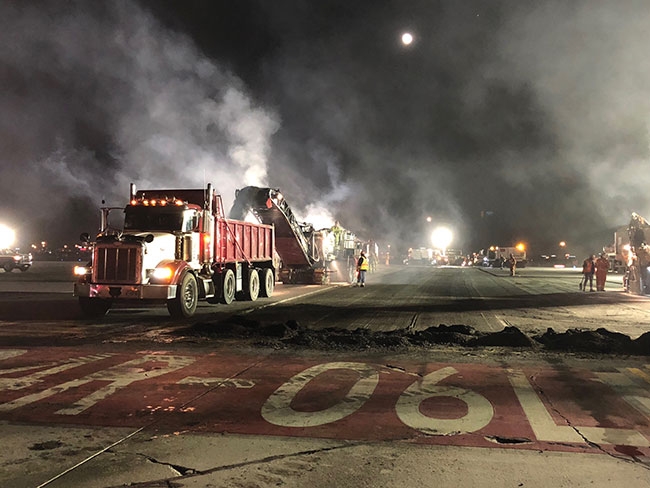 When the contractor began repaving Toronto Pearson International Airport’s Runway 06L/24R on April 23, 2018, the Greater Toronto Airports Authority (GTAA) expected the job to be completed sometime that autumn. But thanks to good organization and skillful work by the GTAA and contractor, they finished the project on May 16.

Like a highway in not-too-bad condition, an airport runway may only need to be milled down a few inches and repaved – sometimes called a shave and pave – to return it to good condition. That was the case last year with Pearson’s 9,697-foot (2,956-metre) Runway 06L/24R, 21 years after its last such rehabilitation.

“Two metres of asphalt – one metre on either side of the centreline – remained in place to avoid impacting the centreline lighting and thus minimizing the nightly scope,” says Samantha Pinto, Airfield Capital Program, Airport Development and Construction.

As well, parts of Taxiways D and D6, plus the holding bays for 06L and 24R, got the shave-and-pave treatment.

“Time was of the essence, so the decision to use four milling crews was based on the design width of pavement restoration,” explains Jerry McLaughlin, project manager, Pave-Al. On average, they milled and repaved an area 33 ft. (10m) wide and approximately 2,461 ft. (750m) long each night.

Miscellaneous work included replacing a runway incursion sensor on hold bay 06L, and replacing pipe, conduit and base cans on taxiway C2. In some of the high-traffic areas, the contractor surrounded inset fixtures with 2-ft. (0.61m) diameter cast-in-place concrete to protect and strengthen the light can extensions.

The GTAA chose to do this project at night, to minimize disruption of commercial air traffic. It closed Runway 06L/24R to air traffic, except for runway crossings, between 10 p.m. and 6 a.m.

“For the first time ever [at Pearson], we [did] a runway restoration program using an overnight closure methodology,” said Natalie Moncur, senior advisor, external relations, GTAA, in late 2018.

Every night was carefully organized to fill the eight hours with as much construction time as possible.

“A series of decision-making conference calls were held both in the morning and again in the evening, to gather input from stakeholders (NavCanada and airlines), to determine whether the weather forecast met paving requirements for temperature and precipitation, and to brief the contractor,” Moncour explained.

Since crews could not enter the active airfield until the start of the runway closure, organizing them for each night’s work was critical for making the most of the time available.

“The contractor had all equipment and trucks staged in a convoy, sequenced in order of use, up to an hour prior to the start of closure, so that once the surface was available, they could immediately set up,” Pinto explains.

The contractor briefings ensured that they understood clearly where the work area would be. The GTAA also gave the contractor a delineation drawing each evening that showed the work area, access and egress routes, flagging for active crossings, and escort requirements. Experienced guards showed the way for the equipment drivers.

As many as 160 personnel and approximately 100 vehicles moved out onto the airfield every night. Their ranks included the two paving crews and four milling crews, electrical crews, a pavement marking crew, a sewer cleaning and inspection crew, and quality assurance/quality control. There were also guards, escorts and GTAA staff, including field electricians, field maintenance, aviation services staff, and the project manager.

An average of 50, 30-tonne Flowboy trailers brought in asphalt from two off-airport plants every night.

“This redundancy [was] part of the risk mitigation strategy to ensure the surface reopened on time [each morning],” McLaughlin explains.

Twenty-tonne triaxles hauled away the milled asphalt to the contractor’s recycling facility to be processed for reuse in MTO Granular A and some binder course asphalt mixes.

To efficiently close out each night’s work, equipment that was no longer needed was removed, and, like mopping backwards and out a door, the last acts of a shift were carefully considered.

“By the time compaction started, most equipment had been removed from the site, except lights. The contractor towed the light towers in front of sweepers to both illuminate the area and remove them from the field,” Pinto says. “The surface opened at [six o’clock] daily, which was typically two-to-three hours after asphalt placement and compaction. In general, we tried to allow the asphalt surface to cool to about 40°C before opening to aircraft traffic.”

Between the high degree of planning and the discovery that the contractor could indeed work faster than the work plan developed by the GTAA, crews quickly got ahead of schedule.

“In planning, production was based on a very conservative estimate of what the contractor could achieve, given the anticipated challenges associated with mobilization and demobilization [at night] to a site where the location changed every shift,” Pinto says. “We worked with the paving contractor to understand their production capability (milling, paving and line painting). If there was no impact to safety and operations, depending on the direction of traffic and where the paving operation was scheduled, and if the contractor was comfortable that they could turn over a larger area, we allowed the contractor to proceed based on their production capabilities.”