Airside improvements at the St. John’s airport include major terrain sculpting and paving 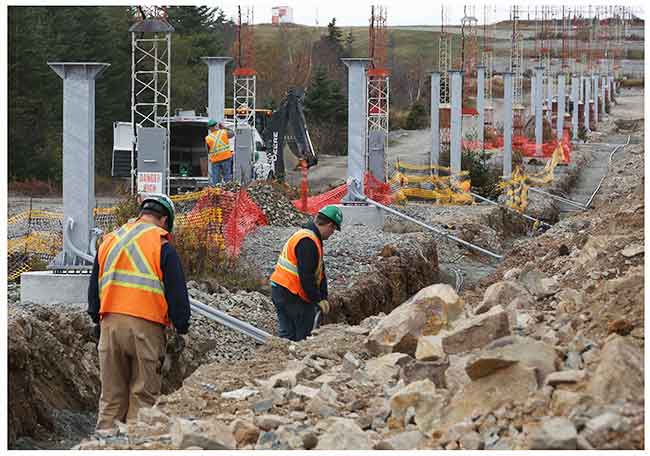 April 27, 2016 – Every perfect, low-visibility touchdown at the St. John’s International Airport since late January this year is thanks to a three-year effort to upgrade both ends of its main runway (11/29) to a Category III instrument landing system.

The CAT III ILS, which includes powerful new approach lighting off both runway ends and imbedded in the runway, additional ground-based equipment, and terrain safety improvements, allows aircraft to land in nearly zero-zero-visibility (vertical and horizontal).

The January milestone marks the culmination of the airport’s three-year, $37.3-million Airfield Accessibility and Safety Initiative. The big push in 2015 to complete the project involved closing down 11/29 for six months, earthmoving, trenching, subdrain replacement, and lighting and wiring upgrades on and around 11/29. The frosting on the cake was a $15.7M “shave and pave” of 11/29 to make an unblemished surface over the many kilometres of new subdrains, wiring and 1,105 inset runway lights.

St. John’s-based Pyramid Construction was the general contractor for the earthmoving and paving. Although the runway, which Pyramid had repaved in 1999, was still two years shy of its scheduled repaving, there was a large amount of cutting required for the trenching and lights. As well, notes Alvin Brake, project manger, Pyramid Construction, “We also did a lot of edge drainage.” Repaving the runway ahead of schedule avoided having to close the main runway twice within two years.

Pyramid installed over 3,500 metres of storm pipe in and around 11/29, which is 200 feet wide by 8,500 feet long. Mississauga, Ont.-based Tristar Electric Inc., and the electrical subcontractor Black & McDonald laid over 100 kilometres of airfield lighting cable. Tristar cored two- and three-foot diameter holes for most of the new inset light cans, and required trenching for the rest. Pyramid backfilled these trenches and holes with concrete level to the runway surface.

The runway action began last June 1 with the closure of 11/29. On July 6, work began in the parallelogram-shaped intersection of 11/29 and secondary runway 16/34. The contractors worked in a 12-hour window from 0900h to 2100h each day, but had to pull back for the international flights using 16/34. Pulling back was not necessary for domestic flights. Since the aircraft used for domestic flights are lighter, they could land and exit the runway further away from the intersection.

The safety planning and coordination required to work on an active runway, plus the poor weather during the two weeks scheduled for the intersection work, meant an incredible workload for the contractors.

As many as 120 people and 80 to 100 pieces of equipment belonging to Pyramid, Tristar and Black & McDonald, were in and near the building lot-sized intersection at one time. “It was one of the more coordinated jobs we’ve ever done. Just in the intersection we had seven crews with pipe. There was so much pressure,” Brake says.

Once everyone completed their subsurface work, Farrell’s Excavating Ltd., used a Roadtec RX-900 cold planer to mill 55 millimetres of asphalt – 24,000 tonnes in all – off 180,000 square metres of the runway and associated surfaces.

Because the 11/29 resurfacing was an all-new mix design, the asphalt was not reused on the runway; rather, Pyramid laid down an eight-inch thick layer of the milled material on airport access roads. Pyramid laid 38,000 tonnes of new asphalt 55mm thick, including that required to pave a 7,000 square-metre expansion of Apron 1, part of an airport terminal expansion.

After Pyramid completed the paving, Tristar returned to core holes over the cans for the installation of the inset lights proper. “This left a nice, neat tidy job with no patching, nothing,” Brake says.

Pyramid’s asphalt plant and 90-acre quarry is only about one kilometre away from the airport. This was convenient, not only for bringing in asphalt and paving equipment, but also for the large amount of earthmoving that Pyramid did (The airport pegs the amount of earth and rock removed at 14,000 standard dump truck loads).

One such task was building Runway End Safety Areas (RESA) off the four runway ends (11, 29, 16 and 34). These 120m wide by 150m long surfaces are designed to give an aircraft a bit more rolling room in the case of a rejected takeoff or if it lands short of a runway. They must be flat, clear of anything that will not easily break off, be soft enough to help slow aircraft, but allow rescue vehicles to enter it.

“This involved stripping off the existing topsoil and unsuitable ground, cutting and filling in. Once we got up to grade, we added a 1.5-inch minus material granular base eight inches thick. This created some stability in case a plane went over it. Then we added topsoil and hydroseed,” Brake explains. The most extensive work was required to build RESA 34, to the tune of Pyramid trucking in 30,000 tonnes of rock fill.

Pyramid did other terrain improvements off the runway ends under the final approach glide paths. “They call it a housekeeping area or pre-threshold terrain improvement,” Brake notes. This work included using dynamite and hydraulic busters to remove rock – as much as four metres down in places.

The blasting was not restricted to certain times. However, Brake says, “We would coordinate with the flight schedulers and the duty manager. We had to provide a fairly extensive blasting plan.”

The new CAT III system includes a very large array of powerful approach lights on each end of 11/29, mounted on towers. These were bolted to 156 reinforced concrete piers that Pyramid built.

The job was completed ahead of schedule and on budget. It will provide a ready runway for the airport, carriers and their passengers for the next 15 years of service.