Many construction firms are sitting on mountains of data, but have little sense of how to use it 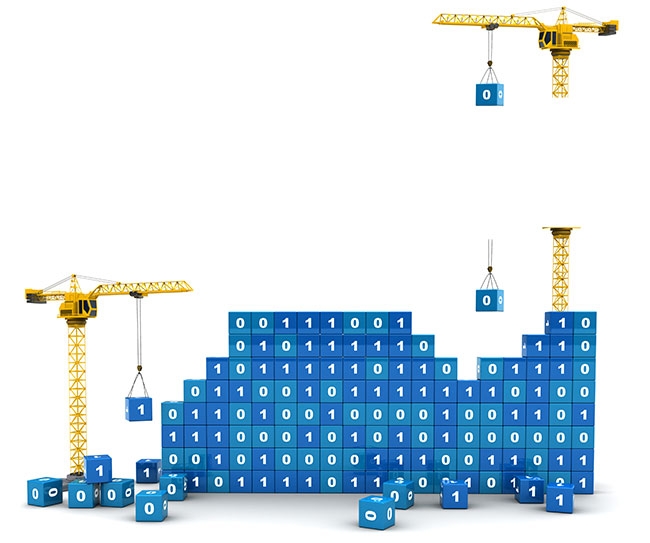 Big data, sometimes touted to as “the new oil,” is one of the most popular technology buzzwords, and also one of the least precise. While there are some familiar examples, such as the gargantuan amounts of personal information retained by the likes of Google and Facebook, there is no accepted definition of what constitutes “big,” nor is there a general understanding of the value it can bring to an organization.

“Like many construction companies, we have a lot of ‘big data,’” says Brian Kmet, senior manager of data and analytics at Edmonton-based PCL Construction. “But I think the term is badly maligned and mis-characterized.”

As Kmet explains, the IT industry likes to describe big data in terms of what are called the four Vs: the sheer volume of data, the velocity with which data is being collected and transmitted, the variety of data types, and the veracity or reliability of the data.

“Those are just characteristics,” says Kmet. “The cause of big data in my opinion, electronically anyway, is that it is in fact cheaper to store data than to throw it away. So in our industry, we often collect a lot of data but do nothing with it.”

Types of data
For road construction companies, there are two categories of big data to consider: data connected with running the various aspects of the business, and data related to the GIS, video, and LIDAR-generated data gathered in site surveys, either by drone or ground-based equipment, or by GIS-controlled grading and earthmoving equipment.

“Our industry has always done a lot of record keeping, so our business practices generate very large volumes of data,” says Kmet. “The important thing is, what do you do with that data, how do you make it accessible, and do you even need it?”

The retention of some of this business data, such as health and safety records, is mandatory. Other components include drawings, submittals, RFPs, RFIs, change requests, change orders, and other project-related documents. Construction firms are at various stages of digitizing this information, complicating the chore of managing it.

The large amounts of site data now being gathered, on the other hand, are new to contractors.

“If you took a traditional surveyor 20 years ago, he’d go out and if he surveyed a thousand points in a day, that was a good day’s work,” says Alan Sharp, business area director for CEC Software Solutions for Trimble Navigation. “Now these modern day techniques using drones and mobile scanners can store millions if not billions of points an hour. So the volume of the data that you’re processing now is many times larger than the traditional survey approach.”

“In the LIDAR scanning situation, you’re collecting 800,000 points per second, and might be scanning a highway live at 80k per hour,” says Trevor Bergmann, CEO of Beechville, N.S.-based AeroVision Canada, “So you can imagine what the files would look like to scan 100 kilometres of a highway, whether from a drone or ground-based mobile system.”

Making the information useful
Leveraging big data, in general, is about gathering, cleansing and consolidating data into a computing environment, and then applying analytic techniques, including artificial intelligence, to help business owners improve their forecasting, optimize their use of resources, anticipate project difficulties, or compare performance of different crews or regions.

Most vendors to the construction industry now provide data management services through the cloud, allowing users to ramp up quickly without upgrading their IT infrastructure, and also, to use user-friendly tools, often available on a smartphone, to analyze the data.

AeroVision, for example, provides, along with site surveys and other drone-based data-gathering services, a cloud-hosted software interface for displaying and analyzing 3D site maps.

Trimble provides, among other software products, a hosted software solution called VisionLink, which brings data together from multiple equipment vendors to enable owners to manage and enhance the productivity of their entire fleets.

On the business data side, the job often involves consolidating data from multiple cloud providers.

“As a cloud-first company, big data for us means the ability to get at data easily and readily,” says Kmet. “Because all of our applications are scattered through various cloud vendors, we have to be able to coordinate that data and get to that data.”

The technical approach PCL uses, which is similar to many larger companies, is to deploy a series of Application Programming Interfaces (APIs), which allow users to consolidate diverse data sources into a single computing environment.

Adoption trends
With demand for data growing “every week, literally” at PCL, Kmet has hired a team of young data experts, typically fresh out of school. In addition to the required data handling skill sets, Kmet looks for people with the right mindset.

“You need people who have a passion for data,” he says, “and are analytically inclined. For me the ideal is not just the technical skills, but the aptitude and the curiosity to see what can be done with data.”

The interest in site-related information has not been as strong, Sharp notes.

Although many Canadian contractors now use machine control, most don’t utilize the data the machines collect, and instead, often send surveyors out to gather the same information, creating unnecessary costs and safety hazards.

“When you have the data coming off the machines, why not use it?” says Sharp. “It uses the same GIS, so it’s just as accurate. And you’re collecting that data continuously as the machine operates.”

Interest in drone surveys of highway infrastructure projects, according to Bergmann, is also at very early stages. However, he notes a recent event that might signal a change in attitudes – the highly successful publicizing of the Big Lift Project, which involved the re-decking of the MacDonald Bridge between Halifax and Dartmouth.

“It was documented like crazy,” says Trevor Bergmann, “and it was shared on social media, with updates left, right and centre. Nothing goes to plan 100 per cent of the time, but as a result of having that awareness, people really seemed to roll with the punches a lot better.”

The fact is, the more people know about a project, the better their relationship to it. As governments seek better transparency in the delivery of public projects, this might turn out to be the best case yet for collecting and sharing site-related big data.