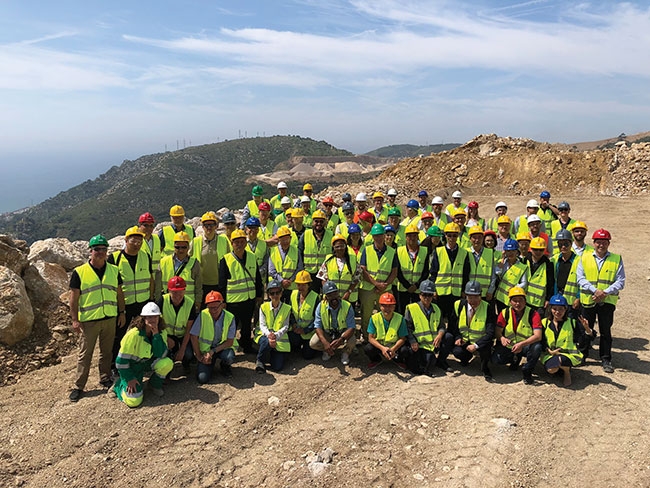 In May 2018, I had the pleasure of attending a conference for the Global Aggregates Information Network (GAIN) in Barcelona, Spain. I received an invitation to attend and participate in this conference by Jim O’Brien, the founder and coordinator of GAIN. GAIN is a voluntary network of national and/or regional aggregates associations.

Its mission is to openly share experiences and best practices while its vision is to promote greater sustainability and performance of the aggregates industry across the globe. GAIN was founded in 2010 and meetings are held every two years. With only a handful of countries at the first meeting, it has since grown to host representatives from 35 countries in 12 regions in five continents.

The conference in Barcelona began with GAIN members each presenting updates of their respective associations, including national statistics, major challenges, and any special programs that are unique for that country or region. GAIN members present at the conference included the United States (NSSGA), Canada (represented by Norm Cheesman, OSSGA and myself representing the ASGA), Australia (CCAA), South Africa (ASPASA), China (CAA), Japan (JCSA), India, Argentina (CEMINCOR and CAMARADELAPIEDRA), Brazil (ANEPAC), Colombia (ASOGRAVAS), and Europe (UEPG, which in itself is a collection of independent aggregates associations representing some 30 member countries).

The conference later shifted focus to case studies highlighting countries that offer good examples of following GAIN’s key priorities, giving an opportunity for other countries to openly ask questions and learn from their success. In turn, separate case studies were brought to the forefront where members who are facing extreme challenges could ask the international community how they may approach or try to address major issues they are facing in the industry in their respective countries.

There are 10 key priorities for GAIN, which formed separate topics of discussion at the conference. They are:

The two-day conference for GAIN was conveniently scheduled together with the European Aggregates Association’s (UEPG) annual meeting, so as a GAIN member, I could voluntarily sit in as an observer and see how the UEPG is structured, and how European countries and associations work together to address key industry priorities. They discussed their 2020 Vision for a sustainable aggregates industry, stressing that the industry will continue to increase efforts towards environmentally friendly and resource-efficient extraction and production; towards an excellent health and safety record; towards good neighbourhood policy; and affording attractive careers for young people. This goes hand in hand with streamlined and smart regulation that will foster renewed economic and construction growth in Europe.

The UEPG has four committees each with various task forces, involving members of the industry from countries across Europe. Two committees follow similar agendas to what we may expect to find here in Canada with one focused on health and safety, and the other on environmental priorities.  I found the other two committees rather interesting as it was evident they each play a very important role for the industry.

The first is an economic committee which focuses on quantifying, representing, and promoting the overall economic impact of the industry, while the second is a technical committee, which is a highly influential body for reviewing aggregate quality standards, recycling, as well as aggregates research and development. Finally, a separate public relations and communications task force also reported to the UEPG Board on actions related to internal (members/associations/companies) and external (decision-makers/partners/stakeholders/large public) targets.

World leader
In December 2018, I was later invited by Mr. Hu Youyi, the president of the Chinese Aggregates Association (CAA) to attend and participate in their international conference in Shanghai. China is GAIN’s largest member producing an estimated 20 billion tonnes of aggregates per year, representing an astounding 40 per cent of global aggregates demand. With the theme of “Green development and building the future together,” this conference welcomed guests from all over the world to deepen international cooperation in the aggregates industry and share innovation achievements to jointly realize progress and development. GAIN is unique in bridging cultural and political differences with a truly valuable exchange of experiences for all parties.

China elaborated on the transformation happening across the country and how the attention to aggregates has grown significantly. For a long time, Chinese buildings used very little aggregates, however there has been a sharp increase in large infrastructure projects with the emergence of urbanization, roads, bridges, etc., and the demand for aggregates grew exponentially. Meanwhile, as China continued to enhance the protection of its ecological environment, thousands of traditional aggregate enterprises have closed, and by November 2018, for the first time in history, there had been a nationwide aggregate shortage.

The shortage resulted in a sharp rise in the price of aggregates and the delay of many large infrastructure projects creating huge losses for firms, with failed project implementations and failed contract performances. Today, the annual output value of aggregates in China is over 2 trillion RMB (or $400 billion CDN) and the transportation cost is over 500 billion RMB ($100 billion CDN), accounting for 1/40th of its national GDP. It is a huge industry! Although the construction of urbanization and infrastructure in China is at a stage of rapid development, the high demand for aggregates is not expected to increase, however it is expected to remain constant over the next 10 years.

While the conference in Shanghai focused very much on technological advancement in the aggregates industry, green mining, and innovation, it also welcomed presentations from GAIN international members, including Europe (UEPG), India, Malaysia, New Zealand (AQA), Canada, and GAIN’s newest member (and first from the Middle East), the United Arab Emirates. The UAE presented an overview of what very well could be the largest aggregates export operation in the world (Stevin Rock), with an annual output of 80 million tonnes.

After attending these conferences and having returned to Alberta, the question that began to cross my mind was why Canada does not have its own association, and should this be something we begin to explore.

Along with India and Argentina, Canada were the only members of GAIN without a national aggregates association.

Now, no one in Canada will debate that we are geographically challenged, and that most legislation is seen at the provincial level, but seeing first-hand what other countries and regions have been able to accomplish in improving both the image and the performance of our industry (such as Australia, Europe, or the United States, to name a few), this can and should also be possible here in Canada. Canada has three provincial associations with Ontario (OSSGA), Alberta (ASGA), and British Columbia (BCSSGA), along with subcommittees representing aggregates interests within Roadbuilding and Heavy Construction associations in other provinces, including Saskatchewan, Manitoba, Quebec and the Maritimes.

Having spoken with each of the associations and industry representatives in the other provinces, it is fair to say there is a lot of interest to get everyone together, and although we can only expect a small informal gathering in the beginning, a simple exchange of experiences between provinces can only help us grow and strengthen the performance of our industry within our own backyards and across the country.

For more information on this article or on GAIN, please visit the GAIN website (www.GAIN.ie) or contact Brent Morrey at bfmorrey@gmail.com.

Brent Morrey served as a member of the ASGA Board of Directors from 2015 to 2018. He represented Canada last year at the GAIN international conference in Barcelona, and at the Chinese Aggregates Association’s international conference in Shanghai. Brent has extensive industry experience in operations and management in major market areas across Canada. He has also supported aggregate operations and new aggregate developments in over 20 countries across the globe. Brent graduated with an Honours Bachelor of Commerce degree and a Diploma of Operational Research at the University of Ottawa. He also holds a Post-Graduate in Quarry Management from the University of Leeds in the United Kingdom.