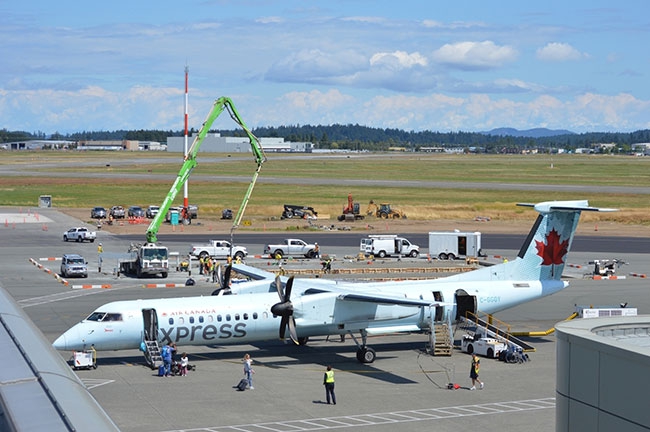 April 3, 2017 – Like mice amongst elephants, contractors tiptoed around live traffic at the Victoria International Airport as they built a new aircraft parking/de-icing facility, rebuilt old parking stands, shifted a taxiway and resurfaced many acres of asphalt surfaces, between August 2015 and October 2016.

On highway projects, contractors set up orange cones and the traffic flows around the job sites, sometimes at great inconvenience. At airports, however, planes reign. During 13 months of airside expansion work at the Victoria airport, great pains were taken to orchestrate the movement of workers and machines to eliminate risk and keep the roughly 385 arrivals and departures a day on schedule.

“The apron for this airport is a very busy place and required a lot of planning to make sure that everyone was not disrupted too much,” says Alex Evans, project engineer for Airports Group Transportation Practice.

As an example of how much work local general contractor G&E Contracting LP had to do, it excavated and hauled away 23,000 cubic metres of soil and clay – 1,800 truck and pup loads of 13 tight cubic metres – to make room for the gravel bases for the concrete and asphalt parking/de-icing facility.

As many as 20 people and an assortment of excavators, trucks, milling machine, pavers, rollers and more, were on the job site on any given day.

“All of our work was done under the watchful eye of airport security and escorts. At any given time, there were two to four escorts to ensure we were in the proper locations and setback, away from the active taxiways. There were also active taxiways we had to cross on a daily basis. We held back when planes were taxiing,” says Mike Sedgwick, operations manager, G&E.

“Every large project at an airport requires a plan of construction, with zones of construction and its restrictions. Some zones were close to aprons and taxiways, where contractors had to work at night. That was unique. That plan of construction is a living document that we and the airport prepare, and Transport Canada sees and approves, so everyone knows how it is to be done,” Evans explains.

The Victoria Airport Authority (VAA) divided the work in two phases: Phase 1, executed between August 2015 and March 2016, included building a new, 17,000 square-metre remote parking stand that would also double as the new, main aircraft de-icing area. This was part of a plan to reduce the demand, and conflicting tasks carried out, on the apron, such as overnight parking and de-icing, preparatory to expanding the footprint of the terminal hold room by 1,400 square metres.

“We have room on the apron to park 15 aircraft, and we have 14 planes [that do]. We did need more overnight parking space,” says Scott Cunningham, director of
facilities for the VAA.

On highway construction projects, heavy trucks track mud and rock far and wide on the asphalt. On airport projects, however, where hugely expensive and debris-sensitive planes roll, this is not acceptable. To help prevent mucking up the taxiways and apron as its trucks came and went from the excavations, G&E built an access road of six-inch (150 millimetres) clear crushed rock laid down on geotextile cloth over the soil and clays. The crushed rock helped clean fine gravel and muck off the tires. It was very successful, with some additional maintenance required.

“We had to ensure the taxiways were very clean and clear of debris, which meant there was constant sweeping,” Sedgwick explains.

Since the airport land is federal property, First Nations were called in to monitor and review the topsoil removal for things like hidden middens and artifacts.

“We’ve been involved in projects where we’ve uncovered burials, tools, arrow heads – lots of stuff, including bodies,” Sedgwick says. But this time, nothing was found.

G&E’s key excavators were Hitachi, models USR 25, ZX160, and XZ135. After removing the soil and clay, G&E laid down large-diameter pre-cast pipes up to 450 millimetres in diameter, PVC pipe up to 600 millimetres in diameter and oil interceptors, some buried as much as four and a half metres deep. G&E also installed a large box culvert as a large square manhole, with a motorized sluice gate valve on the outlet pipe, part of a new glycol collection system.

Another component of the new glycol treatment system, a 20-metre long by 16-metre wide by 0.5-metre deep, 125,000-litre capacity raised pond, was also on the Phase 1 to-do list. G&E used about 250 cubic metres of material excavated from the construction site to build its containment berm.

Victoria-based Lombard Pre-Cast Inc. made some of the pre-cast catch basins and manholes. “They were engineered and designed to suit the heavier load of airport traffic. We also used heavy-duty frame and grates, which needed to be Transport Canada-rated,” Sedgwick says.

Where planes park, surfaces with higher load resistance than asphalt are required. G&E built 141 6-metre by 6-metre by 380-millimetre thick concrete panels, pinned together with 30-millimetre by 500-millimetre epoxy-coated smooth steel dowels inserted every 300 millimetres. The 1,700 cubic metres of concrete used had a specification of 35 megapascals. Workers gave the panels a light broom finish. Langley, BC-based Sealtec used a special machine to install a pre-molded rubber inset between the joints.

Phase 2, executed between May and October 2016, included replacing the asphalt on three aircraft stands with concrete pads. Built the same way as those on the remote parking/de-icing facility, contractors poured 925 cubic metres of concrete. G&E also removed seven existing manholes/catch basins and installed five new ones and 460 metres of new sub-drains.

Phase 2 also called for expanding the apron by 8,600 square metres, made possible by shifting portions of Taxiways A and B. This included about 10,000 square metres worth of asphalt milling and overlay work. G&E also made storm system improvements and upgrades.

As well, G&E rehabilitated 18,000 square metres of existing asphalt areas on Apron IV with milling and a 70-millimetre overlay.

Eighteen base cans for taxiway centerline lighting, installed and paved over in Phase 1, were exposed in Phase 2 so Comox Valley-based Raylec Power LP could install new LED fixtures. Phase 2 included the installation of 59 more base cans and LED fixtures.