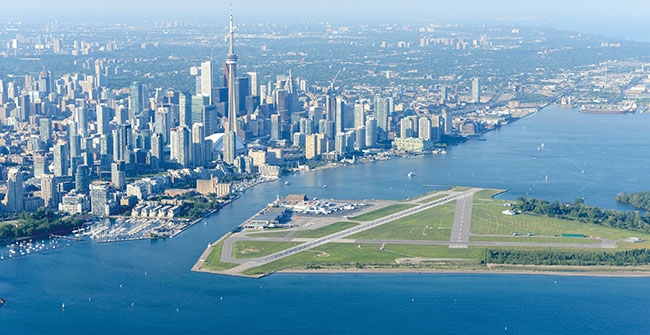 July 24, 2017 – Over the course of several months last year, a barge moved over 100,000 tonnes of aggregate, asphalt and construction materials from a PortsToronto staging yard to a temporary dock located at Billy Bishop Toronto City Airport, situated on an island just off downtown Toronto. The barge was back this summer for three more months, as well as in 2018 for four months.

The materials move is for a three-year, $36-million Airfield Rehabilitation Program (ARP) that includes resurfacing or rebuilding the majority of the airport’s runways, taxiways and aprons, replacing the aging airfield electrical infrastructure and building a ground run-up enclosure (GRE) for turboprop aircraft.

The barge, supplied by McKeil Marine and capable of carrying 600 tonnes of aggregate material at a time, has made it possible to reduce the traffic through Bathurst Quay Neighbourhood (a mainland Toronto area facing the airport) and avoid the constraints that would have come with trying to run trucks through the city core or using the ferry to reach the Island.

The ARP work will require 84,000 tonnes of aggregate, which was brought over in bulk. Pave-Al Limited, the general contractor for the ARP, has been trucking the asphalt, of which 48,760 tonnes will be required, to the airport on the barge.

“The alternative scenario, getting a concrete patching plant or asphalt plant on the island, is tangibly expensive and may contradict with aviation height restrictions. As the barge would be used anyway to transport material, doing the work this way was the best solution,” explains Ahmed Adham, project manager for Pave-Al.

“The barging system is the crown jewel of this project. It allows us to make available space on our port lands and come through an industrial district,” says Gene Cabral, executive vice-president for Billy Bishop Toronto City Airport and Ports Toronto. “The significant number of vehicles required for this project, logistically, getting them through the downtown core, and at night, wouldn’t have been pleasant. We had excellent feedback from the city on this.”

The PortsToronto staging yard, plus the barge, has proven to be a winning combination for Lafarge, which has been trucking in aggregate from its Dundas Quarry and Pave-Al.

“This gives us flexibility to stockpile when the barge is not in operation,” Adham says. “[The yard] provides a spacious area for trucks waiting, material stocking, etc. Also, site operations are mainly on night shifts, which is giving a good chance to avoid Toronto’s traffic issues.”

The 210-acre airport processed 2.7 million passengers in 2016 and handled 124,000 aircraft movements (each landing is a movement, and each departure is a movement).

“About 50 per cent of the movements are Porter and Air Canada. The other 50 per cent is a mixed aircraft fleet, including personal aviation, two Fixed Base Operators, itinerate, flight schools, smaller commercial operators, and Ornge Medivac, which does around 4,500 helicopter movements a year,” Cabral says.

Last year, the first year of the ARP work, Pave-Al concentrated on the runways. Night closures of Rwy 08/26 began on June 15 and Rwy 06/24 was closed entirely. This allowed Pave-Al to work double-shifts and complete the work on both runways in the first season.

“The contractor only had a seven-hour window every night to resurface the main runway. We got it back every morning at 6:45 a.m. for the first departure. Shutting 06/24 down gave the contractor the ability to work two shifts. That was an option we gave when we went out on the market – working 06/24 and 08/26 at the same time,” Cabral explains.

Of the three runways, Rwy 06/24 required the most extensive rehabilitation, as well as being shortened to 2,460 ft. (750m) and narrowed to 100 ft. (30m). Pave-Al removed the pavement and granular material underneath down to the runway core in the centre 100 ft. (30m) of Rwy 06/24, and along its shortened length, then rebuilt and paved it.

“We shifted the [landing] threshold. We no longer have the intersection of the two runways. 24 is now deconflicted from 26,” Cabral says.

Starting at 11 p.m. every night, Pave-Al worked on Rwy 08/26 in sections, milling off 100 millimetres of asphalt and then applying a 150-mm asphalt overlay. Other work on Rwy 08/26 included new runway centerline inset lighting, edge lighting and aircraft guidance signage.

ADB Airfield Solutions and Chatham and Burlington, Ont.-based Liberty Airport Systems Inc. (ADB Safegate) are the suppliers of most of the lighting and electrical equipment. Montreal-based WSP Canada Inc. is providing the planning, design and construction phase inspection services.

Substantial completion was issued for the work on Rwy 08/26 on Oct. 24, 2016. Pave-Al also completed the work on Rwy 06/24 on schedule last year, as well as completing elements of the conversion of Rwy 15/33 to a new taxiway, named Echo, ahead of schedule.

“This shall involve approximately 15,500 tonnes of aggregate, for soil replacement, and 4,000 tonnes of asphalt,” Adham says.

The eastern portion of Rwy 15/33 is also being converted into a 16-ft (5m) service road for access to the south side of the airport. Some of the southern portion of Rwy 15/33 will be converted to overflow aircraft parking positions. Tristar is responsible for installing new electrical infrastructure for Taxiway Echo. The overall project includes over 400 new lights, including LED edge lighting and aircraft guidance signage, and over 20 kilometres of electrical cabling.

The GRE is a three-sided enclosure for running up turboprop engines. It measures approximately 66m by 63m, with wall heights ranging from 11m to 14m. Its design and construction was done by Reno, Nev.-based Blast Deflectors Inc.

Pave-Al began working on its contribution to the GRE’s construction last year. For the strip foundation, it poured 675 cubic metres of concrete. The floor of the GRE required 840 cubic metres of Portland Cement Concrete Pavement (PCC). It was poured in 6.1-metre-wide strips. Pave-Al first poured every other strip, then poured the remaining strips.

“The design and execution included dowels in between the strips to maintain elevation and avoid any differential settlement,” Adham explains.

Pave-Al will complete all runways-related work this year. Next year’s tasks include widening the south end of the commercial apron by 11.5 metres, rehabilitating Taxiways Charlie and Foxtrot and reconstructing commercial apron pavements. Repairs will range from shave and pave to full-depth reconstruction of deteriorated pavement.