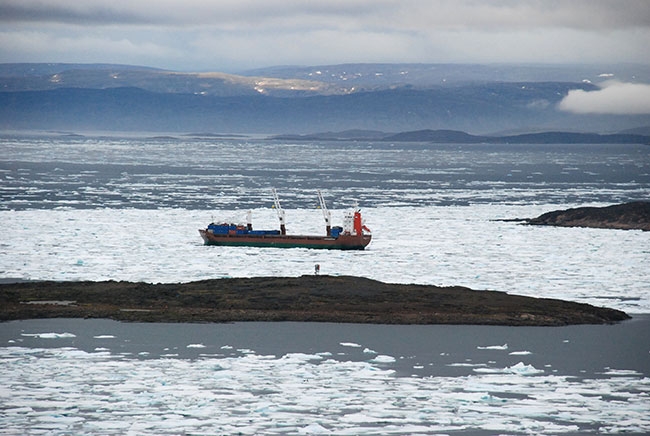 The capital project, and the operation of the airport for the next 30 years, is a public-private partnership, which will be run by the Arctic Infrastructure Limited Partnership (AILP). Its shareholders and equity providers are InfraRed Capital Partners Limited, Bouygues Building Canada Inc., Colas Canada Inc., and the Winnipeg Airports Authority.

Nunavut Airport Services Ltd., a subsidiary of the Winnipeg Airports Authority, has the main responsibility for airport operations, maintenance and other deliverables over the next three decades.

The old terminal was hopelessly outdated, and the airside infrastructure was in poor shape. The lighting and electrical system was past its prime, the runway was long overdue for resurfacing, and there was considerable subsurface deterioration due to permafrost melting and subsurface drainage issues.

The scope of the airside work included full-depth repairs to the runway, apron and taxiway, with insulation. On the runway, for example, this required excavating the subsurface in areas where permafrost has melted, removing all thawed soils, adding synthetic insulation to reduce further melting and backfilling with non-frost susceptible granular materials.

Around 400,000 tonnes (approximately 440,900 tons) of fill was required for the airside work. Iqaluit-based Kudlik Construction Ltd. handled the rock crushing, water and sewage work, and Arctic Tower Ltd., also based in Iqaluit, did much of the trucking and excavating.

Sintra did most of the paving, which required 100,000 tonnes (110,230 tons) of gravel to make the asphalt. Approximately 420,000 square metres (4.5 million square feet) of asphalt was laid. Like all the other construction materials, and some of the construction equipment, the bitumen for the asphalt, more than 27,000 barrels worth, was brought in by sealift.

“Construction activities started around May 2014, beginning with excavation and earthworks for both the buildings and civil works. Building materials and construction equipment began arriving by sealift in August 2014,” says Iqaluit Airport manager John Hawkins.

Work also began on the construction of Taxiways A and G, and the northern section of the Apron 1 extension before the fall 2014 freeze up.

Located at 65.75 degrees latitude, Iqaluit has long daylight hours in the summer. On July 1, for example, the sun rose at 2:21 a.m. and set at 10:53 p.m. At the peak of construction, work was scheduled day and “night” to take advantage of this.

The logistical challenges for a project of this scope in Northern Canada are daunting.

There are only two modes for bringing anything into Iqaluit: plane and ship. The former is extremely expensive, and the latter can only operate in a window of opportunity lasting just a few ice-free months. In 2015, for example, the shipping season only lasted from around July 20 to the end of November. If something misses the shipping season, it either waits until the following year or is flown in at high cost. For example, in 2015 some bitumen and electrical equipment for the project had to be brought in by Boeing 767.

Adding to the challenge is Iqaluit’s lack of a wharf. Ships carry their own portable port infrastructure kits, which include tugboats, barges and forklifts. Crews race to unload cargo onto the beach before each high tide shuts them down until the next low tide.

Nunavut Eastern Arctic Shipping (NEAS), out of Valleyfield, Que., and Nunavut Sealink and Supply Inc. delivered most of construction materials and some construction equipment, such as an asphalt plant, milling machine, and several asphalt pavers.

Civil engineer of record Kevin Hodgins and civil engineer Leslie Merrithew, who work for Stantec, sketch a scenario that illustrates the logistical challenges:

The design/build team had to prepare months ahead of construction season to obtain materials or equipment. Let’s consider the life of a simple 200-millimetre diameter insulated water pipe. We needed about 310 metres for this project.

The contractor would have to order the pipe from the supplier, who makes it and then sends it to the company that insulates it. After, the pipe would be trucked to the port city where the barge is waiting to ship it to Iqaluit. This must happen before the end of May when the ship sails.

Once on the barge, the ship must wait for the sea ice to melt enough to create a path, but unfortunately Iqaluit is protected by Frobisher Bay, which stays iced up well into late June, early July. So now it’s July and the contractor finally has his pipe. It gets stored for a few weeks and installed in August, when all of a sudden, a change order comes in to re-route the line. This makes the overall route 360 metres.

Where does the contractor get the extra 50 metres of pipe? Not in Iqaluit, that’s for sure! So they have to scramble to order more material in time for the very last barge, which leaves port in mid-August. But the pipe still needs to be sent to the insulator, and then trucked to the port city. Once on the barge, everyone crosses their fingers that the Bay stays open until it arrives in October.

In the past, this has not always been the case. If the barge cannot get into Iqaluit, it goes back to the port city. The contractor can then decide if the material is important enough to fly up on a cargo plane, or if they simply wait for next year. Construction in the North is like the Olympics of logistics!

On-site, construction crews had to work around the airport’s flight schedule, and grapple with some interesting language issues.

As the airport has only one runway, it was repaired in sections, with a minimum of 1,829m x 31m (6,000ft x 100ft) of usable runway always available,” Hawkins says. “Basically, work was undertaken on one end, and then the runway was split down the middle, and work was completed on one side at a time, Work was done with the night closures, and [the runway] put back in operational condition before the first flight each morning.

Hodgins and Merrithew add that the reconstruction of the runway had to happen over a three-year period with a third of the runway shutting down for a 30-day period each year. They said that the logistics of planning the construction, advising the pilots and other authorities meant that the runway works required a team of problem-solving individuals who could react on their feet and find solutions that were both timely and cost effective.

With both English and French speakers – some of them unilingual – among the civil contractors and design team, conversations could get interesting, according to Hodgins and Merrithew.

They stated that most of the civil design team are native English speakers, with a few who speak French as a second language, which sometimes created a language barrier that needed to be overcome.

However, the design/build team worked very hard to communicate effectively and have successfully collaborated throughout this project to understand each other, the two stated.

“Together, we [worked] towards a common goal of delivering a quality product that we can all be proud of.”