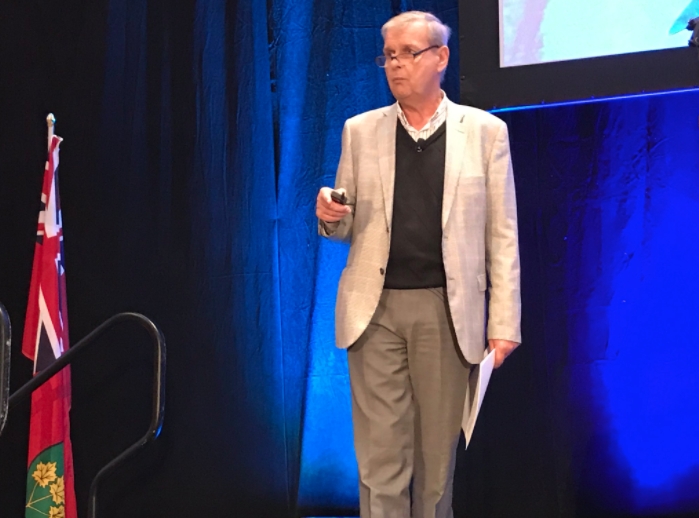 February 6, 2018 – Navigating the future was the theme of the Ontario Road Builders’ Association’s 91st Annual ORBA Convention & AGM held at The Fairmont Royal York in Toronto on Feb. 5 and 6.

Russ started by telling the crowd that he sees some significant changes facing the roadbuilding industry in the next little while, but that he believes the outlook in Ontario is fantastic – his evidence stemming from Infrastructure Ontario’s projected spending.

“Their big spend for the first time ever is not focused on social infrastructure, it is on transit and transportation – 51 per cent of their $18-billion budget is in those areas,” he told the crowd.

Although there is greater opportunity in the province, he added that there is also greater competition, for the first time, at a global scale.

“There is a reason that foreign companies are buying up our capabilities, and it isn’t because there’s no work to come,” he told the crowd. “The Irish are here, the French are here, the Chinese may be here. This is one of the last strongholds of significant infrastructure spend anywhere in the globe.”

Russ warned attendees not to get too far ahead of themselves related to preparing for upcoming projects, since there are always delays in regards to projects getting rolled out.

“We have an election coming up, which will impose its will or change some of the scenarios, but what we will end up with is a terrific marketplace for civil construction,” he said.

Even if you have the ability to bid, Russ adds that companies should focus on trying to land the projects they can excel best at, not necessarily the ones with the most dollar signs attached to them.