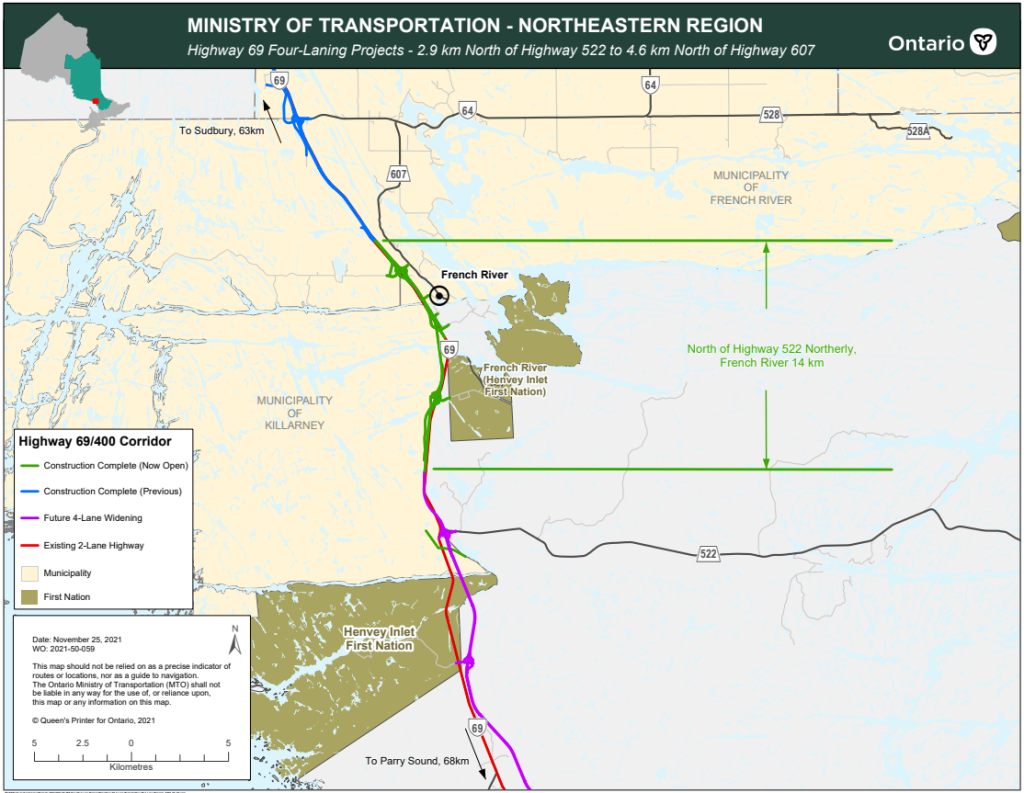 The Ontario government opened a new 14-km expansion of Highway 69 in the French River area, south of Sudbury.

The road project expanded the highway from two to four lanes to help improve traffic flow and safety, as well as support economic growth and prosperity in Northern Ontario.

“As we build Ontario, it’s critical that we continue to expand and improve highways across the province,” said Ontario Transportation Minister Caroline Mulroney.

“In Northern Ontario, Highway 69 plays a vital role in helping people and goods move more quickly. By expanding the highway, our government is following through on its promise to support the economy and improve road safety.”

“The opening of the new Highway 69 lanes is a gamechanger for French River and Sudbury residents,” said Greg Rickford, Minister of Northern Development, Mines, Natural Resources and Forestry and Minister of Indigenous Affairs. “By expanding this section of Highway 69, we will see improved safety and traffic flow in the region. The expansion will also create jobs and boost economic growth in Northern Ontario.”

“Our government is building Ontario with investments in critical infrastructure that improve our health, safety and quality of life,” said Kinga Surma, Minister of Infrastructure. “Over the next 10 years, we are spending more than $148 billion on highways and public transit, as well as schools, hospitals, long-term care facilities, and other public infrastructure that families and businesses depend on.”

In 2020/21, the province is committing $625 million to expand and repair northern highways and bridges, estimated to create or sustain about 4,370 direct and indirect construction jobs for the people of Northern Ontario. The ministry has several projects underway to expand northern highway corridors, such as Highway 11/17 between Thunder Bay and Nipigon, and Highway 69 south of Sudbury.

About $10 million in additional funding has been committed for northern highway rehabilitation projects as part of Ontario’s Action Plan: Responding to COVID-19.