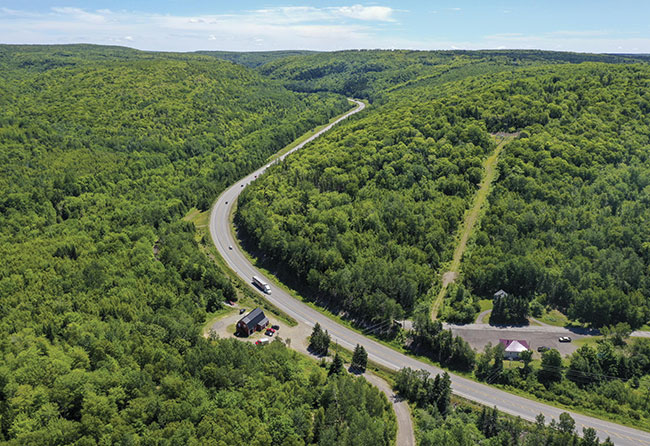 Construction has started on a $718-million venture to twin Highway 104 in Nova Scotia from Sutherlands River east of New Glasgow to Antigonish.

The thoroughfare, part of the Trans-Canada Highway, is one of the largest infrastructure projects in the history of the province.

Road building crews are presently working on the first phase of the project between Antigonish and James River which involves cutting and putting down a new roadbed and surface and building infrastructure.

“There’s a lot bigger dozers and excavators than I’ve seen on any projects in the province in the past,” says Bradley Cleary, P3 construction and operations manager for Nova Scotia. “They have a considerable amount of earthworks done and a lot of work done on the structures.”

The project is novel in that the province is using a P3 model in which the responsibilities for designing, building, financing, operating and maintaining (DBFOM) the highway for 20 years was awarded to a single firm. Dexter Nova Alliance, led by contractors Dexter Construction and Nova Construction, won the bid last May.

The arrangement allows Alliance to control the schedule of the project. Ownership remains with the province but the partnership will be responsible for repairing potholes, repaving and snow removal.

This stretch of highway is the province’s most important transportation corridor and also one of the deadliest. There have been 391 collisions, including 19 fatalities on the untwinned portion of the highway since 2009.

“It’s been a dangerous stretch of highway for a long period of time, so it’s really a safety concern and that’s one of the reasons that this alternative procurement method was selected for this project,” explains Cleary. “We really wanted to expediate the construction and the design, build, finance, operate and maintain model was a fast way of getting the work done compared to our traditional methods. We are going to get it built quicker and we can have a safer highway for the people of Nova Scotia.”

Steve Warburton, spokesman for the Department of Transportation and Infrastructure Renewal, says the twinning project will save lives and enhance road access for Nova Scotians.

“We chose a P3 model for this project due to the efficiency, cost accountability and clarity these contracts provide. This project will also create hundreds and hundreds of direct and indirect jobs.”

Cost of the project includes $364.3 million for construction and $196.4 million for ongoing operations and maintenance and a major upgrade of the existing stretch of highway during the 20-year operating period. Insurance, professional fees and financing and other costs make up the remainder of the total bill.

The federal government is contributing $90 million to the project under the National Trade Corridors Fund.

“This project will save lives and provide travellers and business with a high-quality highway for many years to come,” says Transportation and Infrastructure Renewal Minister Lloyd Hines. “A safe and efficient highway system is essential to the economic and social well-being of Nova Scotia. Our partnership with Dexter Nova Alliance will deliver on that goal.”

“This important project will create hundreds of good paying jobs and will foster long-term prosperity in our communities. Most importantly, upgrading this highway will save lives by significantly improving the safety of one of our region’s most dangerous stretches of highway.”

COVID-19 has caused some headaches for the general contractors, but they’ve been able to keep going with the design work. They’ve adopted a daily hygiene checklist to ensure equipment is sanitized, masks are enforced when social distancing isn’t possible, and hand sanitization stations are available. 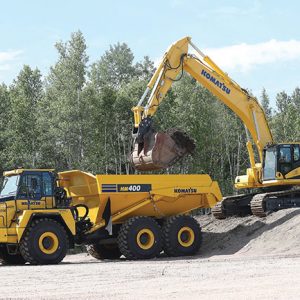 The P3 Project is expected to save lives. There have been 391 collisions, including 19 fatalities on the untwinned portion of the highway since 2009. Photos submitted. 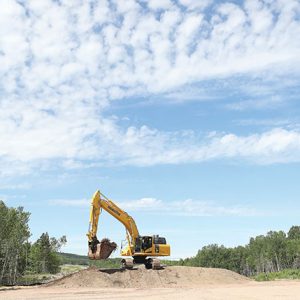 Ken MacLean, vice-president of Dexter Nova Alliance, says he is looking forward to seeing the long-anticipated work move towards completion.

“This is a significant project that will have a positive impact on our province for decades to come. It will be built by Nova Scotia-based companies for Nova Scotians and we are proud of that.”

Joe MacDonald, chief of Barneys River Volunteer Fire Department, says twinning of the highway is a very important steps towards safer highways in Nova Scotia and one of his dreams come true.

“After many lives lost and changed forever, we are moving towards safer roads between Sutherlands River and Antigonish.”

The project has been in the works since 2015 when a review was done and it was determined that the province should look at twinning a number of its 100-series highways to make them safer. A feasibility study was done and, after receiving input from the public, the province chose a route and P3 model for the venture.

While there are varying P3 models to choose from, the province selected the DBFOM approach, and in July 2018 pared the number to three preferrered bidders. An RFP was issued in early 2019 and Dexter Nova Alliance was announced as the winner of the project in early 2020. The construction contract is a fixed-price turnkey contract and there are no provisions for payments in excess of the contracted price.

A tricky part of the build is twinning the highway while it is still in operation. The plan is to build the twinned portion of highway and, once completed, flip traffic to the new segment while the existing section is repaired and repaved. Once finished, all lanes on both segments will be opened to traffic.

An especially challenging section is a 10-kilometre stretch between Barneys River Station and James River where there are large hills. A new four-lane highway will be built up and over the hills to the south of the existing roadway.

No detail has been left unchecked and that includes looking after wildlife in the area of the highway build. Measures are being taken to protect moose, deer and turtles along the route.

“This project is going to have more features for accommodating wildlife than any project we’ve built in the province before,” says Cleary. “We’re going to have three primary mammal crossings. In places where there’s bridges over water, we’re going to put a three-metre path on each side to allow for deer to cross. We’ll make sure that the deer don’t have to go up on the road. They can go underneath the bridge.”

One of the underground crossing structures will be built extra large to accommodate moose. Equally important, when installing underground crossings, 25 metres of fencing and tree cover will also be set in place. Animals like deer and moose typically walk along the tree cover because they don’t want to be seen.

“They don’t like to go out in the open so they stay in the trees and they’ll walk and they’ll follow the trees,” says Cleary. “That’s another way where’s there’s no fencing to guide them to where you want them to go.”

Completion date for the project is 2023.