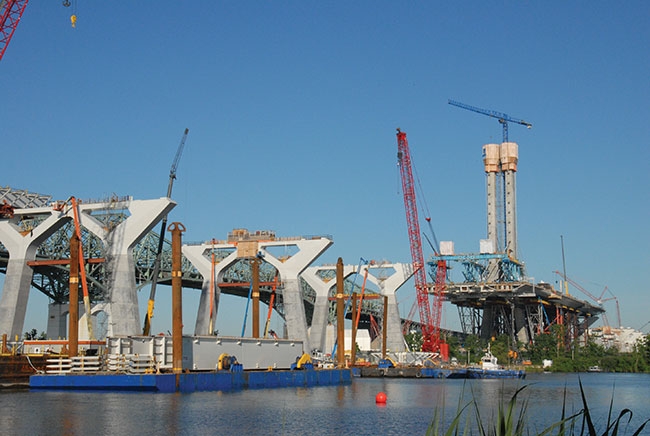 At 5 a.m. on June 24 – Fête Nationale du Québec – cars got the green light to begin rolling inbound across Canada’s newest bridge. A week later, on Canada Day, the outbound lanes opened to traffic. Beside it, the original Champlain Bridge, in all of its architectural glory, now sits empty, awaiting dismantling.

The 3.4-kilometre, $4.5-billion bridge, expected to eventually carry 60 million vehicles a year, connects the South Shore (which is on the east side of the Saint-Lawrence) with the Island of Montreal. It replaces the old Champlain Bridge, which opened in 1962. The bridge has been carrying some 50 million vehicles a year in a critical transportation corridor between the eastern United States and Canada.

Signature on the Saint Lawrence Group (SSL) now has a few months to tie off loose ends such as completing the pedestrian and bicycle path, with its four observation points, lighting, landscaping and removing the three huge construction jetties from which work was simultaneously carried out on the east, west (Nun’s Island) and centre of the bridge.

Still further down the road, there is work to complete down the centre of the bridge to accommodate light rail transit trains on a 26-station, 67-kilometre-long system, called the Réseau express métropolitain (REM). Currently under construction at building sites on the South Shore and Montreal Island, the REM will come into service on a phased schedule; the automated trains are expected to start running across the new bridge from South Shore stations to the Bonaventure-Central Station – Montreal’s central hub for its metro, train and bus systems, in 2021.

While the Samuel de Champlain Bridge is the main attraction of this project, much highway and bridge work had to be done to connect it to the highway system on Montreal Island. For example, SSL built the Nun’s Island Bridge, which is about 500 metres long and 24 to 25 metres wide.

“[It] is in fact two bridges: the northern deck and the southern deck. The southern deck is a four-lane bridge that takes all the car traffic from downtown Montreal to the South Shore. The northern deck is a three-lane bridge that takes all the vehicular traffic from the South Shore into downtown Montreal. Apart from the Nun’s Island Bridge, there are another 15 bridges that [had] to be demolished and rebuilt from Nun’s Island to the Turcot Interchange,” says Liam Carter, construction manager of Nun’s Island Bridge.

The old Champlain Bridge, completed in 1962, has reached the end of its useful life, with reports that over $300 million has been spent to keep it in safe-to-use condition. The new Champlain Bridge, however, has been built to last 125 years. “I often hear workers coming and telling me they’ve never seen construction techniques or quality requirements like we are doing here. I am just replying [to] them, ‘It’s normal.’ We’ve never built for 125 years like its required here,” says Sylvain Tremblay, area manager of the pre-cast yard.

SNC-Lavalin reports that the bridge required 8.5 million hours of work, 2,000 employees and  154,000 tonnes of concrete.

The bridge sits atop 74 piers (37 pairs), which in turn rise up from pier footings. Thirty-eight were prefabricated in huge tents on the Nun’s Island jetty and positioned by global heavy-lifting specialist Sarens. The other 36 were poured in place. The footings weigh between 600 and 1,000 tonnes and measure 9 by 9 by 2 metres. Including the pier starter atop each one, the assemblies are as much as 14 metres high.

As for the piers, Jad Kfouri, project coordinator, says, “Each pier varies from three to eight segments. Each [segment] is 65 to 70 tonnes. The highest pier, close to the cable stay bridge, has a height of 35 metres.” And atop each pair of piers is a W-shaped (or two Ys) steel pier cap, weighing around 400 tonnes apiece and measuring 11 by 3 metres, that ties them together and transfers the weight of the bridge down to the foundations and river bed.

The bridge was built from 601 steel box girders, averaging 35 metres in length, three-and-a-half metres high, and three to four-and-a-half metres wide. Their weight, which range from 50 to 80 tonnes apiece, contributed to the construction schedule being set back by six months. SSL had planned to move box girders across the Champlain Bridge, only to be told later that many of them exceeded the bridge weight limit. The construction delay (there was also a crane operator strike) and unexpected cost, and time spent, of moving them by ship and rail precipitated a lawsuit, a roughly $95-million settlement and additional monies from the government for measures that would recover some of the lost construction time.

Atop the box girders workers laid over 9,600 concrete deck slabs weighing from five to 45 tonnes apiece, followed by waterproofing, asphalt and line painting, some of which was completed barely before the bridge opened.

The cable-stayed, centre section of the bridge, easily located by the harp-arrangement of the cables that support it, is a 500-metre, uninterrupted span that clears the Saint-Lawrence Seaway. It includes 15 huge segments measuring 12.5 metres wide, 60 metres long and weighing around 850 tonnes/apiece. “Such big segments are probably the largest ever installed on any cable-stayed bridge or similar structure. This section of the new Champlain Bridge is definitely one of the biggest challenges of the whole project,” says Frédéric Guitard, area manager, cable-stayed bridge.

The main pylon, from which 15 pairs of cable reach down to the bridge deck, rises 170 metres from water level, just a bit higher than the Olympic Stadium. Its foundations include 42 main shafts drilled 10 metres into the rock. The lower sections of the main pylon were prefabricated. The upper pylon was cast-in-place.

Despite the challenges – strikes, weather, thousands (as many as 5,000, according to some reports) of defects that had to be corrected, the new bridge, with its swooping curve across the river, is done.

“We were faced with an incalculable amount of challenges, but every one of them has been solved,” Guitard says. “I am extremely proud and I think that everybody is extremely proud to have worked on such a project, which is a once-in-a-lifetime opportunity for most of us.”