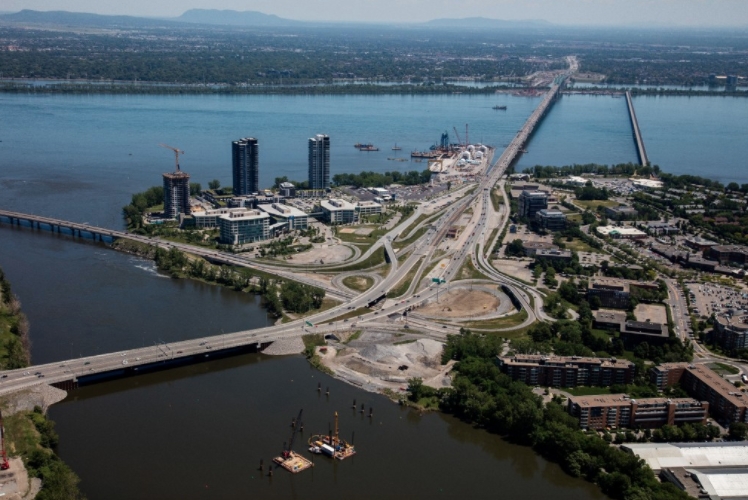 Photo: Signature on the Saint Lawrence/www.newchamplain.ca

October 20, 2017 – Infrastructure Canada participated this morning in an update on the construction of the new Champlain Bridge with its private partner, Signature on the Saint Lawrence (SSL) and The Jacques Cartier and Champlain Bridges Incorporated (JCCBI), which is responsible for managing the existing Champlain Bridge.

The project update highlighted the many areas of progress on the worksites of the new Champlain Bridge since its launch in June 2015:
•The main pylon of the cable-stayed bridge is progressing very well with the final lifting of its upper cross beam last July and construction of the main span has started.
•Installation of all of the bridge’s marine foundations was completed last July, and the piers, which are supported by them, will be completed in October.
•Several pier caps have been installed over the water and on the cable-stayed portion of the bridge.
•The first box girders of the bridge’s superstructure were installed on the pier caps in September.

As mentioned during the update, the schedule for the new Champlain Bridge project has been put under pressure, due notably to challenges related to the transportation of oversized pieces and more recently, the summer 2017 strikes that affected the Quebecconstruction sector.

Despite major progress recently at the worksite, the Government of Canada is taking all the steps necessary to ensure that the safety of the existing Champlain Bridge is not compromised in any way, while maintaining uninterrupted service for users and ensuring sound management of public funds.

In order to have a complete understanding of the situation in the event of a delay, the Minister of Infrastructure and Communities asked JCCBI to assess the possibility of extending the length of service of the existing Champlain Bridge.

In light of the challenges facing the project and the evaluation prepared by JCCBI’s expert consultant, the government is supportive of SSL’s decision to implement acceleration measures in order to complete the bridge in December 2018, as originally planned.

“I am pleased with the progress at the worksites of the new Champlain Bridge in the past few months. The safety of users of the Greater Montreal road is a priority for the Government of Canada as is ensuring continuity of service for users and sound management of public funds,” stated Minister of Infrastructure and Communities Amarjeet Sohi.

The new Champlain Bridge will have three corridors: one for public transit (central corridor) and two for vehicle traffic. The Government of Canada’s holistic approach to durability will give the new bridge a useful life of 125 years.

The Champlain Bridge is safe and continually being monitored. In recent years, The Jacques Cartier and Champlain Bridges Incorporated has implemented an effective reinforcement plan for the bridge. Its innovative measures and leading-edge expertise in the repair of this infrastructure have ensured that the structure of the bridge is safe.