News
Birth of a Bridge

The groundwork is being laid for the New Champlain Bridge 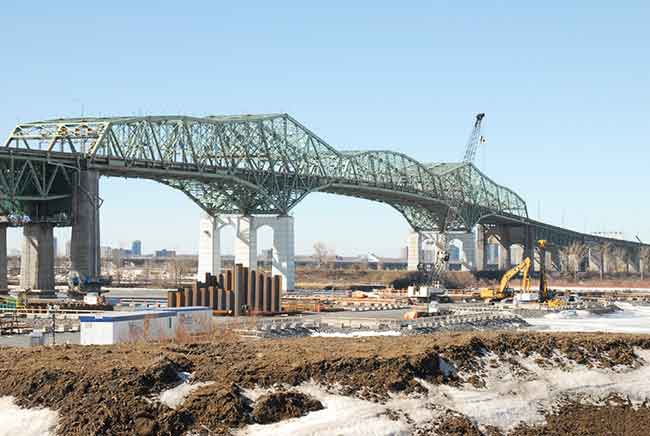 April 27, 2016 – The delivery of 950,000 tonnes of rock to create three construction jetties, last year and this, have set the stage for the beginning of construction of what is currently being called the New Champlain Bridge.

The 3.4-kilometre long bridge, scheduled for completion by the end of 2018, will be a sleek, cable-stayed structure that will replace the old Champlain Bridge, the busiest in Canada and a critical structure in the economic corridor between the Eastern United States and Canada.

Sadly, the old Champlain Bridge is not actually old, at least in calendar years. Completed in 1962, it is but a babe compared to the 86-year old Jacques Cartier Bridge, with its spectacular steel superstructure that carves graceful lines across the skyline just downstream on the St. Lawrence River, or the much older Victoria Bridge nearby.

But thanks to a lowest-bid tender, and the ultimately doomed design of approaches to the main structure built of concrete girders, now riddled with salt and water damage and impossible to properly repair, the Champlain Bridge is on life support with a multi-billion dollar price tag, and just one good earthquake away from collapsing into the river. (Former Federal Infrastructure Minister Denis Lebel announced the cost would be $4.23 billion for the entire corridor project in June of 2015).

The New Champlain Bridge will have a lifespan of 125 years. It is being built as a public-private partnership between the Government of Canada and a consortium led by SNC-Lavalin called the Signature on the Saint-Laurent Group. It is composed of SNC-Lavalin, ACS Infrastructures and Hochtief.

The Government of Canada hired the consulting engineering firm Arup, which in turn engaged the services of the firms Dissing+Weitling and Provencher Roy to develop the bridge’s geometry and shape.

Preliminary work
Once the decision was finally made to build the new bridge, the most visible action for residents on the South Shore – the Brossard side of the river – was Hydro Quebec’s shifting of a section of a 315-kilovolt power line about 70 metres away from the Champlain Bridge, onto new towers. Hydro Quebec completed that work in the fall of 2015.

At the same time, the jetties were growing in the shadow of the Champlain Bridge: two out of opposite riverbanks, and a third out of the side of the St. Lawrence Seaway dike. Made with rock trucked and shipped in from a local Lafarge quarry (it will be returned to the quarry once the bridge is completed) they are already packed with tall cranes, vehicles and the largest “abris,” or snow shelter-like buildings Quebecers have ever seen.

The east jetty, on the South Shore, is 425m by 96m. It will serve as a dry bed for the construction of the eastern portion of the new bridge, with easy access from Highways 132 and Autoroute 10. It is a hive of activity, and the nearby acreage between the new Hydro Quebec towers and the bridge approach is packed with supplies, vehicles and a growing hill of earth.

Just a couple hundred metres from the east jetty is a third 200m by 250m jetty. It is the work area for the cable-stayed tower part of the bridge over the Seaway, which includes a 160-metre high, tuning fork-shaped pylon, from which the bridge cables will hang. The approaches to this section of the bridge will be of a concrete box girder design.

Signature on the Saint-Laurent announced last December that it had completed drilling the 42 piles, to an average depth of 20m and 1.2m in diameter, for this pylon. The piles themselves will be made of steel-reinforced concrete. The pylon foundation construction began this year.

The west jetty, 500m by 100m, on the Montreal side of the river, is referred to as the prefabrication area. It is here that contractors poured the first of 38 concrete footings for the bridge last December. The pour for the 11m by 11m by 2m thick footing, weighing 605 tonnes, took six hours. This first footing will be transported and set on the river bottom this spring.

To move the footings and pier components from the prefabrication area, U.K.-based Dorman Long Technology built a purpose-built transporter called the DL-MT1000 Mega-Transporter. The 10-axle, machine can carry 1,600 tonnes. Because the 40 tires can swivel like casters, the machine can turn in any direction, including within its own length. It lowers its bed, goes under the load, jacks itself up and takes away the load.

Next, a double row of Y-shaped bridge piers will be built on the footings. Their construction will be a combination of poured-in-place and prefabricated sections. On top of the piers three side-by-side decks will be built. Compared to the old bridge, which endures traffic far beyond its design capacity, the New Champlain Bridge will be a luxury of lanes.

The old bridge has six lanes – three inbound to Montreal and three outbound to the South Shore. One lane, however, is reserved during the morning and supper rush hours for transit buses, exacerbating the congestion.

The New Champlain Bridge will have three separate vehicle decks on one level: a two-lane centre deck exclusively for buses (convertible to a light rail system), with a three-lane deck for trucks and cars on either side. There will also be a pedestrian and cycle walkway.

The New Champlain Bridge is said to be one of the largest construction project in North America. Signature on the Saint Lawrence says that it will be employing almost 1,000 construction workers on the Champlain Bridge Corridor project that began last fall. Elsewhere, it is reported that the project will create about 30,000 jobs.

(In addition to the bridge proper, there are several side projects; e.g., the demolition of the Île-des-Soeurs Bridge and removal of 60,000 tonnes of material, and the building of a replacement bridge; the demolition of some overpasses; and the relocation of water mains.)

The benefits to companies that support infrastructure projects are huge. As a small example, the project will require 30 cranes, some extending well above the deck of the current bridge, and over 50 crane operators. Quebec-based Canam Group estimates that it will need to supply as much as 45,000 tonnes of steel, with a value exceeding $200M. Then there is Drummondville-based Béton Préfabriqué, which Signature on the Saint Lawrence notes will be supplying prefabricated concrete parts.

The project schedule is demanding, and the bridge will begin taking shape this year; e.g., the main pylon will begin to rise, although it will not be completed until 2018. The fabrication and installation of the footings, piles and header joists has begun, and will be completed in the summer of 2017. We can even expect to see some of the superstructure and deck put into place before the end of this year, although this will not be finished till the spring of 2018.

And perhaps by then the federal government will have decided whether to meddle with the name of the bridge (its first attempt at renaming it the Maurice Richard Bridge was not well-received) or leave Samuel Champlain in peace.

There will be many loose ends to tie off, including work on the north- and southbound A-15, tying in the bridge to the A-10 and finishing work on the bridge. And, once the new bridge is built, the dismantling of the old bridge will begin, further extending the payday to the hardhat industry.