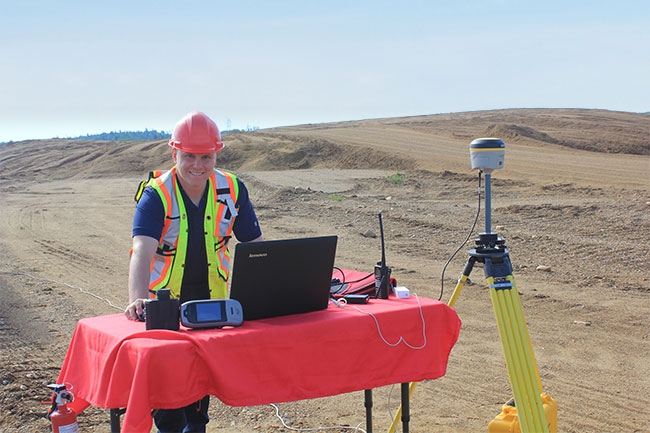 July 28, 2017 – Les Helm has been working in Canada’s resource sectors as long as he can remember. His father, who worked as a logger in the Ucluelet, B.C. on Vancouver Island, first introduced him to the forestry sector as a small child. Helm quickly followed in his father’s footsteps, joining him in the bush.

“I started in road building when I was 14,” Helm recalls during an interview at his office in Lac La Biche, Alta.

Growing up, he continued working with his father learning the ins and outs of the logging business and enrolled at British Columbia Institute of Technology (BCIT) after high school, and graduated from BCIT’s forestry program in his early 20s. Since that time, Helm has worked a wide variety of forestry and other resource-related jobs including spacing, layout, planting, layout of salvage timber and road layout and engineering in B.C. and Alberta, and has run three businesses of his own over the years.

It was his experience in road building and forestry combined with his entrepreneurial spirit that led him to opening up Silver Sage Enterprises eight years ago, a consulting business that looks after gravel pit needs for aggregate producers in northern Alberta.

To help look after the needs of a significant number of those pits, Helm hired UAV and mapping and volumes specialist James Donaldson of Skyridge Solutions. Donaldson’s Edmonton-based company currently looks after the volumes and mapping needs of 30 pits for Silver Sage.

“Anyone can fly a drone, it’s what you can do with the data that’s important,” says Donaldson, who flies using a senseFly eBee RTK fixed wing drone equipped with a Geneq G10 GPS Base Station. “When we started the company we looked at a fixed wing drone versus a quad copter and decided on the fixed wing because it can cover more ground in a single flight. Gravel sites are usually very large and this makes us more efficient. Fixed wings also perform and deliver better results if it’s windy; and ours have the built-in RTK system so we eliminate the need to put down ground control points.”

Donaldson uses a handheld GPS unit to tag the piles with product info, such as topsoil, subsoil, overburden and product, for example.

“This is pretty important for the reclamation and monitoring of the site,” he explains. “I walk around with a submeter GPS, identify the material and add it all to the maps. Anyone can tell you how much is in the piles these days, but operators need to know what’s in the piles, too.”

Donaldson uses the data he collects to produce annual operating reports for each pit. The operating reports he provides save Helm a great deal of time – and his clients money – because he no longer has to walk entire pits and GPS every pile.

“It takes quite a bit of time to walk a whole active operating area; it is going to cost me a 12-hour day, and then I have to download that data and then I have to process it,” Helm explains. “Now I can get an operating plan done each year and all I have to do is spend my time on expanding on whatever James flies and finds out. If I’ve got issues, I’ll spot them with his data instead of me taking all that time to walk in there. Now I know where I need to go when I’m working in a pit.”

Reclamations
Silver Sage also plans on using the data it receives from the service provided by Skyridge Solutions for renewals of the conservation reclamation business plans (CRBP). These plans contain all the information on a pit including all the maps and cross-sections as well as any First Nation consultations. Helm says the data he obtains is a big help for working with his clients on continuous reclamation planning.

“Now my topsoil piles and subsoil piles can be identified,” he says. “If I can do this, then on Skyridge’s operating plans that James flies every year, it’s going to show the progressive reclamation [of a pit].”

The UAVs can also be used to identify bad sections within the reclamation that might require transplant islands, where producers can bring in some fresh topsoil with healthy seeds it so it will sprout up again.

Role of LiDAR
The role that LiDAR will play when combined with UAV technologies for managing pits has yet to be defined in Alberta.

“Our problem here is that there hasn’t been any standards or procedures to it, so there’s no defined way of reading it yet; as they know it,” Helm explains.

Helm would like to be able to combine LiDAR with drone technologies so he can cover heavily treed areas.

“The drone is great for all my open pits, and it’s great for my active excavation, but it can’t help me at all yet [for tree-covered areas],” Helm says. “I say ‘yet’ because you know [industry] is going to come up with something.”

Producers and consultants aren’t the only ones interested in using LiDAR technology on UAVs. The combination could also significantly improve provincial governments’ abilities to manage their pits.

Although the government would not be able to use UAVs to manage volumes being taken out of pits that are already active, it could oversee the volumes in a new pit, Helm says.

“But this will only work when the data is there,” he explains. “Right now, if a pit is totally treed they’re not going to get it. But once the technology catches up where they can get an accurate LiDAR reading of a pit, you bet that’s something they’re going to be using.”

Challenges ahead
Helm says educating individuals and companies on the benefits of the drones has been one the challenges he’s encountered since introducing the technology to his consulting business.

That said, as long his consulting business and its implementation of UAVs are helping producers stay in the black, then he expects Silver Sage and Skyridge Solutions to continue to prosper.