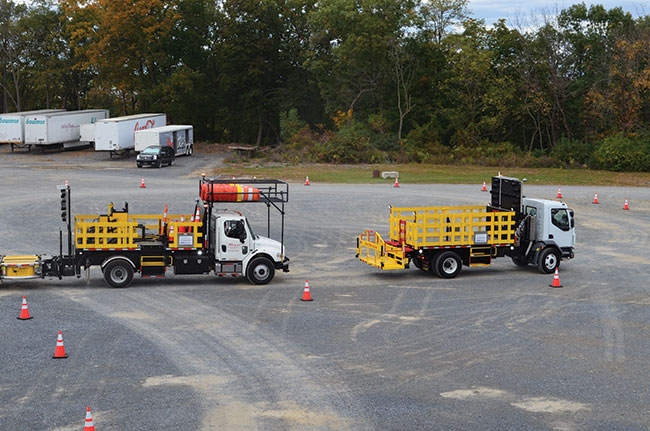 A leader and follower vehicle with a truck-mounted attenuator.

July 27, 2017 – It was over in seconds. An 18-wheeler travelling at a high rate of speed slammed into a crash truck with a mounted impact attenuator at a road construction project in Louisiana. The driver of the crash truck was badly injured and needed medical attention. An air ambulance was called and road workers watched as the injured man was airlifted to hospital.

Road construction crews, the ones you see inspecting a bridge, blacktopping a road or painting lines, and those who drive the crash trucks, are always in harm’s way. Crash truck drivers are the first line of defence between a moving vehicle and workers on the road. Despite safety measures, they’re at risk every day as they perform repairs on our roadways.

Help could soon be on the way, though, in the form of an Autonomous Truck-Mounted Attenuator, or ATMA, an electro-mechanical and sensor system that can be installed on a crash truck, allowing it to be completely unmanned and able to follow a lead vehicle into position. The ATMA system adds an extra layer of safety for road construction crews.

Kratos Defense and Security Solutions has leveraged its autonomous military vehicle technology and married it to a truck-mounted attenuator to create the world’s first automated crash vehicle.

The ATMA vehicle is an automated version of the standard human-driven truck mobile crash barrier. A leader vehicle with a driver can be moved into position while the navigation system transmits velocity, heading and position information in packets of data known as “eCrumbs” to the driverless follower vehicle over a dedicated radio link. The transmitted eCrumbs allow the follower vehicle to mimic the leader’s vehicle. The space between the leader and follower vehicle can be adjusted, depending on vehicle speed and function.

“The whole purpose of automating a vehicle is to take the human out of an unfit situation,” says Maynard Factor, director of business development at Micro Systems Inc., a wholly owned subsidiary of U.S.-based Kratos. “We took what we developed for the military and leveraged it into the construction market space. This takes the person out of the dangerous situation.”

The idea occurred when Factor was at a trade show event in Florida, demonstrating a vehicle automation retrofit product known as the Multi-Platform Applique Kit, or M-PAK, that was a system originally developed by the company for military convoy vehicles.

“I got talking to one of the guys from the state’s department of transportation and he said, ‘Man, this would be kind of cool for automating one of these crash attenuator vehicles.’ I had no idea what that was but I did some research and the concept was there,” Factor says. “We had developed the capability and were looking at some things the military wanted to do with automated convoys so it really fit pretty seamlessly into road construction vehicles.”

The M-PAK is essentially a retrofit kit that can be installed in any ground vehicle, allowing it to be operated remotely via controls or pre-programmed waypoint navigation.

The system includes a vehicle control module, actuators for controlling steering, braking and acceleration, a transmission controller, a radio transceiver, and a navigation module.

GPS position data is transmitted from the leader to the follower vehicle, which can use the data to follow the exact path and speed of the leader vehicle at each point along a route.

“The follower knows at each GPS location what speed, direction and heading and all that kind of stuff it needs to be doing,” Factor explains. “The following vehicle then mimics the exact operation of the leader vehicle.”

Kratos has partnered with Royal Truck and Equipment of Coopersburg, Penn. to produce prototypes.

“I reached out, I called them and they said, ‘That’s the greatest idea we’ve ever heard. Yes, we’re on board,’” says Factor. “They gave me a truck and they automated it for demonstration purposes and we’ve been moving forward ever since.”

A leader and follower vehicle with a truck-mounted attenuator.

Royal Truck is currently promoting the ATMA product. The company was chosen as a partner because its trucks have an enormous amount of technology related to cone distribution and retrieval, radar systems, camera and video recording systems, and high-tech crash attenuators, all revolving around workzone safety.

Regulations encompassing the notion of driverless crash trucks haven’t been developed in many countries so Kratos and Royal are working to educate transportation officials and help them develop legislation and rules regarding unmanned construction vehicles on roadways.

Kratos and Royal are working with the construction industry and the agencies that monitor the operation of truck-mounted attenuators and are also lobbying officials in transportation departments in the U.S., Canada and U.K., which are tasked with developing rules around unmanned vehicles. Meanwhile, they are also working with insurance companies to help them understand the liabilities of using unmanned vehicles.

Regulations are more relaxed in the U.K. and Europe, Factor says, but are still a challenge in North America, and the company is working through the systems and rules.

Kratos and Royal Truck, meanwhile, are also working with the construction industry, the people who build the roads and the agencies that monitor the operation of truck-mounted attenuators.

ATMAs will soon be deployed on sites in a U.S. state and Kratos and Royal Truck are teaming up with Colas, a large construction company in the U.K., which is eager to test the technology. Kratos and Royal truck will work with Colas engineers to install the new technology and the data collected will be analyzed and incorporated into the rollout of future vehicles.

Colas associate director Dennis Gregg says the company is always looking for new and innovative ways to improve the safety of both road construction crews and the road-using public.

Factor was not willing to disclose the exact cost of the system, but noted that it can be installed on existing trucks so companies don’t have to buy new vehicles. He envisions a world of automated road construction vehicles and support equipment from crash trucks to road painting vehicles, water trucks, grinders, traffic cone distribution and pickup vehicles and asphalt rollers.

“If you take a step back and think about it this is really the way to move forward with this crash attenuator vehicle,” he says. “Nobody needs to drive it onto a site. You’re eliminating a human from a very dangerous situation.”