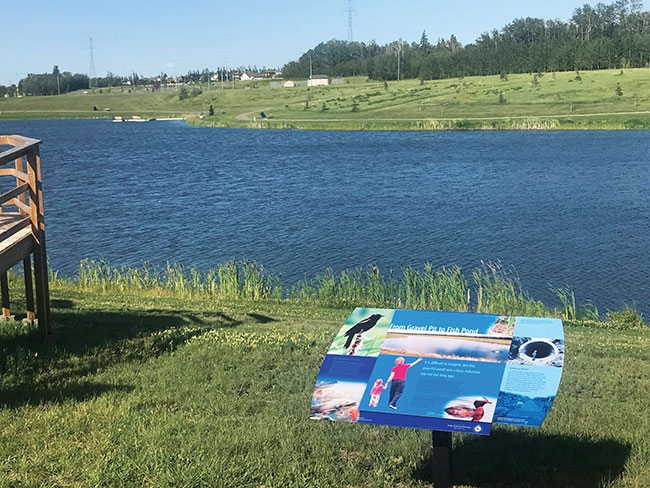 Land reclamation is of great importance to sand and gravel producers in Alberta, and from smaller operators to larger ones, all of them realize the value of being good stewards to the environment in which they operate. The Alberta Sand & Gravel Association’s (ASGA) very roots go back to ensuring that players in the aggregate industry in Alberta go about their work in an ecologically responsible way; which ensures that land is reclaimed to a state which makes it usable once more.

Today, many landmarks in Alberta reside on reclaimed land from former sand and gravel pits, such as Rundle Park in Edmonton or Carburn Park in Calgary. Like in many other provinces, Alberta’s aggregate industry is one of the most highly regulated ones in the country. Companies that mine aggregates must adhere to multiple environmental laws and regulations, which as of 2018 stands at more than 20 municipal, provincial and federal Acts, Policies and Regulations which govern aggregate extraction.

However, currently it seems that for those within the aggregate industry the question getting asked more often surrounds industry regulation and the perceived speed at which it is implemented. Specifically, how much more can those within the industry, especially the smaller operators, bear when it comes to managing costs to run a profitable business?

Some operators are worried about the potential in increased costs in security reclamation on pubic pits.  Full cost land reclamation security has been the norm for private pits in Alberta for a long time, but not so for public pits.

Brock Helm serves as both an ASGA director and as a land and aggregate manager for Mixcor Aggregates Inc. based in Leduc, Alta. Helm sees that there are both pros and cons to going to a full cost security model for public lands, but stresses that it all comes down to those in the industry wanting consistency.

“It really goes back to the Auditor General’s report. The report clearly indicated that the government needs to collect more security so that the public is not left to foot the cost,” Helm said. “A homogenous system of how pits are regulated is a good thing, and that includes full cost security. I am a big fan of permitting consistency and this is a good thing for ASGA and the Alberta government as well.”

This report again stressed that AEP should improve its systems processes for inspecting aggregate holdings on public land so that it can enforce reclamation requirements. The report heavily stressed risks associated with orphaned un-reclaimed sites and recommended that the security deposit amount be seriously looked at to see if it was sufficient. According to AEP, Alberta Environment identified around 63,000 acres of land that had not been satisfactorily reclaimed between 2009 and 2013.

Much like sand and gravel operations in Canada in general, land reclamation was barely on the radar out west 60 years ago. In Alberta, it was not until 1963 that the Surface Reclamation Act was introduced and although this Act did not impact gravel pit activity directly, it did pave the way for the 1973 Land Surface Conservation and Reclamation Act, which designated that surface disturbances would require conservation approvals; including reclamation plans.

However, it was not until 1978 when the Act was amended – this spelled out which types of conservation and reclamation standards were enforceable. In 1979, the Regulated Sand, Gravel, Clay and Marl Surface Operations Regulation took effect. This is really when mandatory reclamation, including security reclamation costs for pits on private lands, began.

What is now known as “full cost” security for private land pits did not come about until 1993 with the introduction of the Environmental Protection and Enchantment Act. Operators must post security – be it in cash or in performance bond form – as a guarantee that the land will be reclaimed to an acceptable level. This has been the norm for a long time and is an accepted practice among private operators.

Public lands are different, however, and are exempt from full cost security in Alberta and fall under the Public Lands Act, meaning security costs are different. They average around $1,000 per acre which works out to about 15 per cent compared to full cost.

There are many in the business who say that not having full security on public lands contributes greatly to orphaned and abandoned pits not being reclaimed properly. Although operators on public lands have been required to submit full conservation business plans for a long time now, one of the main issues is that in the past there never really was a strong plan in place for reclaiming dormant or orphaned public pits.

The official ASGA position on the matter of full cost security for public pits as reiterated by ASGA executive director John Ashton is that this is not something which can be implanted in a sudden manner.

“The industry needs a lot of warning about full cost for public lands,” he said. “This is not something you can do quickly without harming our members.”

Smaller businesses with Surface Material Leases (SMLs) on public lands will no doubt be directly impacted by any new reclamation cost requirements. ASGA Board of Director member Eddy Nash of Nash Enterprises in Slave Lake, Alta., is very concerned that going to a full cost model could literally put him out of business.

“What it does is it starts shutting down the small operators. I’ve got about 15 different SMLs, but if I suddenly had to, even slowly come up with the cash, I would have to give up my SMLs,” Nash said.  “A larger operator is in the position to absorb these costs, but I might have to sell these things. The status quo is bad enough, but if we can live with it because that was the rule sure, but now for them to potentially suddenly throw this at us, I can’t really see any advantages. I might be faced to force to go out of business.”

Helm also feels there are some obvious negatives in going to a full cost model in a sudden way and he shares Nash’s feelings that it could put smaller operators out of business.

“Its going to be sticker shock on how a lot of these guys are going to have to operate if there is a sudden full cost security for public lands,” Helm said. “You could see a large abandonment of leases and smaller operators will simply up and quit. I think it is a huge risk to government of going full costs suddenly. I think the key is communication to those in industry from government officials so that they are not blindsided by sudden changes. We need to be at the table.”

Whatever action the government takes on the matter, one thing is clear, there will no doubt be consequences, even if unintended, to smaller sand and gravel operators in the province if a full cost model is implemented to public pit operators. Both Helm and Nash point out this fact and agree that what really needs to happen right now is clear and open information on what could potentially be coming down the pipeline in terms of regulations.

For more information about the Alberta Sand & Gravel Association, visit www.asga.ab.ca or follow ASGA on Twitter at @AB_Sand_Gravel.

Anthony Murdoch is the communications and events coordinator for ASGA.

Register now for ASGA’s 2019 AGM
Registration for ASGA’s 2019 AGM and Conference is now open. The conference is a great way to network and interact with association members, the board of directors, office staff, committee members, trade show exhibitors and key stakeholders within the sand and gravel industry. Watch for program details coming soon.

The AGM will be held at the River Cree Resort & Casino on January 9 and 10, 2019. ASGA would like to extend an invitation to all of those in the aggregate industry to join them for the two-day program that will include updates on government and policy, industry technology updates, environmental and safety issues, and association business.