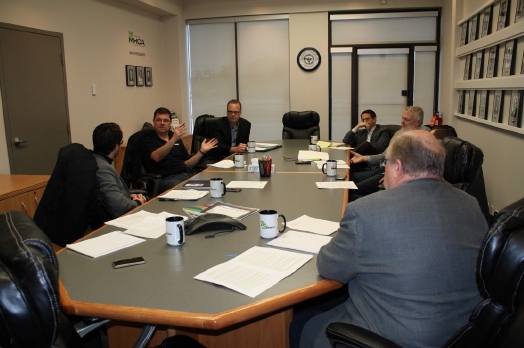 December 17, 2017 – A number of proposed initiatives in Manitoba’s proposed Climate and Green Plan would have considerable impact on the cost and manner in which the heavy construction industry now does business, Manitoba Heavy Construction Association (MHCA) members told officials with the Sustainable Development department this week.

“The heavy construction industry recognizes its role and responsibility in reducing the carbon footprint of the province, in the move to cut greenhouse gas emissions,” MHCA president Chris Lorenc said.

But the Green Plan talks about some initiatives that are not easily adopted, at least not in all locations of the province.

“We want the government to understand that a number of proposals they’ve put on the table will carry significant cost, and some of them are not practical as yet, given the nature of some of the locations and climate our industry is working in.”

The MHCA has refined its discussion paper on the proposed carbon tax, which is to be applied at the pump in 2018, and other possible elements to the Green Plan.

A number of initiatives proposed in the Green Plan have significant implications, reaching beyond routine operating costs.
The initiatives that, if adopted, would directly affect the heavy construction industry are:

• Raising the price per litre for diesel, at the pump, by 6.7 cents immediately, through to and including in 2022, when it will be reviewed for adjustment;

• Carbon taxes on natural gas and on gasoline will have implications in various operations of the industry companies, as well;

• Raising the provincial biodiesel mandate to 5%, from the current 2%;

• Complying with a new national clean fuel standard, to be set by Ottawa, that would involve advancing clean fuels over and above the biofuel mandates;

• Integrating the impacts of climate change into the full life-cycle of infrastructure, including design, planning and management; and

• Sustained dedication of new funding for green infrastructure project priorities, to enhance the resilience of infrastructure against climate change pressures.

The MHCA presented a number of possible initiatives the province could bring, to assist in reducing the industry’s GHG emissions and to help the industry adjust to the measures that may come, especially in regards to the recycling of revenues raised by the carbon tax.

• Phasing in any mandate/procurement policy for industry adoption of new engine technologies to ensure proven performance of industry vehicles and machines; performance reliability in remote and colder climate zones is especially important;

• Capital cost allowance must be addressed within federal tax regime;

• increasing the rate of depreciation is a reasonable response to the expectations of industry, specifically for small businesses, when imposing additional risk on operators, especially those who are ‘early adopters’ of new technology;

• The federal government has set precedent in accelerating depreciation of new, greener technologies and equipment as an incentive to adoption by other industry categories. It is reasonable to apply similar treatment to Tier 4 Final technology for heavy construction industry companies.

The MHCA discussion paper also speaks to the need to improve procurement policies and practices – such as larger packaging of construction projects, to reduce expense/disruption of mobilization and demobilization at work sites – and to the design of transportation infrastructure to reduce traffic jams or idling of vehicles at intersections.

Importantly, medium- and high-quality aggregate resources must be against sterilization in the face of pressure from other land-use developments. The proximity of pits and quarries in the Capital Region has resulted in considerable savings to greenhouse gas emissions and in costs of infrastructure projects – the bulk of which happen in and around Winnipeg – over the years.

Lorenc said the MHCA will now engage with relevant government ministers and senior political officials to ensure the industry has good input on the plan, including consideration of specific programs and initiatives that make meaningful reductions to the GHC emissions while protecting industry competitiveness and the economy.