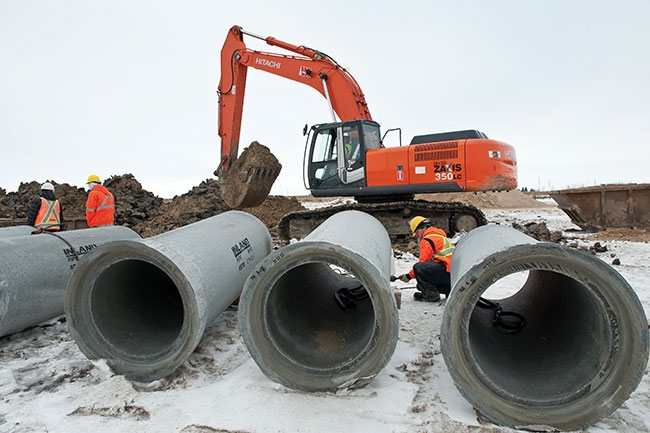 The Manitoba Heavy Construction Association (MHCA) has been a strong advocate for the construction industry for three quarters of a century, and not just in Manitoba.

When the MHCA was founded in 1943 out of the Prairie Roadbuilders Association, members of industry across Western Canada had some big plans on their minds to grow the industry throughout the region and improve stability. Several key members believed the MHCA should champion a national highway program to help better connect Canadians across the country. By the 1950s, the association made a renewed push for that program; and by 1962 the association’s advocacy efforts came full circle with the opening of the Trans-Canada Highway – partially constructed by its own
members.

“A country cannot trade together if it is not connected together,” says MHCA president Chris Lorenc during an interview at the association’s office in Winnipeg. Lorenc’s knowledge of the association’s work and history is arguably as good as anyone’s within the MHCA. He has been the president of the MHCA for 27 years.

“I’m a very lucky person. I get up every morning and can’t wait to get to work,” he says. “The scope of our work is so broad.”

Having an earned ‘presence, profile and impact’ reputation as the recognized voice of and for the heavy construction industry in Manitoba, the MHCA continues to advocate for sustained investment in core infrastructure, and seamless, multi-modal transportation systems.

The MHCA works with other associations across Canada to tackle topics that go beyond its provincial borders. Helping create the blueprint for Canada’s national highway program isn’t the only way the country, as a whole, has benefitted from the hard work of the MHCA. One of the proudest achievements of the MHCA, in Lorenc’s opinion, was helping people understand the importance of the terms “infrastructure” and “infrastructure deficit,” from industry stakeholders at the federal, provincial and municipal levels to the general public. He says many important policies have been built around these terms since their inception – like strategic investment in infrastructure, for example.

By promoting the importance of strategic infrastructure investment, all levels of government, the construction industry and the general public have a better understanding of the term.

“People now better understand why infrastructure is important, better than anyone in the last 25 years,” Lorenc says.

Always looking ahead
The MHCA sets itself apart by focusing on the big picture and changing with the times. One example of this progression as an association – in a male dominated industry – was the naming of MHCA’s first female Chair, Colleen Munro, back in 1995-96. Munro was the first woman to be named chair of a heavy construction association in Canada.

The MHCA is also very active when it comes to promoting safe-work practices and procedures within the industry. The industry and association run and support the WORKSAFELY education and training program. In the 30 years of its operation, trend lines continue to show a significant reduction in the frequency, duration and severity of injuries, making the industry vastly safer and more attractive.

“We are very focused on the big picture, I think that’s what sets us apart,” Lorenc says.

Canada’s construction industry has certainly noticed and acknowledged the MHCA’s efforts and accomplishments over the years. The MHCA has been recognized for its advocacy efforts on more than one occasion. During the 2011 CCA Annual Convention, for example, the MHCA was presented the 2010 CCA Member Association Award of Excellence “for demonstrating outstanding leadership and excellence in achievements;” as well as the CCA International Business Award, “which recognizes the outstanding activities, programs or accomplishments of a Canadian-based business or association active in the construction industry in the area of international business or trade.”

The legacy that the association has built over the past 75 years is one that Lorenc is very proud to be part of.

“We punch way above our weight… we have added value to the development of public policy, and that’s something we’re very proud of,” he says. “When you can say that legitimately, it’s a heck of a feeling. It is a huge source of personal satisfaction and personal pride. I’ve never regretted leaving the law practice to join the MHCA. Since starting in 1991, it has been incredible to have worked with every Manitoba premier, provincial ministers, Winnipeg mayors, municipal leaders, successive federal ministers. I’ve had the privilege of serving 13 MHCA Chairs and working with every board since starting. I have learned from each Chair and every board member.  The MHCA is a great organization supported by a great team in its staff.  It’s been wonderful.”