News
Crushing it in cottage country 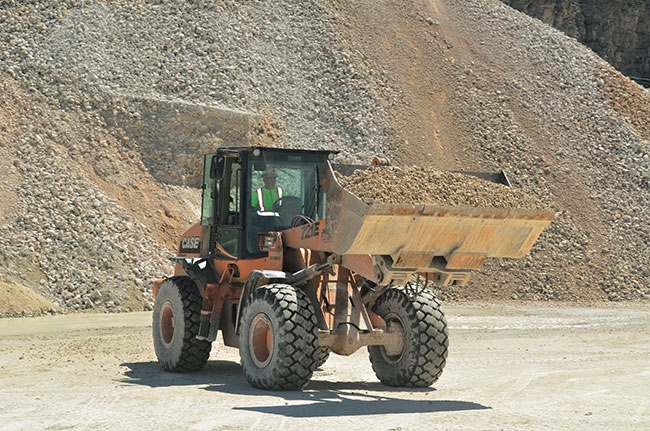 Darren Neil has built and grown Darren Neil and Sons Excavating Inc. from the ground up in the heart of Ontario’s cottage country. Born and raised in Collingwood, Ont., Darren identified several opportunities in his hometown where a person with a strong entrepreneurial spirit could build a business doing niche work within the construction sector. In 2003, he did exactly that.

“I went out and mortgaged my soul and got a skid steer and a mini excavator,” he says while laughing over lunch at a pub in downtown Collingwood. “My first jobs were in landscaping, trenching, grading, that sort of stuff.”

Over the past 15 years people have recognized the quality of his work and his business has grown substantially, expanding into several other sectors of the industry. And as the business has grown, so has its staff. The company currently employs 38 people; including his mother working in the office and two of his sons working alongside him in the field, making the company a true family affair.

“We do excavating, trucking, crushing, snow removal, grading and property maintenance,” Darren says. “We have about 24 trucks on the roads right now… we also do a fair amount of concrete demolition in Collingwood, Wasaga Beach, Stayner and the Elmvale area – old barn foundations, commercial buildings.”

Compact crushing
Currently one of the main focuses of Darren’s business is custom crushing.

“We really got into crushing and screening over the last two years,” he says.

Darren’s company offers its services across Ontario going as far north as the Muskoka Region. When he started up his custom crushing operation, Darren wanted to ensure he had some of the latest equipment available that was also easy to transport and offered a quick setup time. He ended up opting for McCloskey International’s new I34R impact crusher – the first to be delivered to a customer outside of Ireland. The compact unit is only eight feet, five inches wide and weighs approximately 30 metric tons, so it requires no specialized weight permits for transport.

“It’s a one-piece setup, you’re up and running in 10 minutes,” Darren says. “The high mobility is important for us being able to handle small to large jobs. It helps us fill a niche for smaller jobs but has also been efficient for handling larger jobs.”

To say Darren is familiar with McCloskey’s line of products would be a serious understatement. In addition to his new I34R, his crushing fleet is comprised of an I44 v3 impact crusher, an R155 screener, an S130 screener, four ST80 wheeled stackers, and an old 412 portable trommel screen he bought back in 2007, which is when Darren first developed his business relationship with the Keene, Ont.-based manufacturer.

“I’m a big one to buy local,” he says. “It’s keeping our local people employed, which is huge.”

The crushing fleet produces a wide variety of new products as well as recycled concrete and asphalt products.

“The crushing fleet is happy doing recycled products at 1/2”, 3/4”, 2”, 4” or doing sand and gravel or limestone at any size requested,” Darren says.

The compact size of the I34R has also won over some of Darren’s clients, after they got over its small footprint. He says some clients have laughed when they first saw its small size but quickly changed their tune when they saw it producing efficiently.

“People are also happy to see that it isn’t tying up their space,” he adds. “It’s definitely outperforming people’s expectations.”

Future plans
As demand for local aggregate products grows, Darren plans to expand his crushing and screening operations. He sees increased opportunity coming in the future and has purchased a pit in the area, but adds that finding more qualified staff for his crushing operation will be challenging.

“The hardest thing in the world is to find people,” he says. “Some days you’re swinging a sledgehammer all day, doing repairs, sometimes you’re running a loader all day. Every day has its challenges in the crushing business.”

That said, Darren sees a bright future ahead for his company, one that will continue to create employment opportunities for his sons and other people residing in the Collingwood area.