A new player emerges in the aggregates industry 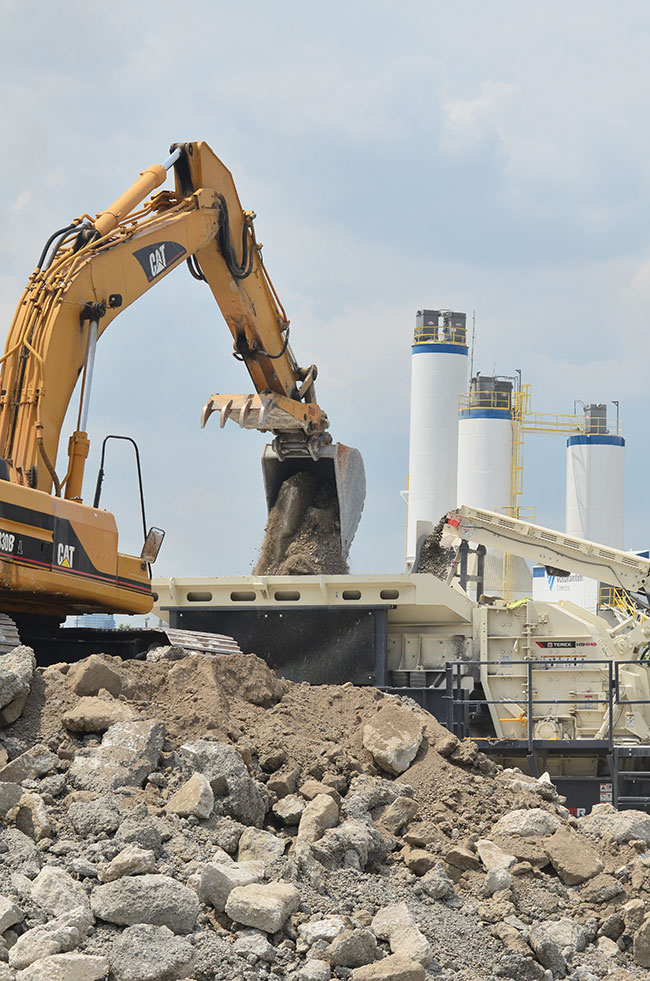 There’s a new crusher on the block, and it’s looking to meet the recycling and crushing needs of southern Ontario’s aggregates producers.

Recon Aggregates is into its fourth year actively crushing in the Greater Toronto Area (GTA), tackling a variety of small jobs for companies with its two-plant operation. Three partner groups that had supporting lateral markets, including aggregates and landscaping companies, originally started up the company to produce their own materials.

“We always purchased crushed material, so why don’t we do it ourselves, we said,” says John DiVizio, general manager at Recon Aggregates.

But not long after starting up the business, the three partners found there were other local crushing opportunities waiting to be had.

“Our niche is that we’re the little guys, and we’ll do the little jobs. The jobs the bigger guys don’t want to take on, we found a niche,” DiVizio, says. “Right now we’re focused on RAP (recycled asphalt pavement) and concrete.”

Buying local
When the company first started up, it had purchased a brand of Austrian crusher that was a relative unknown in North America. The three partners at Recon quickly found that purchasing parts for the crusher and having them arrive in a timely manner was a frustrating and costly venture.

“The original unit just wasn’t the right fit in terms of sales and support,” DiVizio explains.

So the company went shopping around and checked out a variety of crushers available in the market that would be well suited for their applications. They ended up opting to work with Oshawa, Ont.-based Powerscreen of Canada, first purchasing a Powerscreen Trakpactor 320SR in 2016, and then more recently, adding the first ever Terex Cedarapids CRH1111R Portable Closed Circuit Cone/Screen Plant to come to the Canadian marketplace.

“We crush mainly two sizes in each material: 5/8” and 1/2”,” DiVizio explains. “Part of the sell on the Terex was the ability to changeover screens in a relatively quick fashion. In a matter of a few hours, I can start dropping material on the ground.”

The CRH1111R features a TI4143 impact crusher and a 5×16 two-deck inclined screen. The crusher is hydraulic clutch driven and powered by a 350-hp Scania diesel engine. All of the unit’s other components are electrically driven from a 150kW generator.

DiVizio has produced recycled materials crushing RAP and concrete with his company’s new CRH1111R, and he’s happy with the results to date.

“We put through both materials and it seems to be handling it fairly well, so we’re quite content with the product so far,” he says.

The original unit was a smaller track plant that allowed the company to be nimble and flexible for handling niche jobs quickly. Now that they have the new CRH1111R as well, they can handle larger jobs and produce higher tonnages per day.

John DiVizio, general manager for Recon Aggregates, has produced recycled materials crushing RAP and concrete with his company’s new CRH1111R, and he’s happy with the results to date. Submitted photo.

“Now we’ve got the best of both worlds,” DiVizio says, adding that part of the reason they opted to go with a Terex Cedarapids unit was the existing relationship they had built with Powerscreen of Canada. “It’s the aftersales service we were looking for… they’re locally based in Oshawa. Something goes down, we can react and get back up and running fairly quickly.”

After Recon’s experience with its first crusher, the partners made sure the suppliers they chose for the business would have the quick service they required. The company works with Toromont CAT for supplying its loaders and excavators, and finds them to be a reliable a partner, like Powerscreen.

DiVizio sees his company continuing to grow in the future. He says he hopes to see Recon Aggregates expand north of the GTA into the Barrie area, south to the Great Lakes, east to the Peterborough area, and west to the Collingwood area, and get some crushing work in the quarries throughout those regions. That type of expansion will require additional crushing and screening plants, and DiVizio says he wouldn’t be surprised if they opted to work with Powerscreen again.

“Powerscreen of Canada has been a vital partner to our growth and success,” he says.