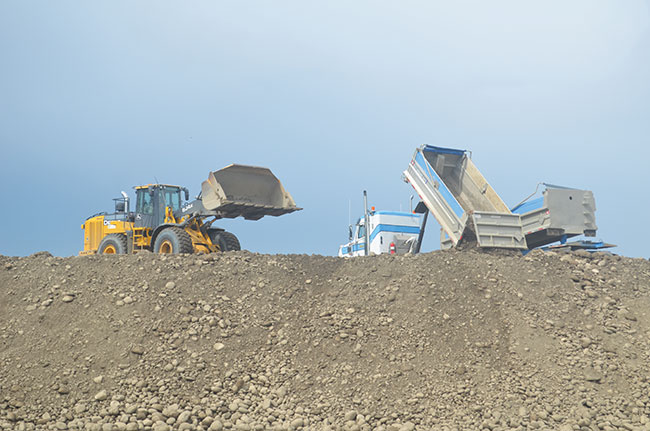 In 1964, at 19 years of age, Merv Pidherney got a co-signed loan with the help of his parents and traded in his 1957 Chevrolet Bel Aire to start up his first business hauling gravel in his new single-axle truck. Merv says that when he started, he earned $5.40 per hour.

“It started out as a trucking firm, but couldn’t make it work in the winter in just that game,” he recalls.

To keep his business strong, Merv expanded his services over time and kept his business as diverse as he could, including trying his hand at aggregates crushing in the early 1980’s at one point. More than half a century later, Pidherney’s has grown by leaps and bounds, employing around 650 people during its peak season. The family-owned company considers itself a one-stop shop for handling oilfield, civil and hauling projects.

“We exploded in the ‘90s,” Merv recalls. “Luckily we had enough good people around that we could do anything.”

Always expanding
Pidherney’s has an impressive fleet of equipment that includes more than 100 gravel and lowbed trucks, as well as a variety of excavators, scrapers, dozers, loaders, rock trucks, packers, crushers, screens, hydro-vac trucks and more.

These days, in addition overseeing oilfield, civil and hauling projects, Pidherney’s also produces its own aggregates at its Rocky Mountain House and Fox Creek sand and gravel pits.

“We do some custom crushing, but 90 per cent of it is for Pidherney’s,” explains Art Murphy, crushing supervisor for Pidherney’s, adding that most of the aggregates are used for a variety of applications including roadbuilding projects, oilfield sites, ready mix plants, and water and sewer civil works projects. “We’ve got all we need.”

From year to year, the company crushes anywhere from 250,000 to 500,000 tonnes of aggregates annually to meet its internal needs.

“We’re going to try and grow it a little more next year,” Merv says, adding that he plans on purchasing another cone crusher to enhance his operations. “I’d like to do better, learn how to crush more.”

Pidherney’s already invested in improving his aggregates operations in 2019, with the purchase of a brand-new Haver & Boecker Tyler 1100 F-Class Portable Plant.

“We’re happy with it. My guy is happy with it, and that’s key,” Merv says. “I had looked at others and they just didn’t meet the needs I had. I wanted a trouble-free one, and I think I got that.”

The Tyler 1100 F-Class Portable Plant is designed to maneuver easily between different areas of mines and quarries. It has an advanced double eccentric shaft design and four-bearing technology to maintain consistent performance under surge loads, preventing material contamination.

Other features include an innovative split-bucket system for simplifying maintenance and bearing changes and an optional end-tension bottom deck for easier screen media change-outs; a custom-built chassis that holds the vibrating screen and periphery equipment, such as crushers or conveyers, to customize the plant for each operation; and a hydraulic system that allows for setup in 30 minutes, as it positions the screen at an optimal angle of 18 to 20 degrees.

“It’s a nice working unit. You can tell the people that built it knew what they were doing,” Murphy says. “The company has been around since 1872 and they’re still building screens.”

Murphy says he really likes the design of the decks and the durability of the screen media.

“The polyurethane is really good for taking the impact,” he says. “When you get into the one-inch material, self-cleaning screens are the way to go.”

Merv Pidherney holding his 2019 John Deere Top 10 Signature Customer award for his business in 2018. A big change from when he purchased his first single-axle truck for hauling gravel back in 1964.

From year to year, Pidherney’s crushes anywhere from 250,000 to 500,000 tonnes of aggregates annually to meet its internal needs.

Murphy also likes the convenience of the Ty-Rail quick-tensioning system, which is
designed to cut screen change-out times in half.

“It’s a good system,” he says. “It’s clean, it’s efficient. I get a lot of compliments on it from guys that come in.”

The other feature Murphy likes is that he doesn’t have to change the screen media in the incline position, which can make change-outs much more difficult, especially in the middle deck.

“When it’s in the down position, people can get into the middle deck very easily,” he says. “Normally, when most machines are in an incline, you have to do screen change-outs in the incline position. But with the F-Class, I could probably drop that down in three minutes.”

Challenges ahead
While Merv enjoyed operating out of the Rocky Mountain House area, it did present some challenges since the company needs several hundred people during its busiest times of the year.

“We live in a small, populated town of 7,500 people,” he says. “So we built another office in the Red Deer district to house our engineers.”

A family affair
Merv certainly doesn’t appear to have any challenges when it comes to finding family members from the younger generations to take up the reigns of the business.

“I’m very happy with how everything went,” he says, looking back on 55 years in the business. “I’m getting up in age so I’m trying to slow down. I have three boys, and they’re all with me at the company.”

All three of his sons oversee different aspects of the business, with Clint Pidherney as vice-president, Shane Pidherney managing the costing department, and Troy Pidherney as head of the trucking department. Even six of Merv’s nine grandchildren currently work at the company, paving the way for another generation of Pidherneys to keep the future of the family-run business burning bright.