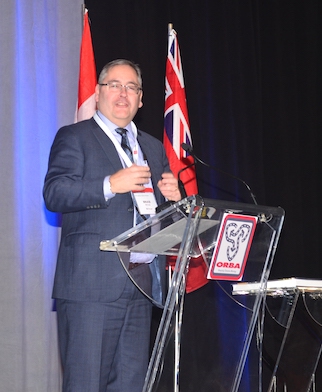 February 2, 2016 – Bruce McCuaig, president and CEO of Metrolinx, offered attendees a look at Metrolinx’s current and future projects during the Ontario Road Builders’ Association’s Transportation Infrastructure Day during its annual conference held on Feb. 1 and 2 at The Fairmont Royal York Hotel in Toronto.

“Despite being an urban region of about six-and-a-half million people, we have a really underdeveloped transportation infrastructure,” he told the crowd. “A huge part of the growth in employment is happening across the region and what we haven’t built is all the east, west, north and south connections.”

Opportunities for Metrolinx and ORBA to work together include projects such as the elimination of many significant level crossings across the Toronto region and RER and grade separations.

McCuaig said that Metrolinx wants to continue to improve partnerships with ORBA in how it is developing everything from contract documents to dispute resolution.

“We want to continue in that context in how we can have more of a partnership as we move forward together,” he told the crowd.