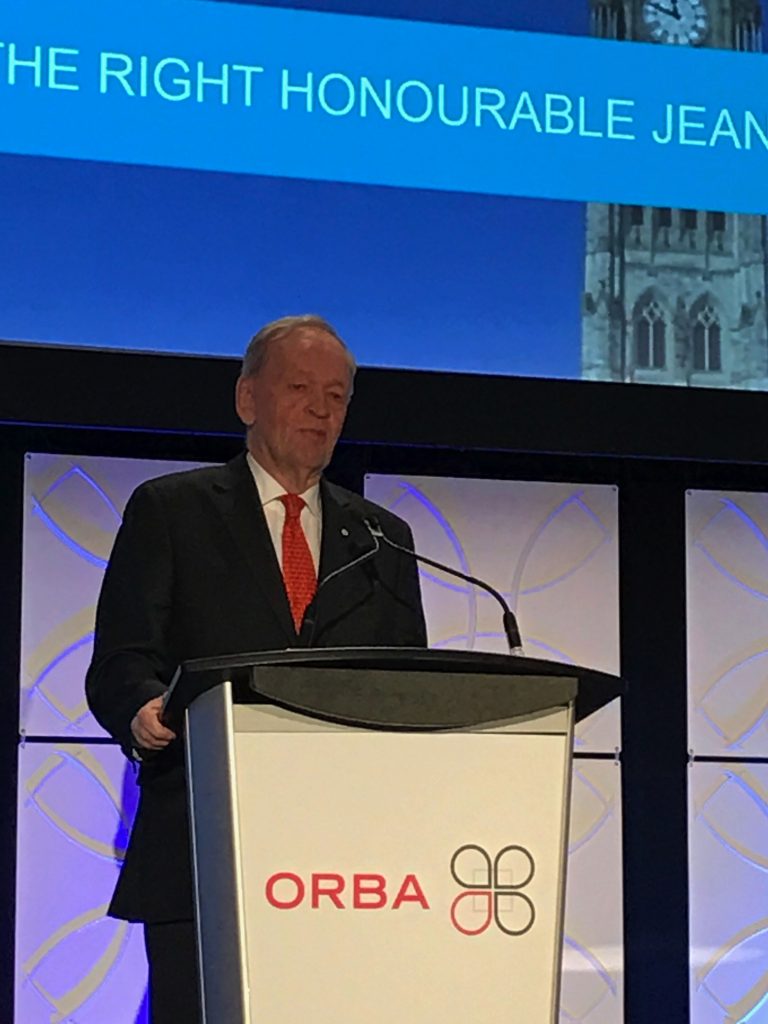 February 6, 2017 – The Fairmont Royal York hotel in downtown Toronto is set to play host to several high-ranking and prominent political figures over the course of the Ontario Road Builders’ Association’s (ORBA) two-day convention on Feb. 6 and 7. None are more prominent than former Prime Minister Jean Chrétien, who was the keynote speaker to kick off ORBA’s milestone event.

“I had the program on infrastructure when I started in 1993,” Chrétien told the crowd. “You know, when I became the Prime Minister that year, we were in quite a bad shape economically. We had a deficit of 6.2% of GDP, 11.5% unemployment and the main plank of my program was the infrastructure program. Some of you will remember that I was laughed at because they said we could not afford it. My opponents, the Tories at that time, had a big ad where you could see workers dumping loonies in holes to show it was irresponsible to have an infrastructure program; and it turned out to be a very positive element in turning around the economy. So much so, that three years after that from 6.2% of deficit we were balancing the books. I don’t think it was all the infrastructure program that did that, but it was part of it.”

Before the most recent federal election, Chrétien wrote to current Prime Minister Justin Trudeau to discuss the importance of infrastructure spending.

“I told him that we had a deficit in Canada – it was an infrastructure deficit, and investing in infrastructure is for the good of the nation, and he listened to that,” Chrétien said.

Chrétien added that one thing that recent governments have done that he doesn’t agree with is paying cash for infrastructure projects instead of paying out of a capital budget over a 30- or 40-year period for projects.

“That limits the possibility of the government to do more when it’s needed,” Chrétien said. “And infrastructure in a country like Canada is essential because we have to build roads. We have quite a large country. It’s where this government is going at this time and I congratulate them.”

Chrétien charmed the crowd with his well-known sense of humour, and discussed whether to not he missed the world politics.

“No, but I miss one thing. I miss question period,” he told the crowd. “For 30 years I was replying to questions in the House of Commons and always felt it was a fantastic institution because the Prime Minister needs to be there three or four times per week and you need to know what’s going on… if you make a mistake, everybody knows it.”

After his speech, Chrétien welcomed the crowd to ask him questions. One of the questions was related to U.S. President Donald Trump’s comments regarding renegotiating the North American Free Trade Agreement (NAFTA).

“It will be bumpy but we will survive,” he said, adding that the biggest potential risk for Canada will be based on how protectionist a stance that the current U.S. administration decides to take. “The problem will be if they become really protectionist – how badly will their own economy be affected… in politics, no one can predict what the situation will be in one, two or three years, but we will find a practical solution; if we are smart.”

Chrétien also answered a question about government involvement related to First Nations consultation and involvement in the development of resources within the Ring of Fire in northern Ontario.

“We cannot bypass them and ignore them,” he told the crowd. “But if you’re reasonable, they tend to be reasonable. That’s been my experience… the government has to be patient and get involved, and involve them.”

Chrétien added that he was happy to be speaking with people that are so involved in the construction of Canada’s infrastructure.

“I’m happy I’m talking with the ones that do this type of work,” he said. “It’s very, very important that we do that, that we are very efficient, and that is adding to the productivity of the nation.”