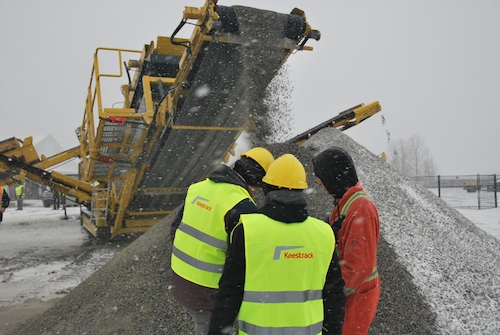 Feb. 6, 2017 – Dozens braved the unusually snowy weather in Chilliwack, B.C., to see the impressive line-up of crushing and screening equipment from Keestrack.

Frontline Machinery hosted Canada’s first Keestrack demonstration at Richie Bros. on Feb. 2. The star of the show was the new Keestrack H4 tracked cone crusher that is able to handle 250 tonnes per hour at maximum feed sizes of 7″. With an optional prescreen with dirt conveyor 4′ by 6′ and three-deck screen 12′ by 5′, the H4 cone crusher combines the functions of three machines in a single pass.

“If you had to run a cone by itself, a scalper by itself and a triple deck screen, all with diesel hydraulics, you’d be burning around 80 litres an hour. Right now with that one machine we’ve cut it down to 30 litres an hour of fuel consumption,” Todd said.

The H4’s standard hybrid engine is another innovative feature that reduces fuel consumption. Electricity is the way of the futures, says Kees Hoogendoorn, owner and founder of Keestrack.

“Hydraulic is not as efficient as electric,” he said. “Like Telsa, it’s much more efficient as a car than fuel-burning petrol or diesel and cleaner for the environment. So are our machines. We believe in the long-term future that’s the way to go.

“There is enough capacity there that you can plug in some stackers, some conveyor belts as well,” Hoogendoorn said.

Running one machine as opposed to three also saves customers on maintenance costs. The H4 is mobile and weighs between 35 and 46 tonnes, which makes it ideal for small and mid-sized crushing jobs, Todd said.

The H4 is also equipped with a camera system on the top of the crusher that allows an operator on ground level to view the cone.

Other machines in action during the demo were the B5 jaw crusher, K3 scalper, R3 impact crusher and C4 classifier spread.

Craig Fiessel, owner of Rock Crusher Concrete and Asphalt Recycling based in Regina, drove with his father, Ervin, to view and bring home Keestrack’s K4 Screen. The new screen will pair with his current R3 Impact Crusher.

“We’ve had a couple situations where there was a lot of extra sand so we want to scalp the sand out of the material so we can separate it before screening, to save our impact ware parts.”

Fiessel runs the company with his brother Clint, and is planning to open a yard in Regina to become a privately owned recycling centre.

“For us our main business plan is being mobile, so we can appear on a site of a demolition job, crush it before it leaves so we’re saving the amount of trucks that are moving it. We stick to smaller quantities and for smaller, niche markets,” Fiessel said.

Laurier Lavigne, owner of Advantage Mobile Recycling Inc., drove with his wife from Edmonton where his company is based to view Keestrack’s lineup. Lavigne, who got into the business less than a year ago after years spent in the oilfield, currently rents crushing equipment from Frontline on a job-by-job basis and says business is steadily picking up.

Keestrack will be displaying its full product range of tracked crushing, classifying and material handling solutions at CONEXPO-CON/AGG 2017 in March.