The paved, two-lane highway is being moved because the Peace River will widen by two to three times 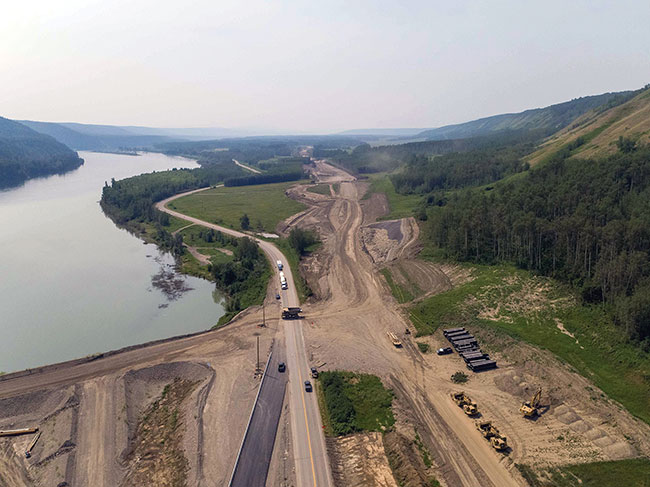 A major realignment of Highway 29 along the Peace River in northeastern British Columbia is in full swing, with construction underway on new roadway and bridge projects at various locations along the route.

A 32-kilometre stretch of the winding thoroughfare, which connects the community of Hudson’s Hope with the Alaska Highway and Fort St. John, is being shifted as part of the Site C hydroelectric dam project.

The paved, two-lane highway is being moved because the Peace River will widen by two to three times and cover parts of the existing thoroughfare when the Site C reservoir begins to fill in 2023. BC Hydro partnered with the Ministry of Transportation and Infrastructure to realign segments and build new bridges.

Construction on the project started in 2018 and is expected to finish in mid-2023, despite challenges posed by COVID-19.

David Conway, community relations manager for the Site C project, says that despite the uncertainty and the effects of COVID-19, the varying realignments on Highway 29 are still moving forward.

“The highway 29 realignment work is progressing,” he says. “For the Cache Creek alignment, the contractor is currently working on the detour bridge, pile testing and various drainage works.”

At Cache Creek East, crews are building a six-kilometre-long highway grade and 596-metre-long bridge across the waterway as well as an embankment on the easternmost portion of the segment.

Construction of the highway grade is ongoing, including the removal of unsuitable material, ditching and hauling and placement of aggregate.

Installation of concrete bridge piers and abutments continues. To install piles for a temporary detour and bridge, the contractor must drill into the bedrock. Steel pile casings are then installed and filled with concrete.

The detour bridge is being installed beside the existing Cache Creek bridge and will be used in the unlikely event that the existing bridge is impacted by a new head pond.

Rip-rap is being hauled from Peaceview Borrow, Portage Mountain and West Pine quarries and placed along the highway alignment.

At Halfway River, a three-kilometre highway realignment continues, and the contractor is now installing a cast-in-place bridge deck and parapets. The bridge is 1,042 metres long.

Crews worked on construction of bridge abutments and installation of steel girders to support the bridge deck, as well as putting in rebar, formwork and concrete. The concrete will be placed in multiple lifts.

A concrete batch plant is being operated at the site and workers are presently hauling and stockpiling materials.

The work for the segment was awarded to Eiffage-Infracon Halfway River Joint Venture.

Grading work on the new highway alignment continues and will include the placement and compaction of aggregate on the highway embankment. Rip-rap will be hauled from Portage Mountain Quarry.

At Farrell Creek, a 1.9-kilometre stretch of the highway is being shifted and construction of a 47-kilometre-long bridge continues.

Concrete bridge pier and bridge abutment foundation construction is underway, including the installation of rebar, formwork and pouring of concrete.

The contractor is currently building the bridge foundations and installing bridge piles by drilling into the bedrock.

Construction of the highway alignment includes removing material, placing geotextile fabric and aggregates. Future activity at the site will include grading and paving and continued construction on the bridge.

East of Farrell Creek, 3.5 kilometres of the highway is being relocated north. The contractor is removing material and placing aggregates. Rip-rap is being hauled from Portage Mountain Quarry.

At Dry Creek, a 1.5-kilometre-long segment of Highway 29 is being realigned and a 158-metre-long bridge is being designed and built. Construction began last year and is expected to finish in 2022.

Construction of the highway grade has started, including the removal of material and hauling and placement of aggregate.

The bridge abutments and piers have been complete, and delivery and installation of steel bridge girders is expected to occur soon.

At the Lynx Creek site, a traffic detour has been completed and will be in place until 2022.

At eight kilometres, it is the longest segment of the highway to be realigned and will take four years to complete, finishing in 2023.

The project includes a new highway and bridge, causeway and embankment. 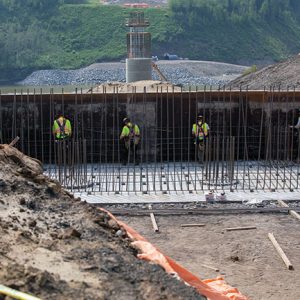 Workers install rebar for the east abutment of the Farrell Creek bridge on Highway 29. Photos courtesy of BC Hydroelectric. 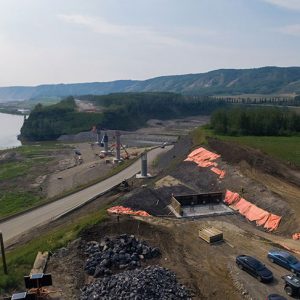 Highway 29 alignment at Farrell Creek in varying stages of construction, showing the abutments at either end with five bridge piers.

Presently, the highway realignment and construction of a 152-metre-long bridge are in progress. Materials are being removed from the site and aggregates are being hauled from Gates Island to support embankment construction. Construction continues on foundations for the bridge piers and abutments.

As part of Site C construction, public road improvements have also been made to sections of 240, 269, 271 and Old Fort roads to enable truck traffic to and from the dam site. The roads are on the north bank of the Peace River in the vicinity of Fort St. John. Much of the work has involved upgrading and paving, shoulder widening, and installation of streetlights at intersections.

Meanwhile, progress continues to be made at the Site C project. When completed, the project will provide 1,100 megawatts of capacity and about 5,100 gigawatt hours of energy each year to the province’s electricity grid.

Both the upstream and downstream cofferdams have been installed across the river and interlocking steel pile walls have been completed.

The latest construction bulletin from the site notes that excavation of the approach channel, drilling and grouting, and underground works on the north and south drainage features are underway, as is placement of core material in the completed core trench and centre sections of the dam.

Roller-compacted concrete placement continues at the dam and core buttress on the south bank.

Components for the turbines and generators are arriving and being installed. Four remaining turbine runners are scheduled to be delivered in early 2022.

Construction of a 2.6-kilometre-long berm to protect the shoreline of Hudson’s Hope is also underway and berm construction continues along the west and east ends of the site.

This article appears in the September/October 2021 issue of Rock to Road. Read the digital edition.