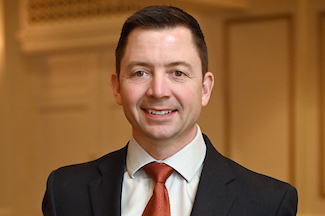 The OAPC is a council of ORBA. Levac, P.Eng, Ing., assistant manager, city and commercial division at R.W. Tomlinson, takes over the helm of the council board from Rick Logozzo, general manager at Coco Paving Inc., who served as OAPC’s Chair from February 4, 2019, through February 3, 2020.

“The OAPC and ORBA have made great inroads in working together with municipal and provincial owner agencies and ministries to achieve or our common goals , which include having quality asphalt pavements that last,” said Levac. “With our council board, the association and our stakeholder partners we will build upon our successes to ensure we continue to uphold our mandate of excellence in asphalt pavements.”

Levac, is a resident of Ottawa and originally from Sturgeon Falls, Ont. He is a licensed professional engineer with a Bachelor of Science in Civil Engineering from the University of Ottawa. Upon graduating from university, he obtained a co-op position with Lafarge Canada Inc. in quality control and was also involved in working with aggregates and concrete. While at Lafarge Canada Inc. he worked in the Gatineau office as a lab manager for two years and later as an estimator for five years before coming back to Ottawa as a construction manager. It was during this time that he became more involved with asphalt plants. In 2009 Coco Paving Inc. bought Lafarge Canada Inc. and Levac worked for Coco Paving Inc. from 2009 to 2013 as the assistant general manager for Ottawa and Gatineau.

Levac first became active in the Council in 2016 when he joined the board of then the Ontario Hot Mix Producers’ Association. It was at that time he also became a member of the OAPC’s Plant and Paving Committee. In addition to his involvement with the OAPC he served on the board of the National Capital Heavy Construction Association (NCHCA), based Ottawa, starting in 2010, and was president of the NCHCA from 2014-2015.

“Ivan has a wide-range of experience in various sectors of the industry and has a significant depth of knowledge,” said Logozzo, “I am confident that with the experience and passion he brings, he will successfully lead the charge for the Council’s continued pursuit of excellence in asphalt pavements.”