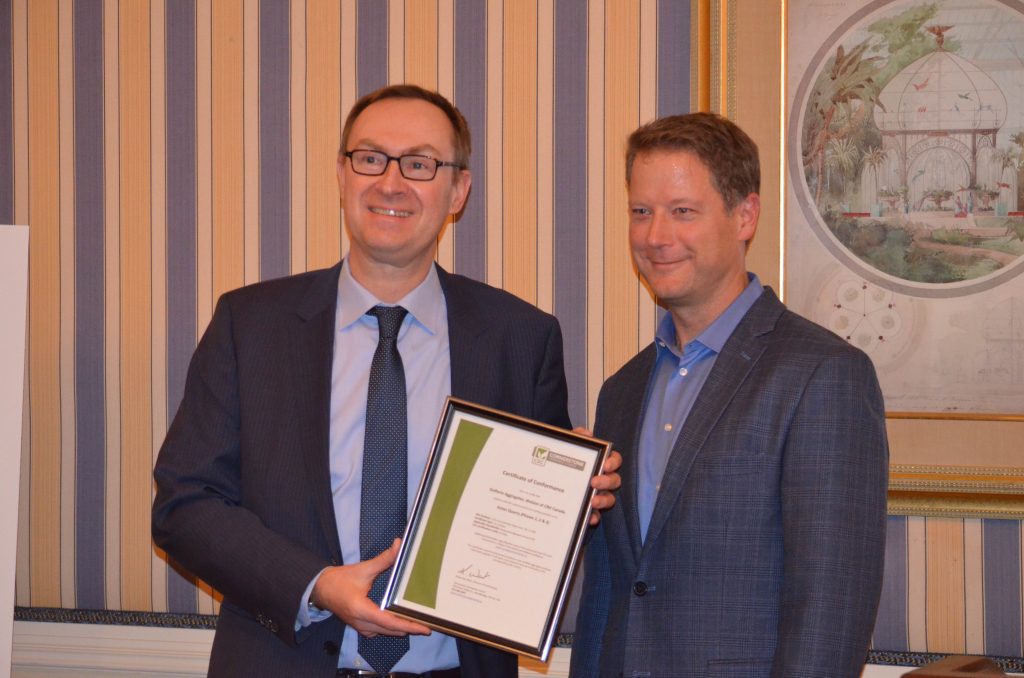 February 23, 2016 – After years of planning and preparation, the Cornerstone Standards Council announced that the Dufferin Acton quarry has become the first to produce aggregates based on CSC standards.

“It’s fantastic. It has been 4-6 years of hard work to get to this point and it has been a tremendous effort by so many industry stakeholders, environmental groups and community organizations,” said Peter Kendall, the former chair of the CSC. “There were certainly lots of points throughout the process where we didn’t think it was going to happen but here we are.”

The official certification was presented to CRH Canada Group President and CEO Baudouin Nizet at an event at the OGRA/ROMA co-conference in Toronto. Dignitaries representing several Ontario communities, as well as NGO’s, the Ontario Trillium Foundation and the CSC attended the event. Premier Kathleen Wynne and Minister of Natural Resources Bill Mauro were also in attendance.

For Nizet and his team, the push towards aggregates certification was a must as the province struggles to open and extend quarries in the wake of increased opposition from community and environmental groups.

“We saw over the years that there was more and more difficulty getting extensions for quarries,” says Nizet. “We thought that by teaming up with some NGOs that were specializing in that field, and get some stakeholders around the table, we would be better suited to identify what were the issues and how we could respond to them in a structured way. That was the idea behind the creation of Cornerstone (CSC).”

Nizet and his team chose the Acton quarry as the suitable place to attempt to establish the certified aggregates, as the quarry is looking towards an extension of its operations. The development of the standards gives the company the social and environmental credibility for continuing its operation.

“At the end of the day, it’s a set of rules and standards which are defining how you can operate a quarry, from cradle to grave in amore sustainable way. It’s all about transparency, communication, environmental standards, noise and the community. It made sense to use a quarry, where you see potential for an extension, for using the certification.”

With Dufferin Acton on board as the first to receive certification, other operations are looking towards following Dufferin’s lead.

“There are quite a number of other sites that are in the process right now, and these guys were the first across the finish line,” says Kendall. “But we are working on quite a few other sites.”

As those quarries are brought on board, the next challenge will be to build a market for certified aggregate resources in Ontario and abroad.

Stay tuned to rocktoroad.com as we continue to provide updates on the initiative to produce certified aggregates in Ontario.