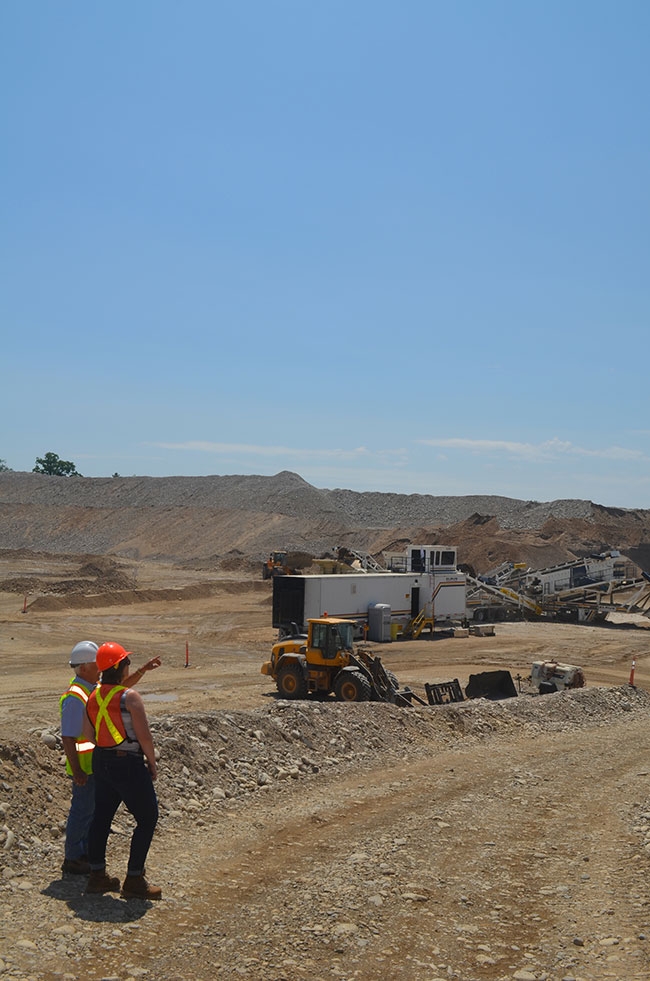 The CSC’s certification system is a tool for assessing a pit or quarry’s conformance with CSC standards and manages the issuance and maintenance of CSC certificates.

September 28, 2017 – For almost as long as Canada’s aggregate industry has been harvesting the country’s natural resources to build much-needed infrastructure and thousands of other products, there have been individuals and groups that are opposed to the process. Aggregates producers, like most companies operating in resource-based industries, have met resistance to their production that has come in the forms of environmental groups, concerned neighbours, and various levels of government, to name a few.

This resistance has built up over time for many reasons, from a lack of general knowledge about the aggregate industry by the general public to poor communication between producers and stakeholders and environmentally harmful practices (although the latter is becoming less of an issue due to continuously evolving environmental guidelines, advancing technologies in the pits, a more educated workforce, and increased interest from producers to have environmentally sustainable operations).

Despite stricter environmental regulations and technologies that allow for safer, more efficient practices in quarry and pit operations with smaller environmental footprints, some stakeholders are still hesitant, or completely resistant, to producers operating within their communities. Although producers and industry associations have been actively trying to educate stakeholders about the need for close-to-market aggregates to keep costs under control for vital projects such as the construction and upkeep of roads, and the building of new schools and hospitals, this argument is often not enough to sway them; and is of little interest to NIMBY groups. Part of the challenge for Canada’s aggregates industries is that there has never been certification in place that can be shown to stakeholders as a sort of “seal of approval” that states that certain requirements have been met that prove the producer is operating in a environmentally and socially responsible manner.

In Ontario, industry and various other stakeholders have been working for several years to solve this problem through the creation of the Cornerstone Standards Council (CSC); a charitable organization that was formed in the summer of 2012 by community stakeholders, environmental groups and progressive industry members that came together to find positive, pro-active solutions for existing conflicts and contention over how aggregate sites are located and operated.

The official mandate of the CSC is “to develop and implement certification of responsibly sourced aggregate materials to improve the conservation of the environment, compliance with existing laws and community health and wellbeing in Canada,” while primarily focusing on a voluntary certification system for Ontario.

“CSC’s audit process is a rigorous, on-site, assessment of how well a pit or quarry meets the core requirements of CSC’s Responsible Aggregate Standard,” explains CSC director of certification Krista West. “We go over and above in our efforts to ensure we have a fulsome picture of how the site operates by speaking with the company and also with neighbours, local rate-payer groups and municipalities.”

Since its inception, the CSC has developed the Responsible Aggregates Standard and the CSC Certification Scheme, an integrated program of standards, conformance assessment and communications materials that is developed, owned, operated, governed and promoted by the CSC.

The purpose of the scheme is to foster a prosperous aggregate materials industry across the country that is recognized nationally and internationally for “setting the bar” for environmental and social practices. The CSC’s certification system is a tool for assessing a pit or quarry’s conformance with CSC standards and manages the issuance and maintenance of CSC certificates. These certificates are issued only when an applicant demonstrates conformance to the requirements of the CSC Responsible Aggregate Standard at a pit or quarry during an on-site audit.

“Aggregate operators who receive certification benefit by being recognized as a more responsible aggregate operation,” says Nicholas Schulz, executive director for the CSC. “This carries both a stronger social license amongst neighbours and the local community but it can also mean preferred procurement from green builders and municipalities who are looking to encourage more responsible aggregate practices.”

Pilot project
After developing a set of standards, the CSC decided to test out its certification process over a two-year pilot project that began in January 2015. The pilot project allowed the CSC to perform on-the-ground applications of the CSC standard to better assess its strengths and weaknesses so it could be refined and improved.

In 2016, CSC officially issued its first certification to CRH Canada Group’s (Dufferin) Acton Quarry in Acton, Ont. Since that time, two more aggregate operations have demonstrated conformance to CSC’s standard and been granted CSC Certification. These include Lafarge’s Oro Pit and CRH’s Paris Pit. The assessment of the Miller Carden Quarry is still in process and the outcome will be announced this fall and St Marys Cement’s Coderington Pit will undergo assessment in September 2017.

These audits are conducted by a team of auditors lead by the CSC’s director of certification, Krista West.

West has several years of auditing experience in social and environmental standards. Before joining the CSC, she completed over 30 Forest Stewardship Council (FSC) Forest Management Audits across Canada. She also managed and oversaw a portfolio of over 40 million hectares of FSC certified forests across the country and trained auditors around the world. Additionally, she works in certification of aluminium as an advisor to the Aluminium Stewardship Initiative, based in Australia.

The CSC’s certification system is a tool for assessing a pit or quarry’s conformance with CSC standards and manages the issuance and maintenance of CSC certificates.

Assessment process
The process for getting assessed by CSC begins with an Assessment Plan, including a detailed schedule.

The assessment schedule is broken down as follows:

Stakeholder communications
As part of every audit, CSC sends notifications to all Aboriginal groups and interested parties with a known interest in the operation. The audit team follows up with Aboriginal groups and interested parties during the audit process to hear input from all perspectives. Upon completion of the audit, the report is emailed directly to the individuals who participated in the audit and it is posted on the CSC website, thus increasing the transparency and integrity of the CSC audit process.

A bright future
Since its initial pilot project was completed, the CSC’s certification system has been increasing in popularity, and the organization has received numerous applications from producers looking for the CSC’s stamp of approval.

In May 2017, the CSC officially rolled out a hiring campaign for recruiting additional auditors for auditing applicants’ pits and quarries across Ontario to test their eligibility for certification.

And it’s not just producers that are pushing the value of CSC certification, municipalities are also realizing the value of the certification. This past July, the Town of Erin became the first municipality to include CSC as part of their procurement evaluation criteria. This means contractors using aggregates sourced from a CSC certified pit or quarry will gain an advantage when bidding on jobs.

“CSC benefits Ontario by bringing together aggregate operators and community groups to find a less contentious approach to the conflicts that arise in the sector,” Schulz says. “Rather than focusing on lengthy and expensive legal battles, CSC acts as a carrot that rewards more responsible operations with procurement opportunities from green builders and like-minded municipalities.”

You can be sure that the Town of Erin is only the first of many municipalities that will prefer their aggregates be sourced from a CSC certified pit; and that push by municipalities will be a monumental force in getting pits all across the province to apply for certification. And with that push will come an increased interest in ensuring pits are kept up to the CSC’s standards, setting a new bar for environmentally and socially responsible aggregates extraction across Ontario; and hopefully one day, all across Canada.

To learn more about the CSC certification process and the CSC Responsible Aggregates Standard, visit
www.cornerstonestandards.ca.