News
State of the Industry Report

Our annual look at the national aggregates and road construction industry 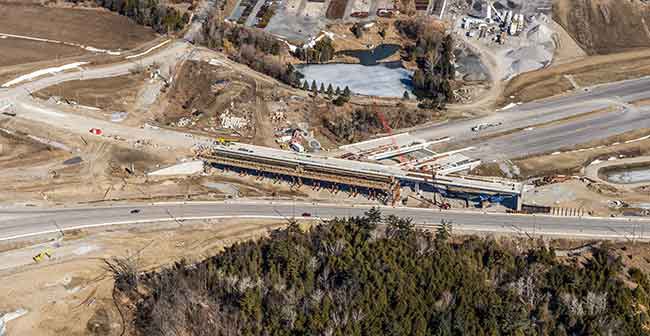 February 24, 2016 – In a year that saw cutbacks, mergers, acquisitions and slowing imports that changed the face of the equipment industry in Canada, we were also met by progress in infrastructure renewal and growth, certification, emissions and material development that began to positively change the face of the industry itself.

Looking back
Canada drives into 2016 with some uncertainty in its government’s plan for long-term infrastructure funding as the new Liberal government moulds its own plan for federal funding support.

During the campaign, the new government promised new funding for climate resilient infrastructure, removal of the P3 stipulation for projects through the New Building Canada fund, and an annual end of fiscal year top-off of the Gas Tax Fund for municipalities based on unspent infrastructure funds as well as a few other provisions. Over the course of 2016, we should gain a better comprehension of just how those funds will help road and bridge construction in Canada, as well as the impact of a potential increase in demand for aggregates.

The new deals for infrastructure, once funding starts rolling out, should provide a big boost to the heavy equipment manufacturing and distribution industries, part of which was hit hard over the course of 2015. Slumping oil and gas, agriculture and mining sectors, combined with only moderate growth in aggregate and cement production and road construction activity, meant companies like Caterpillar took a solid hit in 2015. In the U.S., Caterpillar announced layoffs and consolidation measures while one of the company’s Canadian distributors, Finning Canada, announced the closure of some of its centres. The Caterpillar announcement in May, and subsequent Finning announcement in November, was preceded by job layoff announcements at Deere and Co. in January and CNH Industrial in March, with Volvo conducting layoffs in November of the previous year. The boost from the new funding commitments are likely not enough on their own to bring those jobs back, but a boost to the heavy construction industry may help temper future cutbacks.

Keeping one theme of equipment manufacturers, a few made some interesting moves in the mergers and acquisitions department in 2015. There was no bigger story on that front than the $40-billion merger of Lafarge and Holcim to create LafargeHolcim, a global giant in the production of aggregates and cement. In May, the Competition Bureau green-lighted Holcim’s plan to sell-off North American assets as part of its merger with Lafarge S.A. Expect to see movement on the sale of the Canadian assets in the coming year.

Superior Industries made major strides to capture a great share of the Canadian conveyor market with two purchases; the acquisition of Clemro Western in March followed by the purchase of MFE Manufacturing in April. The purchases also added new products to their portfolio and added regional manufacturing capacity.

New tougher emissions standards have not yet been implemented at the national level, but that hasn’t stopped contractors from purchasing new equipment featuring interim Tier 4 and Tier 4 Final emissions technology. Many distributors from coast-to-coast have seen an increase in sales of these machines despite less-clean alternatives still being available on the market.

Environment continues to be a growing stipulation in new road and bridge construction projects across Canada, as government stakeholders look to contractors for the least-invasive solutions possible in the creation of new infrastructure. Environmental assessments have become an integral part of new builds, and community backlash has created a heightened level of sensitivity towards anything that will affect the local ecosystem. That sensitivity has already put one major new project on indefinite hold: the creation of a new 400-series highway in Ontario.

Provincial commitments
Government stakeholders continue to invest in new infrastructure despite the new cost of doing business. Despite budget constraints and sprawling debt loads, many of Canada’s provinces and territories are increasing funding for road and bridge construction and rehabilitation.

Nova Scotia
Nova Scotia is seeing an increase in transportation and infrastructure renewal spending in the 2015-16 budget despite measures by the province to work towards a balanced budget. Forecasted spending in 2014-15 was pegged at $414.9 million, while the budget estimate for 2015-16 sites at $419.3 million.

New Brunswick
The Government of New Brunswick has made a funding commitment of $413.3 million for the 2016-17 fiscal year. That funding represents an increase of just under one per cent from the $409.5 million allocated in 2015-16.

Ontario
In 2015-16, Ontario has committed $2.46 billion for the repair and expansion of the province’s highway and bridge network. The funds are split between $1.9 billion committed to projects in southern Ontario, and $560 million for projects in northern Ontario.

In addition, the province has allocated $425 million for design and property, as well as $300 million for other provincial transportation infrastructure like remote airports, service centres, ferries etc.

Manitoba
The Manitoba Government is currently in the second year of a five-year, $5.5 billion budget for infrastructure projects, with $3.76 billion set aside for roads, highways and bridges.

During the November 2015 throne speech, Premier Greg Selinger announced his plan to extend the plan beyond 2020, adding three years at $10 billion. However, Manitoba one of two provinces faced with a provincial election in 2016, so the addition to the plan could potentially be changed.

Saskatchewan is also heading to polls in April along with their neighbours to the east, which could cause a shift in funding for roads and bridges in the province.

Alberta
Alberta has remained solid in the wake of the decline in the province’s oil and gas sector. Last year, we reported that the provincial budget (set by the Conservatives), would see $5 billion spent on provincial highways from 2014-17.

Under the new NDP Government, $6.8 billion has been allocated over the next five years, with $4.7 billion dedicated to the provincial highway network and $2.1 billion for bridge construction and pavement rehabilitation.

British Columbia
Transportation and infrastructure spending has remained consistent in B.C., as the provincial government works to provide a balanced budget. Estimated spending for 2015-16 sits at $814 million, up from a forecasted cost of $812 million in the previous year. The province estimates spending to stay at $814 million for 2016-17 before rising to $816 million in 2017-18.

Yukon
The Yukon Government has committed $109 million for spending on transportation infrastructure in the 2015-16 fiscal year. The budget is broken down into $54 million for operations and maintenance and $55 million for capital. Of those budgets, $43 million of the O&M budget is dedicated to roads, highways and bridges, along with $49 million of the capital budget.

What’s ahead in 2016
There are a lot of reasons to be excited about the prospects for 2016, especially for those involved in the road construction industry. Major projects continue to ramp up in Alberta, Ontario and Quebec, and developments in New Brunswick in 2015 bring the prospect of positive growth in Atlantic Canada. All this without even factoring in what could be introduced by the Trudeau government, so there is reason for optimism.

South of the border, 2015 finally saw the U.S. take a step forward with the signing of the five-year, $305 billion FAST (Fixing America’s Surface Transportation) Act in December, following 36 short-tern extensions. That should provide a strong footing for infrastructure growth in North America, creating a strong regional environment on a global scale that should attract new business and investments from international partners.

On the aggregates front, this should be a year of steady growth as continued investments in new infrastructure across the country are offset by slowdowns in regional markets affected by slumping oil and energy markets. With underground mining slowly gaining steam in some regions, and the likely start of new infrastructure for the eventual Ring of Fire development, there should still be a steady need for aggregates in most regions of the country.

The aggregates industry will want to keep a very close eye on what is happening in Ontario though, as the government prepares to introduce changes to the Aggregate Resources Act. Should the changes have any impact on current operations, rather than just the introduction of updated standards for new licenses, the negative impact will be felt throughout the country.

From an equipment standpoint, expect to see the flood of Tier 4 Final equipment into operations continue, as contractors become more comfortable with the technology. However, the weak Canadian dollar continues to be a factor in the purchase of new equipment from the U.S. Until the dollar improves, it could be a tough start for distributors relying on new equipment sales. That being said, an uptick in the parts and rental business could offset this to some extent as contractors look for temporary solutions rather than invest in new equipment.

Of all of the Canadian companies to watch this year, LafargeHolcim tops our list for three reasons. First, we expect to see movement on the asset sale of Holcim properties in Canada as part of the merger agreement. Second, as mentioned earlier, Lafarge’s experiments with renewable fuel sources at cement plants in Ontario and B.C. are providing real alternatives for clean energy solutions for the aggregates and cement business in Canada. And third, there are some innovative concrete products that have been at the small-scale phase that could potentially become commercial-scale in 2016, including its permeable products (already in use in parking lots) that could make their way to the streets.

All in all, the continued government commitment to new and renewed infrastructure spending should make 2016 a year of positive growth for the aggregates and road construction industry.