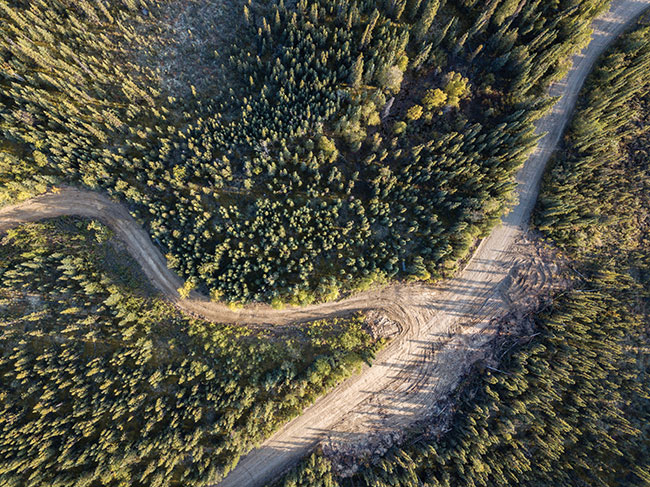 There is a push underway in the Yukon to build roads that would serve the needs of resource extraction companies; however, a charity dedicated to protecting the wilderness wants the brakes tapped on such projects until proper land use plans are completed in conjunction with First Nations communities.

The group is calling out the Yukon Environment and Socio-economic Assessment Board (YESAB) for approving road projects linked to natural resource extraction before land use plans are completed. A report produced by the group, called Eroding the Yukon’s Wild Character, maintains that the full weight of the impacts of the resource roads aren’t being adequately accounted for by the assessment board.

“The Yukon is one of the few places that still has great expanses of roadless landscapes,” says Malkolm Boothroyd, campaigns co-ordinator with the Yukon chapter of CPAWS and author of the report. “These places help give the Yukon it’s rugged identity, and are places where wolves and caribou and grizzlies can still roam freely.

“But at the same time, we’re seeing new resource roads being proposed, that if built, would cut into some of these wild places. The Yukon’s current environmental assessment procedures aren’t well suited to studying roads, which can transform entire landscapes. This could become a big problem.”

The CPAWS report recommends that thoroughfares into roadless areas should be treated cautiously, especially roads proposed in areas of high ecological and cultural significance, and that decisions about where roads are acceptable should be made through land use planning and in conjunction with Yukon First Nations.

According to the report, the YESAB should take great care when evaluating roads in areas without completed land use plans and the Yukon government should require companies to post sufficient financial security to cover the cost of resource road reclamation and commit to timelines in advance of construction.

Land use plans should also set thresholds on linear disturbances throughout planning regions, the report states.

“Resource roads can bring many unintended consequences, especially when they cut through wild spaces that are still roadless,” Boothroyd says. “Once a road makes a ‘first cut’ into a roadless ecosystem, it suddenly becomes much easier for other industries to access these areas.

The report notes that the Yukon’s decision-making processes are not well prepared to address far-reaching impacts that such roads would bring and, while land use planning is the best way to address big picture questions like where roads are acceptable, they have not been completed in most of the Yukon.

“That means that decisions about road developments are being made through low-level assessments by the Yukon Environmental and Socio-economic Assessment Board,” the report states. “Without direction from land use plans, some of the most important implications of road developments will be overlooked.”

Boothroyd says the report was prepared to get more people thinking about the consequences of such developments. Resource roads are the often-private roads that mining companies use to access lands and resources.

“Roads have been called a ‘sleeping giant’ in the understanding of humankind’s impact on the planet. Impacts like roadkill are easy to see, but many impacts of roads aren’t. Roads can disrupt wildlife migrations, and many species avoid habitats near to roads. Roads can open up more areas to hunting and poaching, and make it easier for resource extraction industries to access new areas.

“I’m not saying that mining should never happen, or that easy access for hunters is a bad thing. But it’s important that there’s an understanding and an acceptance of how resource roads will transform landscapes, and those decisions need to be made through land use planning,” Boothroyd says.

The report notes that land use planning should be appropriately funded to help ensure that plans are completed in the remainder of the Yukon’s land use planning regions within the near future and, in lieu of land use plans, YESAB and the Yukon government should respect the land and resource plans created by First Nations.

Resource roads, according to the plan, should be co-managed by the Yukon government and the First Nations whose territories’ roads cross. That co-management should include the power to regulate industrial usage and industrial traffic levels, road lifespan and reclamation as well.

Boothroyd says the Yukon has a well-respected land use planning process, created through the final agreements between the Crown and Yukon First Nations. The process is designed to integrate the interests of First Nations and the public, and make collaborative decisions about the future. Two land use plans are complete, and another is underway, but the majority of the Yukon territory doesn’t have a finalized land use plan in place.

“CPAWS Yukon would like to see land use plans in place before major new resource roads get built into roadless ecosystems,” explains Boothroyd. “We’re not talking about spur roads, or resource roads in areas that already have significant road access. Our main concern is major resource roads that would cut into intact ecosystems.”

An example is the 65-kilometre-long access route being proposed by ATAC Resources, a Vancouver-based exploration company, that would run through a remote section of Na-cho Nyak Dun territory north of Mayo, Yukon. The thoroughfare would connect to a series of gold and copper claims held by ATAC. The Yukon government and Na-cho Nyak Dun First Nation are working on a land use plan for the Beaver River Watershed, though the plan is going on the assumption that the road will be built.

CPAWS did recently score a victory of sorts when the Yukon government decided to make changes to the $470-million Yukon Resource Gateway Project, a proposal to build and upgrade 650 kilometres of mining roads in the mineral-rich Dawson and Nahanni ranges to stimulate resource extraction, and which prompted its report.

The initial version of the project included a road corridor that would have linked Dawson City and Carmacks by upgrading a series of small mining roads, and cutting a new segment of road to link everything. CPAWS Yukon had huge concerns about the impacts of that segment of the Gateway Project on the Klaza caribou herd, a type of northern mountain caribou listed as a “special concern” under Canada’s Species at Risk Act.

The corridor that CPAWS was concerned about will no longer receive public funding. Instead, the money will go to fortifying bridges, and upgrading existing roads and highways in the Yukon. As part of this, the Yukon government plans to pave the road to Ross River, a predominantly Dene community that has lacked the transportation infrastructure that other Yukon communities have enjoyed.

Boothroyd says the changes are important because much of the world is engulfed by spiderwebs of roads, yet the Yukon isn’t like that.

“We still have roadless ecosystems that stretch for hundreds, even thousands of kilometres. I think that’s one of the things that makes the Yukon so special for so many of us,” he says. “Once resource roads are constructed, there isn’t really any going back. We need to think really carefully before new roads are cut into intact ecosystems, otherwise the Yukon’s wild character will slowly fade away.”