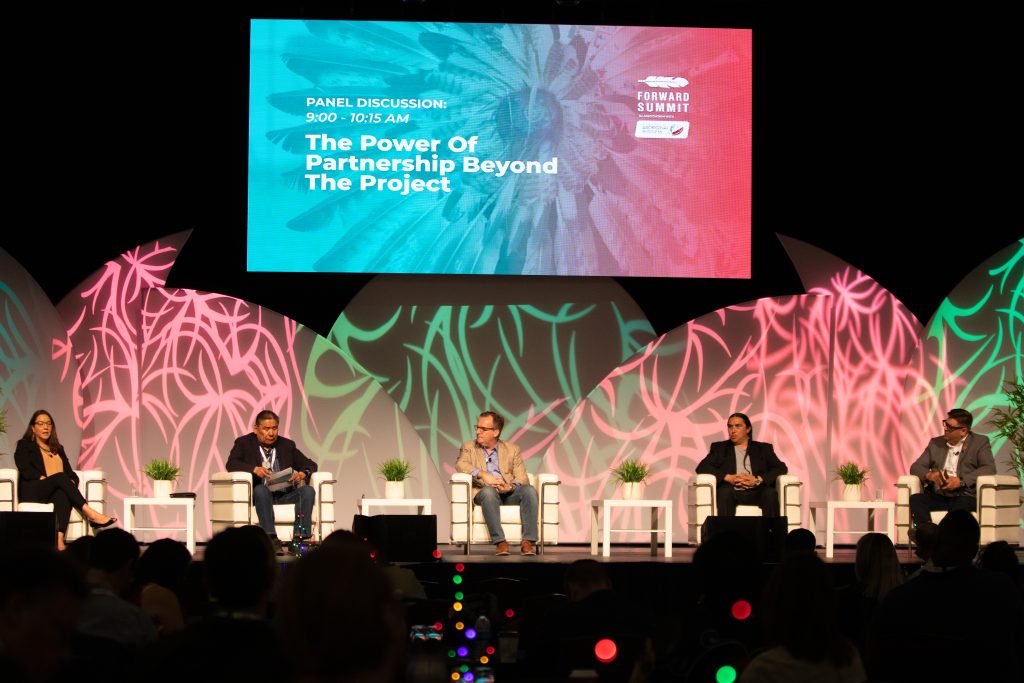 The Forward Summit 2022, in association with the Canadian Council of Aboriginal Business, featured a panel that focused on the value of true partnerships between industry and Indigenous communities.

The panel, “The Power of Partnership Beyond the Project,” focused on the long-term partnerships involved in two projects: a collaboration between Whitecap Dakota First Nation and SaskTel to bring access to fibre-optic broadband service to the community of Whitecap Dakota First Nation in Whitecap, Sask.; and the Taza development project, a massive First Nations redevelopment project on 1,200 acres of Tsuut’ina Nation land in the Calgary area involving a partnership between the Nation and real estate developer Canderel to build a major commercial development. 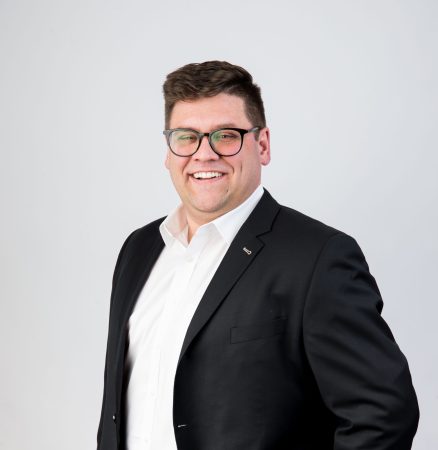 The first questions posed by Coldwell was, “How did you develop a vision for what you want it to achieve for the project, and what checks and balances or governance did you put in place?”

The first speaker to answer was Starlight, the Tsuut’ina Nation’s representative leading the long-term economic development mandate for the Taza development project.

“When we first went out to the market looking for partners for land development, we were focused mostly on true partnership, genuine partnership,” he said. “What we didn’t want to do was engage with a developer who was going to have us sit in the backseat while they did all the driving and gave all the directions. We wanted to actually actively participate in the design, the development, the creation of that vision, and then also the ownership on a long-term basis.”

Starlight added that one of the major impediments for many First Nations looking to take on larger infrastructure projects is a lack of access to free capital.

“So, the partner that we brought to the table had to realize that, and had to be willing to put up that that risk, while we put up the land as our own equity investment,” he said. “Being able to have that type of partnership where we both equally took on the risk, and we really took on the rewards was extremely important.”

The Tsuut’ina Nation also wanted to ensure that the development wasn’t a typical development you would see in Calgary or Edmonton or downtown Toronto.

“We wanted it to really speak that you’re on Nation land. This is a First Nation development and it’s not just about painting beads and feathers on the side of the building, but it actually integrates the culture, the tradition, and the ability for the Nation to have that ownership and have its members working there, both on a short- and long-term basis.”

Van Leeuwen says too often developers look at developing on First Nations land come in with the wrong approach.

“I think a lot of other developers look at developing on First Nations as we’ll come in, show you what to do, tell you what to do, and if we make money, we’ll share some. I think that’s a flawed beginning and a flawed start,” he said. 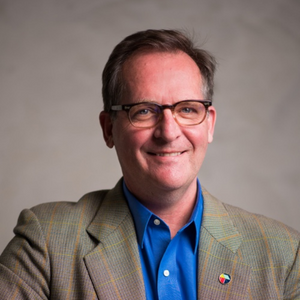 Van Leeuwen says Canderel took the approach from the very beginning that things had to be set up equally.

“And then from that point forward, you start to say to yourself, ‘Well, what does equal vision and equal opportunity mean?’ You know, the Nation has a tremendous value in their land. We, as a company, have a tremendous access to capital. How can you bring those things together to create an equal benefit?” he said.

Van Leeuwen said the benefits from the project need to come back to the Nation for a long-term reward.

“The idea is not to pull the money off this project so that it leaves the community. The idea is to make sure that this partnership truly is an inclusion,” he said. “We have a saying together at Tsuut’ina, and it’s more than just together in terms of Tsuut’ina and Canderel. We want to see everybody locally, regionally and further, not only come to get a benefit from being on the Nation, but also benefit back to the Nation for the long term. Our partnership, its first term is 40 years. I think if there’s any developers in the room, they would call us crazy. But we said, let’s set this out to have a long-term vision. That is what is making the partnership run well. It’s governed by a board of equal Tsuut’ina and Canderel. We have a dispute mechanism that we could put in, but we’ve never had a dispute because we’ve set it up on that basis.”

Councillor Royal said the collaboration between Whitecap Dakota First Nation and SaskTel was vital for the future development of the Nation for the casino and resort, residential development, as well as the development of new twin arenas. He added that having a strong internet infrastructure for business, and community was needed throughout the COVID-19 coronavirus pandemic.

“Before the pandemic we were having monthly Elders lunches. During COVID, we turned to Zoom with the Elders and bought them all iPads,” he said, adding that the internet infrastructure was also vital for e-Learning. 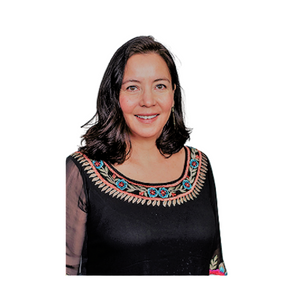 SaskTel’s Cameron said that the company’s executive supporting the project acknowledged early on that it needed to have a core group of people who are Indigenous and who understood Indigenous and First Nations communities.

“As a result, we’ve been able to create and develop some amazing partnerships and have that long-term vision and that strategy together with our customers and the communities,” she said.

The relationship between Sasktel and Whitecap Dakota First Nation has been developing over the past 20 years. About 15 years ago, the Nation built a cell tower with Sasktel as part of its long-term vision for economic growth. The internet infrastructure was another major step for achieving the Nation’s long-term growth, which also includes a golf course, hotel and a sub-development.

“But in order to have all that, they needed to have some infrastructure. And that partnership went together in terms of having that dialogue, we at SaskTel ensuring that we follow their vision, and we have those checks and marks in balance that we could identify and work with them and bring that construction to the community,” Cameron said, adding that now all community members have access to fibre-optic broadband service technology, which creates opportunities for the Elders and the youth.

The recent developments at the Nation have resulted in about 800 jobs between the casino, golf course and hotel, and more potential jobs could be created through the development of the twin arenas, a spa resort and future residential projects.

“In order to get investment, Sasktel and government recognized that there were investment opportunities for this project. More jobs mean better quality of life for our members,” said Councillor Royal.

“Any partnership has risks that are inherent to the partnership. How did you get them out on the table and start to have adult conversations about them?” he asked the speakers.

Starlight said ensuring that the Tsuut’ina Nation was directly involved in the project was key for mitigating risk while removing politics from the overall business decisions.

“Not to say that we don’t work with Chief and Council on a regular basis, but when it comes to the actual investment decisions, the way that we’re actually developing, and the speed of how we’re developing, we really had to ensure that it was moving at the speed of business,” he said. “What I’ve seen killed more deals than not is time. You delay too long, or the market changes, and all of a sudden, the project just goes out the window because you just weren’t quick enough. So, for us being able to have that transparency, where Chief and Council representatives sit on the board, but at the same time aren’t bound by the overall Chief and Council body to make that decision is extremely beneficial.”

Starlight added that updates were regularly offered to the community to ensure the project remains aligned with the community’s vision.

“What this helps us to do is survive leadership changes. Changes in Chief and Council, changes in administration even, where it can be very individually based a lot of times. Where someone’s mandate or priority may kibosh an entire development project, if you’re not careful,” he said.

The Nation also ensured that it had equal representation at a senior level.

“That’s where my role comes in, where we’re not just talking about a developer who’s acting as a third party to a board of directors that’s represented by the Nation. But you actually have someone who’s got boots on the ground, who’s getting their hands dirty, and actually taking part of the active development on a day-to-day basis,” Starlight said.

While the fibre-optic broadband service collaboration between Whitecap Dakota First Nation and SaskTel experienced a few “hiccups,” the Nation had someone in place that communicated with the community and Council about any concerns and questions that came up.

“People wanted to know when they were going to be hooked up, so we had that person communicate, and as of last year, everybody is hooked up. And, of course, manage the problems and expectations, and it went pretty smooth. So, that was a good project for us,” said Councillor Royal.

For more information on this session and others from the 2022 Forward Summit, visit: www.forwardsummit.ca.

All photos are courtesy of Forward Summit/Connect Partnership Group Ltd.