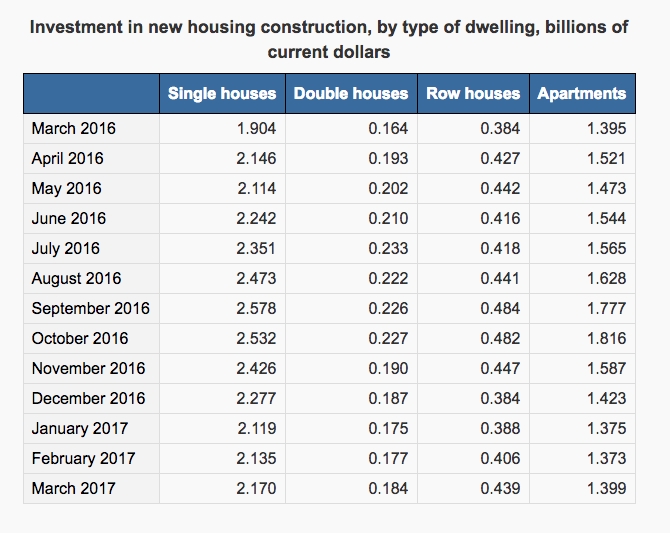 Nationally, higher investments were observed for the four main types of dwellings. The biggest gain was observed in spending on single-family dwellings, rising $265.8 million to $2.2 billion. This accounted for just over half (51.8%) of total spending on residential construction in March.

Investments in apartment building construction totalled $1.4 billion in March, accounting for one-third (33.4%) of total spending. At the national level, investments in this type of dwelling edged up 0.2% from March 2016. Five provinces posted increases for this type of dwelling, led by British Columbia ($70.3 million), while the other provinces reported declines, with Alberta falling by $52.7 million and Ontario down $17.2 million compared with March 2016.

Investments of $438.7 million in new row housing construction represent an increase of 14.4% compared with March 2016 levels. For this type of dwelling, eight provinces posted increases, led by Ontario with a $52.5 million gain year over year.

Compared with March 2016, construction spending on double dwellings rose 12.4% to $183.9 million in March, with every province except British Columbia and Manitoba showing increases.

Ontario continues to account for much of the national increase in spending
In March, eight provinces saw higher spending in new housing construction compared with the same month a year earlier. Ontario posted the greatest increase for a total of $1.8 billion in spending. However, Alberta (-$52.7 million) and Newfoundland and Labrador (-$6.7 million) posted declines.

Ontario saw increases for all types of dwellings except apartments, which fell 3.6% compared with March 2016.

Investment in new housing construction in Manitoba rose 39.2% year over year to $116.1 million. This gain was mainly attributable to higher investments in single-family dwellings (51.6%), although increases were posted for all dwelling types other than double dwellings.

Quebec was the lone province to have posted increases for all types of dwellings. Investments in apartment building construction accounted for 56.1% of total investments, the highest proportion among the provinces.