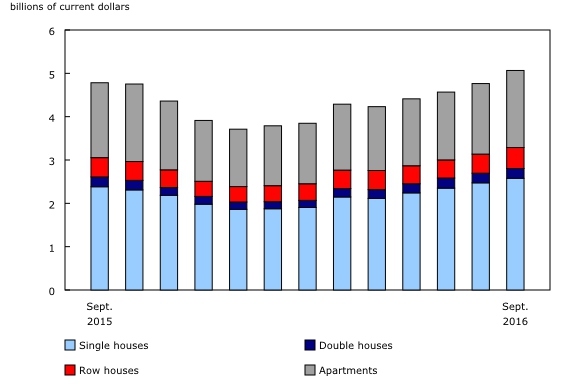 November 22, 2016 – Investment in new residential construction totalled $5.1 billion in September, up 5.9% from the same month a year earlier.

Nationally, the increase was led by higher spending on single-family dwellings, which rose 8.2% year over year to $2.6 billion in September. This marked the eighth consecutive month of year-over-year advances. Gains were also reported in spending on apartment buildings (+2.8% to $1.8 billion) and row houses (+8.7% to $484 million).

In contrast, investment in semi-detached dwellings edged down 0.2% from September 2015 to $226 million.

At the provincial level, advances in new housing construction were reported in four provinces, led by British Columbia and Ontario.

British Columbia recorded higher spending on all dwelling types in September, up 35.3% compared with the same month a year earlier to $1.1 billion. The gain was largely attributable to higher investment in apartment building and single-family dwelling construction.

In Ontario, investment in new residential construction rose 15.3% year over year to $2.1 billion in September. The increase resulted from higher spending on all four dwelling types, with single-family dwellings accounting for most of the gain.

Investment in new housing construction was down in six provinces in September compared with September 2015, with Alberta registering the largest decrease.

In Alberta, spending fell 29.0% from the same month in 2015 to $681 million in September, the 15th consecutive month of year-over-year declines. All dwelling types contributed to lower investment in new housing construction, with investment in apartment buildings and single-family dwellings accounting for most of the decrease. 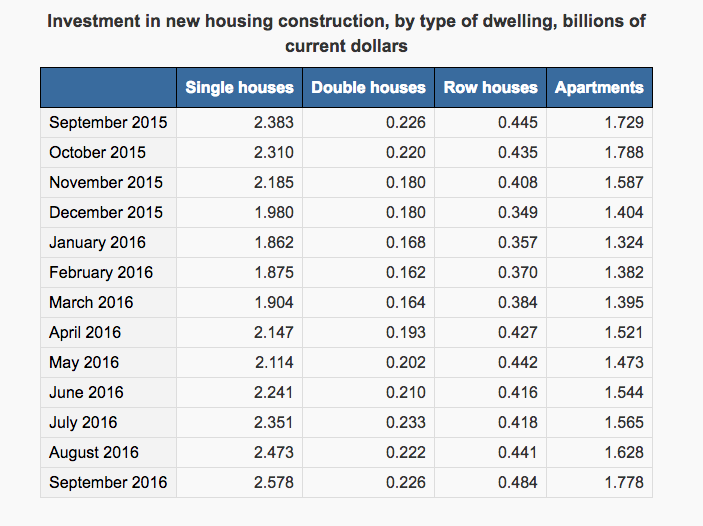