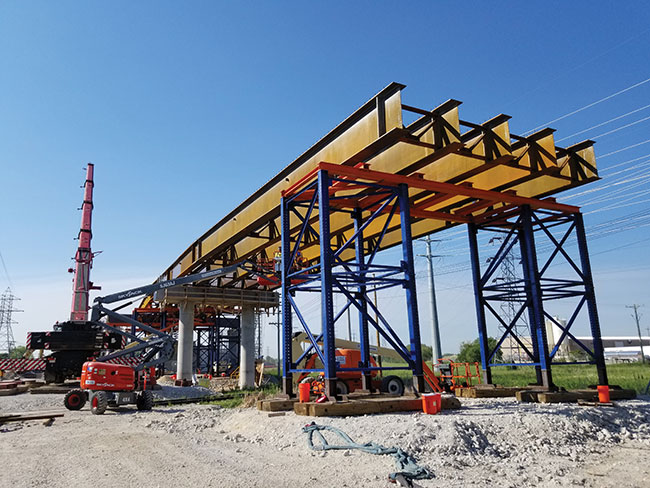 Finishing touches are now underway for opening the second leg of the $467-million Southwest Rapid Transitway in Winnipeg, Man., a showpiece roadway for buses that is the largest infrastructure project in the city’s history.

The dedicated high-speed busway corridor is scheduled to open in mid-April, completing a long-awaited high-speed link from Winnipeg’s downtown to neighbourhoods in the southwest quadrant of the city. The 11-kilometre thoroughfare is physically separated from the street system so transitway buses will be unaffected by traffic congestion and other incidents that occur on the regular street system.

Work on the massive project, the first of several rapid bus transit corridors proposed for the city, has been ongoing for a number of years. Plenary Roads Winnipeg was awarded the contract to build the corridor.

Phase one of the project, which runs southwest from Queen Elizabeth Way and Stradbrook Avenue in downtown Winnipeg to the Pembina Highway at Jubilee Avenue, was started in 2008 and put into service in 2012.

Work on phase two began in fall 2016 and extends the existing transitway southwards from the Jubilee interchange to the University of Manitoba and Investors Group (IG) Field, as well as residential neighbourhoods. Much of the work on the second leg of the transitway parallels the CN Letellier subdivision.

Phase two of the transitway has two arched bridges for crossing McGillivray Boulevard and the CN line. Significant construction was required at Portage Junction at the south end of Fort Rouge, where the transitway passes under the CN junction, requiring one CN bridge to be replaced and two new bridges to be installed.

City planners say the project will help accommodate dramatic population growth in southwest Winnipeg that will lead to more traffic on Pembina Highway. The transitway is deemed essential to moderate traffic demand on the roadway network and improve the overall performance of the transportation system.

Jesse Crowder, senior projects engineer with the City of Winnipeg who is overseeing the venture, says the transitway alignment allows buses to bypass several areas of traffic congestion on Pembina Highway.

“Development of a rapid transit system is a key component of the city’s transportation master plan to provide citizens with a viable alternative to the automobile, to reduce road congestion, and to build a transportation system that serves future generations,” he notes. “With the southwest area’s population expected to grow by 40 per cent by 2030, the transitway is essential to realize a mode shift required to moderate traffic demand on the roadway network and to improve the overall performance of the transportation system.” 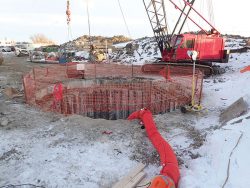 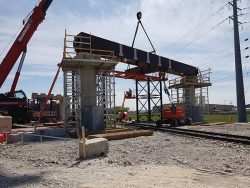 Girder installation for the Letellier overpass project, part of phase two of the Southwest Transitway. Photos: City of Winnipeg.

The transitway, he says, will allow for transportation options such as buses, active transportation, cars, and trucks to operate in a more sustainable and integrated manner. The transitway is primarily one lane in each direction. Work has included construction of two overpasses and two bridges, one underpass, one rail bridge and a pedestrian bridge as well as related items for each structure, including retaining wall structures and pump stations.

Eight new transit stations have been built along the second leg of the route that will have the same look and feel as stations in the first leg. Public art selected by the Winnipeg Arts Council is displayed at each of the transitway stations.

Park and Ride and Kiss and Ride parking lots have been built along with active transportation paths running parallel to the transitway.

The road project posed a number of construction challenges. With such a long corridor, for example, there were a lot of different worksites going at the same time and many different activities underway, which required a lot of co-ordination and scheduling by managers.

Some of the work was done overnight to minimize the impact on the public, in particular on the Pembina Highway underpass and the transit station at IG Field.

Crowder says one significant challenge was the component of work adjacent to IG Field at the University of Manitoba as it had to be completed in time for the 2017 Canada Summer Games.

“That component required the portion of the transitway between Pembina Highway and IG Field as well as the pedestrian bridge structure and event terminal to be completed prior to the 2017 Canada Summer Games. Construction only began in August 2016, but our team was able to meet the objective and get the facility ready for the Games.”

The group shortened one of the transitway bridges to reduce the number of spans and required piers and also altered the alignment of the active transportation path to eliminate costly structures, construction time and complexity.

On the main transitway, a tunnel was replaced with an overpass to simplify the design and construction. The replacement also eliminated impacts that had the potential to negatively affect the environment.

Crowder says substantial cost savings were realized through the refinement of the final design and that a competitive P3 bidding process allowed for project innovations and lower construction costs. The project was built under a design-build-finance-operate-maintain public-private partnership contract arrangement.

“In addition,” he notes, “the project was also advertised during very favourable market conditions that included lower interest rates and a reduction in the volume of work currently in the national marketplace.”

The transitway has already spurred new development along the corridor. The city reports that the first stage of the thoroughfare has stimulated new development approvals, including a transit-oriented community of more than 1,000 dwellings in the Fort Rouge Yards, and two new mixed-used towers near Osborne Station and Harkness Station. An additional 1,300 residential units have been approved for Bishop Grandin Crossing and further development is planned in the Parker Lands and Southwood Golf Course Lands.

The city notes that the first section of the transitway has yielded travel time savings of four to eight minutes on trips between the centre of downtown and the University of Manitoba, with greater time savings being realized during peak periods. Given the greater length of the second phase, it is expected that five to eight minutes of time savings will result from completion of that section of the thoroughfare. According to the city, the roadway is now being tested and bus drivers are receiving training.

The city is looking at building a number of other bus rapid transit corridors. A study was conducted for an eastern corridor in early 2017, with phase three of public consultations scheduled in 2020. The city is also considering an eastern transitway from the downtown east to Transcona, as well as a northwest transitway from Polo Park to downtown then north to Kildonan, with a spur to the airport.