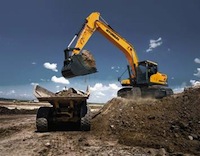 July 2, 2015 – Hyundai Construction Equipment Americas has launched the HX series of Tier 4 Final-compliant hydraulic excavators in the United States and Canada. The first models, which range from 22 to 52 metric tons and include the HX220L, HX260L, HX300L, HX330L, HX380L, HX480L and HX520L, are hitting the ground now. Smaller models and compact-radius models will follow in 2016.

Performance Innovations
New features include an innovative Boom Float mode for improved grading control, Fine Swing mode for improved load control when swinging, up to 13 per cent faster cycle speeds than the previous Hyundai 9A series excavators, IPC (Intelligent Power Control) for computer-aided power optimization based on load demand, and Eco Breaker mode for selectable pump flow and improved fuel consumption when working with Hyundai hydraulic breakers and many other attachments.

New Safety Features
New features like Hyundai’s exclusive AAVM System for 360⁰ surround virtual operating view – which displays on the 8-inch cluster-monitor – make this new Hyundai HX series among the safest excavators to operate on any jobsite in North America. Included in this 360⁰-surround virtual operating view is the IMOD (Intelligent Moving Object Detection) system that senses and warns the operator when objects come within 16.5 feet (5 m) of the machine. On the Hyundai HX series, the cabs are all ROPS certified, and with Hyundai’s optional FOG guard, the cabs also meet FOPS Level 2 standards. Other safety features include optional boom and arm cylinder locks, and an optional overload alarm.