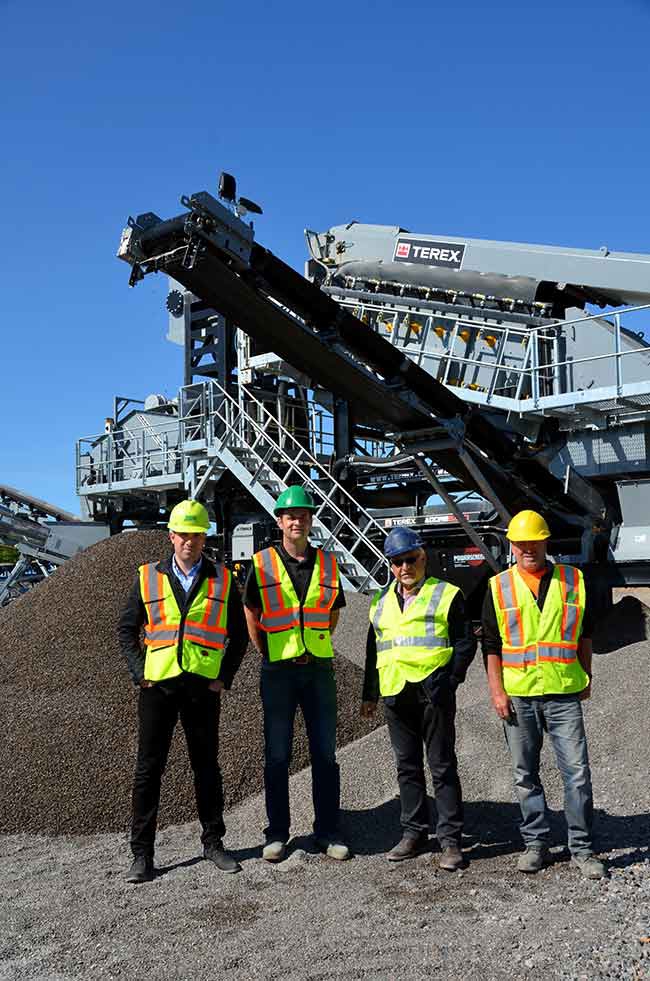 August 3, 2016 – It all starts with a purchase of a plot of land. In the case of Turk Valley Aggregates owners Tony Morra and Daniel Allegranza that plot of land was near Ontario’s Highway 401 about a 150-kilometre drive from Toronto’s downtown core.

Just a few years ago, the men behind Turk Valley Aggregates were the men behind another company, National East Ready Mix Corp., a Markham, Ont.-based business producing ready mix concrete for the construction industry in the Greater Toronto Area.

In 2014, the company began developing its new property, licensed for maximum extraction of 500,000 tonnes of aggregates per year with the purpose of developing a customer base for aggregate resources for both the ready mix and road building industries.

The Right Equipment
Getting towards that production capacity means putting the right equipment in place, something that Morra and Allegranza were quick to investigate. They were already in discussions with someone they were introduced to through Morra’s nephew: Brendan O’Neill of Powerscreen Canada.

After listening to the owners discuss the needs for the new pit, the creation of stone and sand and the desire to have a wash plant to create the desired quality of material, O’Neill suggested they look at the AggreSand from Terex Washing Systems.

The AggreSand would provide Turk Valley with washed sand and stone from a single machine, with up to five different specs being produced at any time. The downside would be the fact that the machine needs to sit in a single location on a cement pad, removing the flexibility created by using mobile crushing and screening plants.

I asked both Morra and Allegranza what made them consider the AggreSand when the idea was pitched by O’Neill, and without hesitation, both simultaneously replied that Terex “has a good name in the industry.”

O’Neill already had sold one AggreSand into southern Ontario, so he took the men to see the plant in operation. That demonstration sealed the deal for Turk Valley.

“So far, that decision has been the right one from the new pit,” Allegranza says.

“The plant works very efficiently, and is very quiet,” Morra adds. “The cyclone washing system washes the material much better than the auger systems we have seen in other quarries. It washes much faster, and it doesn’t send as much of the fines to the settling pond.”

The men have hired some experienced staff to help them run the new pit operation, but neither has extensive experience working in this environment.

However, the simplicity of the AggreSand has meant that their lack of experience with such an operation isn’t a factor. The entire system is automated, with a very simple startup that only takes seconds to start running.

Should there ever be a problem, the team at Powerscreen Canada isn’t far away. O’Neill and his team are within an hour drive should any assistance or troubleshooting be necessary.

Product Flexibility
With the AggreSand, up to five different stone and sand products can be made simultaneously. That provides even greater flexibility to provide the aggregates needed for the customer base that Turk Valley has established in the Grafton/Colborne area near the pit, as well for customers in the GTA.

Currently, the AggreSand is producing approximately 300,000-350,000 tonnes of material per year for Turk Valley.

“Producing that variety has allowed Turk Valley to reach out to both the customers looking for gravel products and asphalt sand for road construction, as well as those looking for sand and stone for ready mix concrete,” says Allegranza.

Related
Loading right the first time
Measuring for success: What it is, why it’s important, what to measure and why and how to get started
Expanding aggregate operations in eastern Ontario
Powerscreen celebrates 50 years!