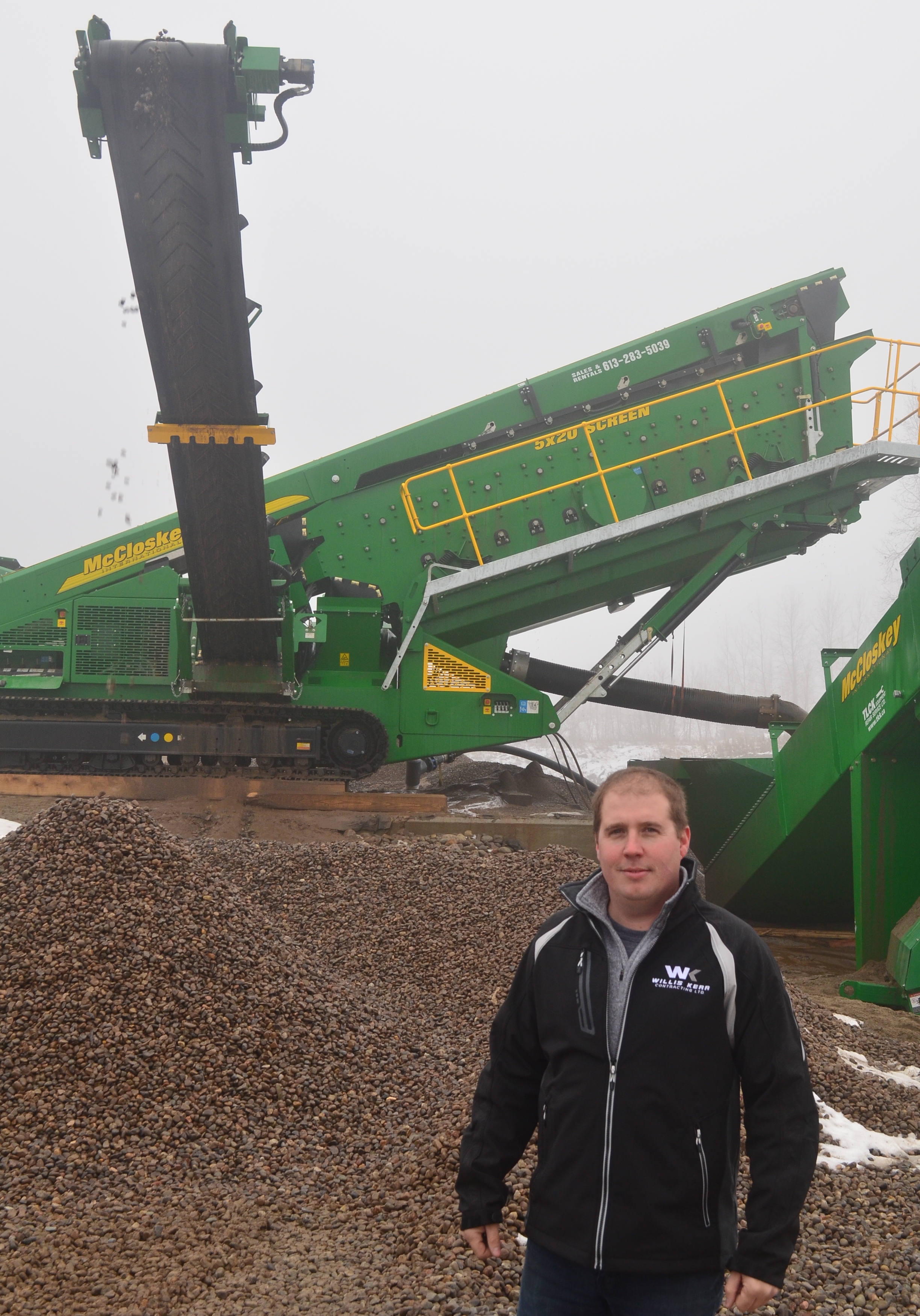 March 31, 2017 – Dean Kerr has worked in the construction industry for 20 years. As co-owner of Willis Kerr Contracting Ltd., he has been providing a variety of contractor services across eastern Ontario out of his company’s headquarters in Kemptville, Ont.; including road building; culvert and structure installations and rehabilitation; and topsoil, sand and gravel.

To facilitate an expansion of their aggregate operations in the fall of 2016, Kerr’s company purchased an additional property in Reid’s Mills, just east of Kemptville.

The newly acquired property allows the company to create a variety of products including, asphalt and concrete sand, filter media sand, crushed aggregates, and several washed riverstone options. In order to produce these new products, they needed to invest in a new wash plant. For this, Kerr reached out to Tim Bourne of TLCK Equipment Repair Service based in Lombardy, Ont.

“We’ve dealt with Tim for years,” says Kerr. “He’s always offered good service and good products. It’s nice that he sells a Canadian built product, and he’s very responsive. The equipment has to be good but the service needs to be better.”

Kerr has been extremely pleased with the results to date.

“It’s been running fantastic,” he says, adding that the new equipment has been processing about 30,000 tons of products a month for his company.

Kerr says one reason he decided to opt for a McCloskey plant was that the company’s manufacturing facility is located in Keene, Ont. only a three-hour drive away from Kemptville. Sean Loughran, director of McCloskey Washing Systems, says that Kerr’s washing system is an entry-level wash plant that has features that will benefit his particular operation.

“It’s hydraulically powered so no electric panel is needed,” Loughran says. “It’s a very compact plant, and mobile, so contractors can take it in and take it out. It can also be used as a dry screen… they would wash for part of the season and dry screen for another part of the season.”

Loughran says that McCloskey chose this particular arrangement for the customer because Kerr has two distinct sources for his material – dredges from a lake (with lots of fine sand and material) and another where he’s trucking material in from another site. Although neither one of the products on their own can be used to create asphalt or concrete sand, they are able to successfully blend the coarse and fine sands together to form a mix to produce both of the desired end products. Ironically, the screws that were selected for this plant were chosen due to some of their inefficiencies.

“Typically when you’re washing sand most customers want to remove 200 mesh and below. The screws do a decent job of that, but also take more than 200 mesh,” Loughran says explaining that since the fine particle content within the sand from the dredge material is too high to meet specs for asphalt or concrete sand, using the inefficiencies of the screw to remove some of the finer material is a benefit to Kerr’s operation.

McCloskey originally expected the plant to process between 180 to 200 tons per hour, but it has actually been processing 230 tons per hour.

The process
The wash plant’s 15-foot feed hoppers are loaded via wheel loader, that feeds a fines bin and an aggregate bin. From there, the material is transferred onto the main feed belt, which moves all material to a three-deck, 20 ft. x 5 ft. screen. Just before the material hits the screen it goes through a wash box; and at that point large volumes of water soak the material before being screened. The wet material is then screened and the material is segregated by mesh opening size. Spray bars on the lengths of all the decks at 2 bars of pressure help remove all the fine material and bring material onto the upper decks.

The machine processes four washed aggregates: in-spec sand, and three different sizes of washed stone. The in-spec sand is stockpiled for sale, and the other three stone products are sized and stockpiled, or crushed to create granular A, or granular B.

“We’re actually adding a bit more water then we normally would… so we can flush out more fines,” Loughran says, explaining that material is being cut at 150 mesh or higher to remove more fines to bring the material into spec – a 60/40 asphalt blend or a 70/30 blend for concrete.

Additional investments
The company is currently demoing Caterpillar and Komatsu loaders to see which is a better fit for its operations.

If history is any indication of Kerr’s purchasing decision, he will likely go with the Caterpillar model. His company’s current fleet consists of six excavators, three backhoes and one grader; and they’re all Cat machines. The only non-Cat machines in his fleet are his three Western Star dump trucks.

Beyond his latest investment, Kerr doesn’t have any other big expansion projects on the horizon for the time being.

“Just building on the foundation we have now and seeing whatever comes,” he says.