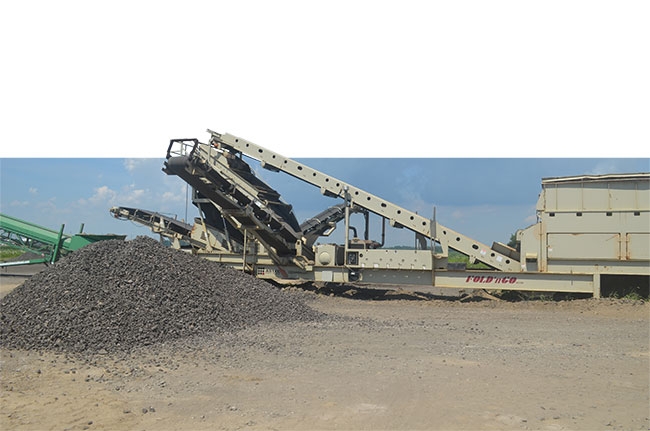 The company’s growth includes the creation of Sykes Aggregates Ltd. more than 15 years ago.

September 28, 2017 – Ed Sykes started his business with two gas-powered tandems to offer hauling services for aggregate and farming operations in the Chatham-Kent, Ont. area in the early 1970s. Now, more than 40 years later under his son Don’s management, Sykes Trucking Ltd. has grown to 16 employees in peak season with nine full-time staff.

The company’s growth includes the creation of Sykes Aggregates Ltd. more than 15 years ago, the company’s own aggregates production business, which includes its Eastman pit in Blenheim, Ont. and its Orford Sand & Gravel operation in Muirkirk, Ont.; as well as some pit shares with other local producers.

The Eastman pit is mainly used for producing B gravel, although the company also hires Harris Brothers Ltd., a local custom crusher to come on site and crush imported stone to create 2” to 3” and 3/4” railway ballast as well as crush recycled concrete down to 0” to 2” and 0” to 3/4“ piles.

“Recycled concrete is becoming a big thing here,” says Don Sykes, who is no stranger to the aggregate business. Now 53 years young, the industry veteran has been working in the business for 35 years.

“A lot of the ballast goes to farms. If you want to make a driveway, that’s the material.”

Orford Sand & Gravel is currently used solely for sand production. This location has no scale and no need for one. That is because the company invested in Trimble’s Loadrite system close to 15 years ago – originally installed into a green Terex loader but now resides in the company’s Volvo L90 wheel loader.

“I find it very simple to use,” Don says, adding that he finds the system is not difficult for training new employees.

“When we started with the railway ballast seven years ago we put one into the Komatsu 220 excavator,” Don recalls, saying that it saved his company time and money since he was previously paying between $5 and $10 per load. “Now they can load the truck, print off the waybill and they deliver the load where it needs to go. The savings, just in time, when they can hand them the ticket and say hurry back is great… if you’re not overloading then you don’t have to go back and start over.”

Don also finds the systems stand up well to the dust that is produced on site.

“Dust doesn’t seem to affect the printer, it’s a well-sealed unit,” he says. “We haven’t had any problems other than wear and tear on [keypad buttons].”

The company’s growth includes the creation of Sykes Aggregates Ltd. more than 15 years ago.

The screening at the pit is mainly done by an Astec Mobile Screens Fold & Go that then transfers some of the materials over to a McCloskey stacker for piling. The company also uses an older Powerscreen screener with a Powerscreen stacker in its operations.

“It’s been a great a machine. You can just pack it up and move it where you need it to go,” Don says.

At Orford Sand & Gravel, all loaders and the excavator are of the Komatsu brand.

The sand is processed by an Assinck screener and stacked using an old stacker that came with the pit when the company purchased the location.

Although the sand at the site is a high enough quality for use as concrete sand with the installation of a wash plant, the company is not planning on investing in washing equipment for the time being. The company currently produces mortar sand and weeping bed sand, although they do sometimes mix it with salt during the winter to help battle black ice when maintaining roads. The company has one steady plow truck it uses for plowing the Chatham-Kent Municipal Airport and the driveways of some of the local wind turbines.

Challenges
The upcoming changes in trucking legislation and finding qualified people are at the top of the list when it comes to challenges the company is currently experiencing.

That said, Don isn’t losing any sleep over it. The sand in the Orford location is plentiful and the company owns licences for a few pits in the area that currently sit idle.

“We’ve got a couple of licences we’re not using right now that we can dig into [in the future],” Don says.

Other than investing in new equipment whenever needed, Don says the company doesn’t have any big plans for growth at the moment.

“Nothing on the books right, but I’d never say ‘Never.’”