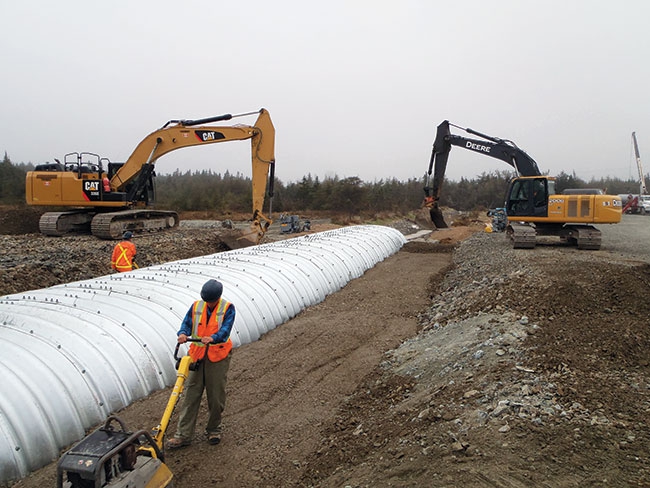 February 9, 2017 – The St. John’s Airport Authority is partway through a massive airport renewal project that includes rehabilitating its runways, building new roadways and parking lots and expanding the terminal. St. John’s-based Pyramid Construction is working to help make this happen, in what is otherwise a slump in construction activity.

“The past two years have been very slow. It’s tight. We had 10 really good years from 2005 to 2015, but it’s taken a bit of a downturn the last couple of years,” says Mike Sparrow, vice-president and co-owner of Pyramid Construction, along with his partners Wilfred Curran, who is president, and Andy Grainger, who is vice-president of operations.

The company began as Beothuk Construction and Paving in 1979 and was renamed as Pyramid Construction in 1987. Then in 2008 Pyramid created a subsidiary called St. John’s Asphalt & Aggregates Inc.

“We wanted to set up a manufacturing division and open up our business to other customers. Expand our sales and show other companies the products we make,” Sparrow explains.

Pyramid has worked all across Newfoundland and Labrador, but generally works in the city and surrounding areas. Projects range from street rehabilitation in the city of St. John’s and surrounding areas, to excavating, site preparation for a new residence at Memorial University, water and sewer installations, and highway and bridge overpasses, residential subdivisions and concrete work.

In addition, it operates two CAT 980 loaders, one Komatsu WA480 loader, one John Deere 644 loader that feeds the asphalt plant, one CAT D8 dozer and one CAT 735 articulated truck.

In its field operations Pyramid operates three asphalt pavers: a CAT A900B, the biggest paver in its fleet; a CAT AP600D paver; and a LeeBoy 8515 that crews use in tight areas like parking garages and walkways.

A Bomag BM2000 milling machine, a Roadtec 253 shuttle buggy, a Johnson asphalt heater scarifier for asphalt recycling, three CAT graders and 11 various rollers for both asphalt and subgrade work round out the fleet.

Although Pyramid does not build concrete road surfaces, they have a Gomaco C-450 concrete finisher they use for large concrete pads.

“We did several concrete apron pads at the St. John’s airport with it, and we also use it for bridge decks,” Sparrow says.

Other concrete work the company does includes cast-in-place bridge-work.

“We do bridges, such as a couple of cast-in-place concrete overpasses on the Outer Ring Road in St. John’s,” Sparrow says. However, he adds, “If the job calls for precast structures, we do this work as well. We’ve partnered with a local pre cast manufacturer, Capital Precast, to complete several cast-in-place bridges.”

A big job
To date, the biggest job Pyramid has carried out was its share of the St. John’s airport’s three-year, $37.3-million Airfield Accessibility and Safety Initiative. The huge project included closing down Runway 11/29, the airport’s main runway, for six months last year and doing a massive amount of earthmoving, trenching, sub-drain replacements, and lighting and wiring upgrading.

Over two years, Pyramid trucked in 100,000 tonnes of rock fill, and 60,000 tonnes of granular base and subbase. The company also installed over 3,500 metres of storm drainage pipe. Pyramid rehabilitated the runway by cold milling 55 milimetres of the old asphalt and supplying and placing approximately 42,000 tonnes of new asphalt. Pyramid also did a 7,000 square-metre expansion of the main terminal apron.

In September 2015, Pyramid began working on the first of two more contracts for the St. John’s Airport Authority, with a combined value of about $7 million. These include a redevelopment of an exit road and parking lots as well as a new roundabout and cell phone parking lot.

“We have the capability of doing all this work in house,” Sparrow says.

Work on the contract lasted just over two months before winter slammed the door shut.

“We pretty well had to close up in the third week of November,” Sparrow says. “We got going again in mid-April this year.”

The company completed the second contract this October.

Slumping economy
The current slump in the provincial economy has affected municipalities in the St. John’s area. They have cut back on their work, which affects one of Pyramid’s usually steady sources of work for its employees – as many as 200 of them during peak periods of construction.

“A big part of our business is street rehabilitation programs with the City of St. John’s. Full rehabilitation of city streets: curbs, gutters, sidewalks and roads. The work is kind of consistent, but the city cut down a bit this year,” Sparrow says.

As part of expanding its repertoire of capabilities, the company bought a Water Blasting Inc. water blaster for line painting removal.

“This is a new area of business we are looking to get into. There was a lot of line removal in the city for a bike lane project a few years back,” Sparrow says.

There has been very little work since then for the bike lanes but Pyramid hopes St. John’s will get back to that work in the future.

Sparrow admits that the problems with the provincial economy have cut into everyone’s work. The added tax burden that came down on everyone like a sledgehammer in the last provincial budget, including a two per cent HST increase and a 16-cent increase in the price of a litre of gas, has simply added insult to injury. Asked whether some construction companies might collapse under this added tax burden, Sparrow says, “No companies have gone out of business yet, but I suspect it’s coming soon.”

In the meantime, Sparrow hopes that St. John’s will keep spending to stay ahead of its aging infrastructure, even as the construction business suffers from budget cuts.