Features Aggregates
Concrete in their veins

Family-run business gets into custom crushing 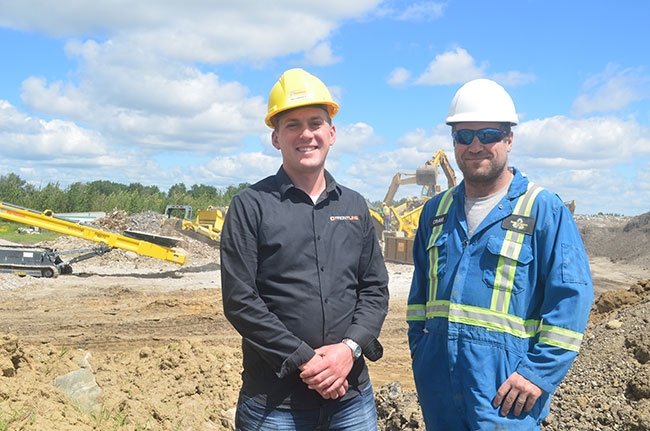 November 29, 2017 – Growing up, brothers Craig and Clint Fiessel learned all about concrete. Their father, Ervin Fiessel, has worked in the concrete industry for more than 40 years out of his business, Southern Concrete Cutting, based in Regina, Sask. The two brothers decided to join the family business in June of 1998 and learn the ins and outs of the industry, including cutting, coring and light demolition.

In June 2016, the two brothers decided to expand and start up Rock Crusher Recycling, a custom crushing operation based in Regina that serves the crushing needs of business all across The Prairies.

Rock to Road met up with Craig where he and his team were performing custom crushing work for Northern Material Handling at their private landfill in St. Albert, Alta., collecting, grinding and recycling between 35,000 and 40,000 tonnes of concrete to be reused on site for the expansion of their material handling site. “It works great for constructing temporary parking lots, and roadways,” Craig says.

Investment
To commit to serious production of recycled aggregates, Craig and Clint checked out a variety of crushing and screening equipment to see what they believed would best handle the tough crushing that takes place in the recycling market, with additional products such as steel rebar adding to the wear and tear of equipment. The two brothers ended up opting for a Keestrack R3 crusher, K4 screener, and S3 and S5 stackers, which were supplied by Frontline Machinery, based out of Chilliwack, B.C.

“We’d been looking at crushers for quite a while,” Craig says. “We went out and met with Daryl Todd and Rowden Todd, and saw that they carried replacement parts close to $1 million… we also liked that they were family owned.”

To feed the concrete into the Keestrack machines on site, Rock Crusher Recycling uses three Caterpillar excavators and one John Deere excavator equipped with a variety of Shearforce attachments, including a magnet, hammer, pulveriser and bucket. They also have an older Cat dozer on site to help move material around the site.

“So far we haven’t had too many issues [with the Keestrack equipment],” Craig says, adding that the manufacturer is apt at making changes to equipment to accommodate a customer’s needs. In Craig’s case, a couple of changes were adding wear plates to the crossbeam of the Keestrack R3 and adding a fin pulley to a tail pulley for better access to keep it clean and prevent jamming. “They sent someone to make the changes for us… some of the tail pulley was covered by Keestrack and Frontline covered the cost to have some other modifications made.”

“This year its all-year-round,” Craig says. “We were crushing at -30C, of course you can lose two hours for your start-up time. In our yard we use water suppression when crushing in the city, as well as special glasses and dust masks.”

Craig says that it feels good to be a productive member of the construction material recycling chain, reducing waste while supplying roadbuilders and contractors with low-cost materials.

“It’s nice when they need the material and we save them on cost… in Regina some are trucking it up to 100 kilometres to get the material,” he says. “Some landfills won’t accept concrete anymore because it’s non-compactible. It works out great. We’ve received nothing but compliments on the material we’ve made.”

A few good people
The company is a relatively small outfit, with six to seven full-time people, including the two brothers running the operation.

“We’ll add some local help when a project needs it,” Craig says. “When we’re running in the yard we’ve got one or two people pushing and delivering products.”

To help run the new venture, Craig and Clint also brought on Donnie Maynard, a veteran when it comes to running mobile crushing operations.

“He’s a huge asset to our team,” Craig says.

Rockcrusher Recycling has already locked down its next major concrete recycling contract at another landfill, and the two brothers are always considering the possibility of expanding its operations further.

“If we’re constantly working we’re looking at potentially adding another crusher or a bigger crusher,” Craig says. “For our current size and weight, what we’ve got now makes sense… we focus on one site at a time.”