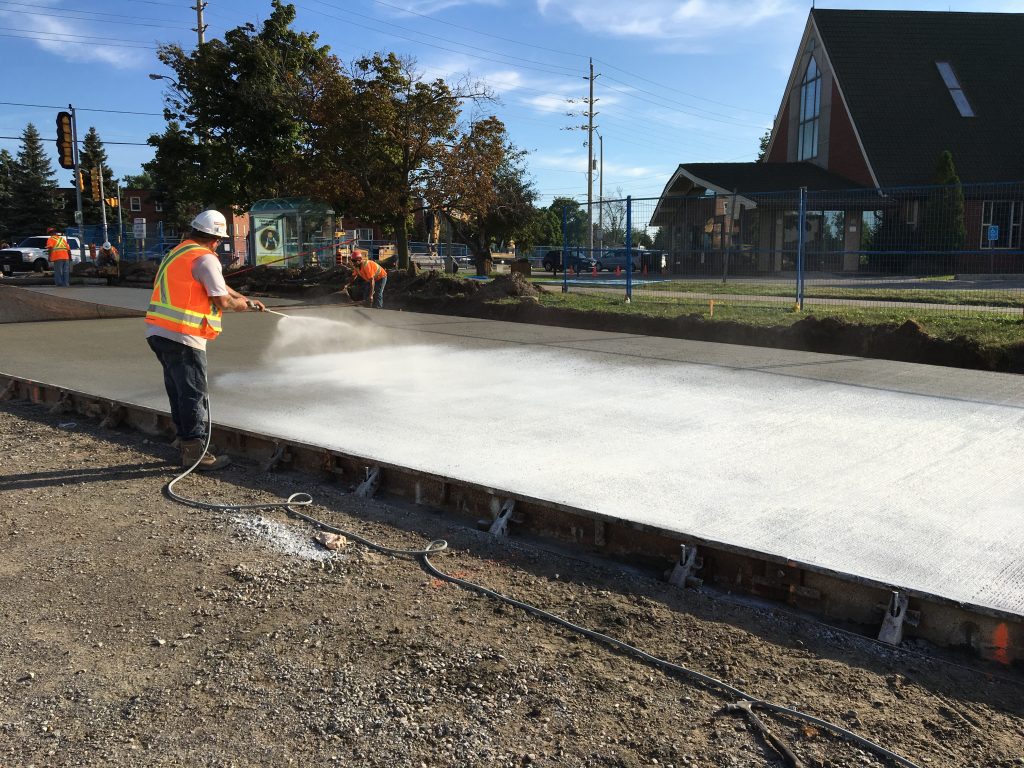 Images courtesy of Region of Durham and Concrete Ontario

December 6, 2016 – The Region of Durham in southern Ontario is looking for new solutions to combat major rutting and shoving issues it is experiencing on asphalt pavements across major arterial intersections.

One of the solutions it is testing is a pilot project to determine if concrete is a suitable alternative to solve some of the issues the region is experiencing at various intersections. The municipality chose the intersection at Harwood Avenue and Bayly Street in Ajax, Ont. for the pilot.

“We noticed that our typical asphalt designs have not been holding up on some of our busier roads, so over the past couple of years we’ve been developing a new standard for our major arterial intersections,” explains Ben McWade, project manager for Works Department Transportation Design
at the Regional Municipality of Durham. “This particular intersection was exceptionally rutted and needed to be addressed immediately… we initiated this pilot project to see if a jointed plain concrete design would be a more suitable alternative at these kinds of intersections.”

The promise of concrete’s ability to stand up to the long-term heavy traffic the intersection experiences from high volumes of heavy trucks and buses is what sold the idea to McWade.

“Obviously it’s got a higher cost of construction, so if we can see the offset benefit of that, that’s what’s really going to sell us on doing more of these,” he says. “Over time, we’ll see how much maintenance the intersection requires.”

The concrete pavement’s performance is going to be evaluated over time and compared to similar locations where asphalt designs have been implemented. If the pilot project is deemed a success, it could open the doors to future opportunities for using concrete pavements at intersections across the region.

The closing date for the pilot project’s tender was May 19, 2016 and it had four companies bid on the project. Dufferin Construction ended up winning the bid and was awarded the contract, which was valued at just under $1.2 million. The project took place over the course of the summer, consisting of the removal of asphalt and granulars, concrete curb and sidewalks; and the construction of concrete pavement, concrete curbs, subdrains, PVC watermain and concrete sidewalks.

“Dufferin is very experienced so we didn’t foresee any issues regarding the contract,” says Alen Keri, technical services engineer for Concrete Ontario.

One of the challenges that had to be watched closely during the project was consistent 30C weather, which can present challenges for concrete placing and curing. Despite the hot weather, Keri says the project ran very smoothly.

“Feedback has been very positive so far and we have even conducted a pave-in to showcase the project to other municipalities,” Keri says.

Dufferin completed the concrete paving using fixed forms and a vibratory roller screed. This allowed them to work within the confines of the existing curbs and around the traffic medians. Since this project had the luxury of having a construction site that was isolated from traffic, accelerated concrete mix designs were not utilized but are always an option, if required.

Concrete maturity testing was also completed by Dufferin to cover all the bases for the pilot project. This involved monitoring the internal temperature of the concrete slabs, correlating this temperature to calibration curves and determining when the in-place concrete has reached a minimum of 20MPa to be suitable for traffic loading. Maturity testing can significantly reduce the delay in opening the roadway to traffic.

Learning curve
Since it was his first time designing with concrete paving, McWade says there was a bit of a learning curve.

“The design was put together in-house and then we hired Golder to do the geotech and the make-up,” he says. “As far as the challenges go, just learning the ins and outs of concrete design versus asphalt, the biggest difference is the joint layout design – where all the saw cuts are going to go – and then designing all the dowels, the tie bars and the spacing and deciding where to put them and where not to put them.”

The team at the Region of Durham spent a significant amount of time focusing on the construction staging aspect of the project.

“Right off the bat we thought the biggest holdup would be the staging and curing times for the concrete, but we found that the curing of the concrete wasn’t that critical,” McWade says. “It cured up pretty quickly. We just used normal 32Mpa C2 concrete, and it was cured in 16 to 20 hours to get to 20Mpa, which is pretty typical.”

The region closed off the intersection one half at a time. McWade says it wasn’t all that different from paving with asphalt.

“We still would have needed that room to reconstruct the watermain and pave the asphalt,” he says. “It might have been closed a little bit longer for the concrete paving but it was pretty similar.”

Additional projects
The Region of Durham isn’t the only municipality in Ontario testing out concrete as a solution for rutting and shoving issues in asphalt intersections.

Keri says Concrete Ontario is trying to get municipalities to consider using concrete in its road maintenance.

“We’re not saying concrete is the ideal solution for every application, but a concrete pavement design should be part of every municipality’s design toolbox anytime you are looking to repave an intersection,” Keri says.

McWade believes that there will be more pilot projects popping up that are similar to the one at the Harwood and Bayly intersection.

On camera
McWade was able to capture the majority of the construction and traffic staging on video, using a camera mounted on the traffic signals.

“It’s pretty neat to see the entire operation unfold in a time-lapse video, and hopefully we can learn from this to improve our construction and traffic staging methods on future projects”, he says.