Waterloo explores a new pavement treatment on an aging roadway 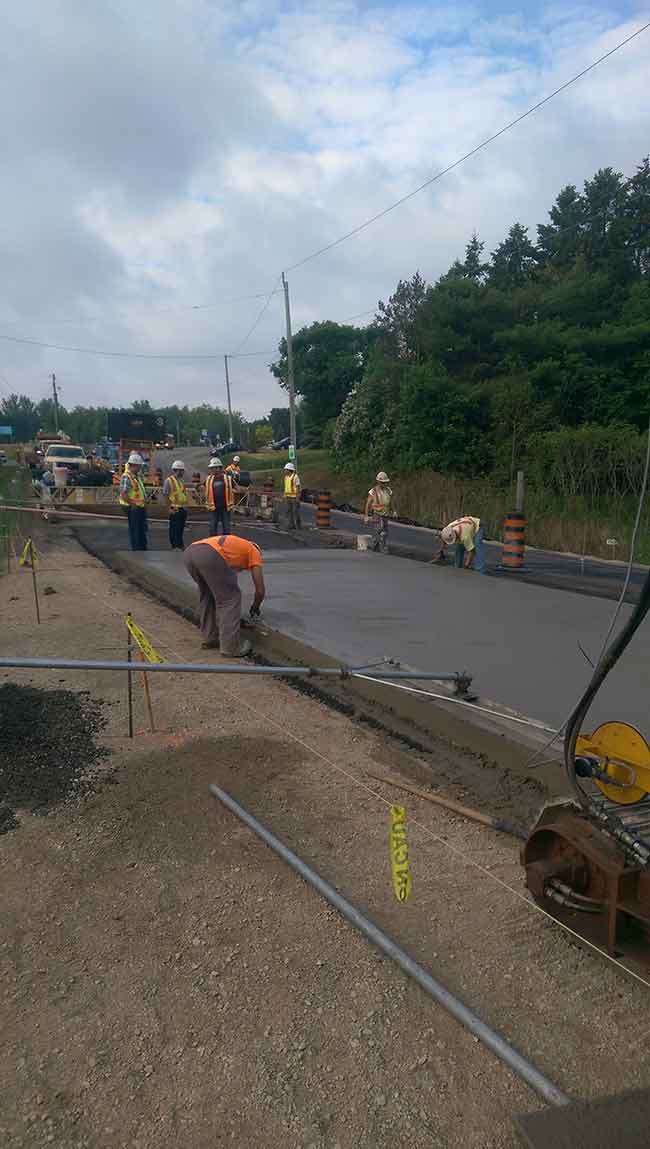 On a stretch of winding rural road at the south end of the Region of Waterloo, Ont. one of a few rural byways connecting the region with its southern neighbours in the County of Brant, the pavement was once again in a state of general disrepair in desperate need of a serious facelift.

For Eric Saunderson, senior project manager for design and construction at the region’s transportation department, it looked once again to be a matter of a simple shave and pave, knowing full well that cracking would occur just a few short years later.

The road in question is a two-lane rural road connecting the communities of Cambridge and Paris. Originally constructed by the Ontario Ministry of Transportation around 80 years ago, the road features a concrete base and a few spots of steep elevation. The roadway has had reflective cracking issues for many years, in part due to sub-surface cracking of the road base.

Saunderson received a geotechnical report on the roadway, which suggested that conventional resurfacing was no longer a financially viable option. A new solution needed to be presented. Automatically, the first thought was that it was time to completely reconstruct the road. That meant removing the concrete, a full rebuild of the road base structure and improvements to the culverts and drainage. It’s a solution with a large upfront, but a solution with the best bottom line long-term.

Or so he thought.

Before making his final decision, Saunderson attended a pave-in demonstration hosted by the Ready Mix Concrete Association of Ontario on Burlington Street in Hamilton. He looked at the concrete overlay solution that was being used on the project, and began to wonder if a similar solution was possible for Spragues Road.

After the event, Saunderson engaged the RMCAO and the Cement Association of Canada in discussions regarding the situation with the Spragues Road project.

“This project was the inaugural project for the RMCAO’s Pavement Design Assistance Program,” says Mick Prieur, senior pavement engineer for the RMCAO. “Eric sent over the engineers’ geotechnical report and recommendations. Based on the report, RMCAO put together several options for concrete paving which depended on the existing condition of the concrete pavement underlying the asphalt. The unbounded concrete overlay was one of the suggestions.”

Following the assessment of the Toronto project, Saunderson and his team retained an ARA to look at the project from a concrete perspective; analyzing each of the options presented by the RMCAO and CAC.

“The investigation concluded that the base itself was in pretty good shape except for cracking at the joints,” Saunderson said.

Because of that fact, he concluded that the concrete overlay had the potential to provide the most promising, and cost-effective, fix for the roadway. The estimated cost savings for using a concrete overlay, versus the full reconstruction alternative, was around $365,000 or approximately one-fifth of the total $1.45 million cost of the project.

The decision was made to proceed with the first concrete overlay project in the Region of Waterloo.

Finding a contractor
The next challenge to face Saunderson’s team was to find a contractor. Obviously the job needed to go through the tendering process like any other roads project, but with few Ontario contractors having experience in concrete overlay, it was a question of who would be willing to step up and bid.

Fortunately, one paving company recognized that concrete overlay was becoming an option for road construction projects throughout the region, and the tender released by the Region of Waterloo was the catalyst needed to pursue its first concrete project.

“Prior to this contract, Capital Paving had yet to complete a concrete overlay,” says Shain Spooner, project manager at Capital Paving. “With more and more clientele entertaining concrete overlay as a proven alternative to conventional road construction, Capital felt that this was the right time to gain the valuable experience necessary to expand the company’s skillset.”

The tender was awarded in August of 2014 with the flexibility to start the project in the fall of 2014 or the spring of 2015. Capital Paving, along with subcontractor Miller Paving, chose the latter, starting the project in April of 2015 with completion by mid-July.

The challenge
The project was not without its challenges. For starters, the region called for new vertical and horizontal alignments to fix some of the issues with the old road. Saunderson said that the elevations used to be “abrupt,” so it was a priority for the new contractor to smooth out those elevations with the new pave.

“It was very critical to determine what the elevation and limit of the concrete base was, along the edge specifically,” Saunderson explains. “So we were milling and re-profiling the surface so that we weren’t disturbing the base.”

That made the design element of the project more difficult than the typical resurfacing job, as did the requirement to keep the road open at all times. The 1.2km stretch could be reduced to single-lane traffic, but never completely closed, and homeowners had to be given vehicle access within 24-36 hours.

Adding to the challenges with sloping, grading and access, there were also strict width restrictions that came into play.

“The size of the paving equipment and the grading equipment required 8.5m+ width within a single lane road (one each direction),” Spooner explains. “This left Capital with very little room for workers and equipment to construct the pavement.”

Miller Paving utilized a Gomaco Commander III single lane paver to complete the task. The Region of Waterloo specified the use of 32 MPa (megapascal) Class C-2 concrete for the project. Hogg Fuel & Supply provided a mix using 40mm aggregate. According to Mick Prieur, former senior pavement engineer for RMCAO, the mix achieved 20 MPa in 14-16 hours and 32 MPs in under five days based on maturity testing.

A stringline for grade was installed on either side running the entire length of the overlay. Concrete supply equated to approximately 40 lineal metres per hour with a 12-person requirement for the operation.

In all, the road was reduced to a single lane for 35 business days for the overlay and widening phases of the project, with the restoration and remedial work, with both lanes open to traffic, taking an additional two weeks. The project was completed by mid-July.

Monitoring the project
Saunderson and his team are working with the Centre for Pavement and Transportation Technologies (CPATT) at the University of Waterloo in monitoring the effectiveness of the concrete overlay project, which he refers to as a “trial project” for the region.

The team is looking at the use of temperature monitors for the roadway, especially for gauging conditions in the winter. The monitors would help provide live information from a deicing perspective to be used in comparison to asphalt pavements to determine if there is a difference when ice forms on the road.

If the concrete overlay continues to stay strong with minimal surface cracking, Saunderson and his team may have found a new solution for effectively rehabilitating roads in the Region of Waterloo.