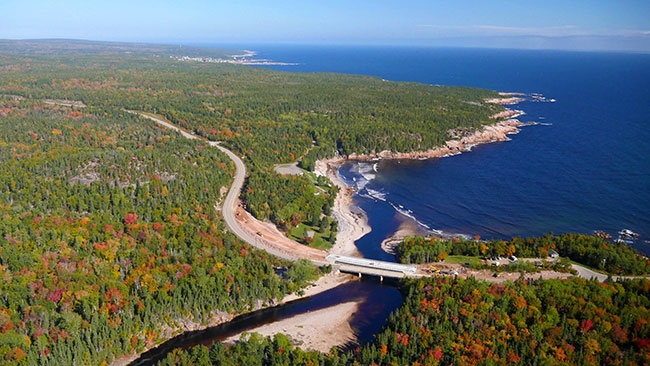 Ranging from 23 metres to 60.5 metres long, they replace aging structures. The Neils Brook Bridge, for example, was built in 1948, just 10 years after the 984-square-kilometre park was created.

Construction began on the $6.5-million, 60.5-metre-long Black Brook Bridge in December 2015, and was completed this June. Built by Zutphen Contractors out of Southwest Mabou, N.S., the bridge design is described by Buyandsell.gc.ca as having a “concrete deck and steel box girders, steel railings, concrete abutments with steel H piles, concrete wingwalls and armourstone protection.” Zutphen realigned 400 metres of road to tie the new bridge into the highway. The old bridges remained open while contractors built the new ones alongside them.

Of the bridge designs, Audrey Buchanan, asset manager for the Cape Breton Field Unit explains, “We strive to standardize the overall look of the bridges; however, the designs are not standardized and various consultants have been used to design each of them.”

Harbourside Engineering Consultants designed the Black Brook Bridge, North Aspy Bridge and Warren Bridge. Speaking to some of the Black Brook Bridge design details, Mark Pertus, architect and project manager with Harbourside Engineering Consultants, says, “The end blocks are a bit more fancy. The railings are consistent with the [other railing] designs in the park. They want consistency in the look – basically the same kind of design in the structure. The use of box girders reduces long-term maintenance. With box girders, half is protected from the weather. You don’t have ledges with birds roosting on them.”

The box girders are integrated with the abutments to reduce maintenance.

“The girders are constructed monolithic with the abutments, so there are no bearings. Typically, there is a joint at the end of the girder. Over time the rubber membrane wears and water leaks onto the bearing surfaces. With an integral abutment, there is no joint. The only joint is at the end of the wing wall. It is off the bridge and much less of a maintenance issue. This joint is paved over, the asphalt sawn at the joint, and flexible liquid asphalt poured in,” Pertus explains.

Zutphen Contractors built the Black Brook Bridge foundations on socketed piles. They sunk steel casings down through the overburden, drilled 20-foot holes 18 inches in diameter in the rock beneath, then installed cage rebar.

Leonard van Zutphen, vice-president of operations for Zutphen Contractors, describes the process the company used to install the two 100-tonne girders, which were transported in three sections per girder. “We assembled them on-site and rolled them across the existing bridge. We used a four-axle tractor, two-axle jeep and a three-axle flatbed under one end of a beam. We put a hydraulic dolly under the other end. We had to do an engineering study to determine that it was safe to move out onto the old bridge. That was a more interesting part of the project, moving the assembled beams on the transporter.”

Zutphen Contractors used two, 250-tonne cranes to pick up each beam from the old bridge and set it in place.

The Black Brook Bridge and roadwork required about 30,000 tonnes of aggregate from Zutphen Contractors’ New Haven quarry, about 10 kilometres away, plus 500 cubic metres of concrete and 700 tonnes of asphalt.

Those beams weigh 40 tonnes apiece. Zutphen Contractors used an 80-tonne crawler and a 110-tonne hydraulic crane on wheels to move them into place. Because the nearest concrete plant was too far away, Zutphen Contractors used its portable, 100 yard-per-hour concrete plant to make the 305 cubic metres of concrete required for the bridge. The bridge and approach required 500 tonnes of asphalt.

Here are a few more details on the other three bridges:

Bedford, N.S.-based Dexter Construction was the contractor for the Warren Brook Bridge. Built for $3.5 million, the 23-metre-long bridge is described by Buyandsell.gc.ca as having a “concrete deck and girders, steel railings, concrete abutments with steel H piles, concrete wingwalls and armourstone protection.”

The road alignment portion of the work ran to about 650 metres. Construction ran from March to November 2016.

Construction of the $6.5-million, 45-metre-long Clyburn Bridge began in April 2016 and was scheduled for completion in September 2017. The contractor was Sydney Mines-based Northern Contracting. This bridge has an interesting design twist: it is curved. The design summary provided by Buyandsell.gc.ca is as follows: “[It consists] of two parallel steel plate trapezoidal box girders (tub girders) acting compositely with a reinforced concrete deck along with a new bridge alignment approximately 130 metres south of the existing structure with a new curve radius of 150 metres.”

Mills Heavy Hauling transported the four girders, which had a total weight of 95 tonnes and a spliced length of 45.6 metres apiece. The subcontractor that lifted them used a GROVE GMK5275 – 275 Ust Hydraulic AT class crane. The drive in took five hours.

The road realignment and the bridge proper required approximately 3,800 tonnes of roadway aggregate Type 1 & 2, and approximately 650 tonnes of asphalt. The aggregate came from various quarries; e.g., Grand Etang, Neils Harbour and Bay St. Lawrence. Alva Construction used a Clemrow jaw crusher and screener, and Sandvik cone crushers. At the peak of construction, 16 workers were on site.

As for challenges in building the bridge, Reg Tramble, engineering manager with Alva Construction that was responsible for tender review, estimating and technical queries material procurement, and subcontractor management throughout the project, says, “Foundation conditions required a major design change from pipe piles to spread footings. The transport distance for concrete was challenging.” And, as one might expect for the Highlands, he notes the challenge of “… access during winter months and steep road terrain to transport equipment over mountains.”

After the new bridges went up, the contractors demolished the old ones: The first to go was Warren Brook Bridge in September 2016, and the last one, Clyburn Brook Bridge, came down this September.