News
Building permits up in October 2017 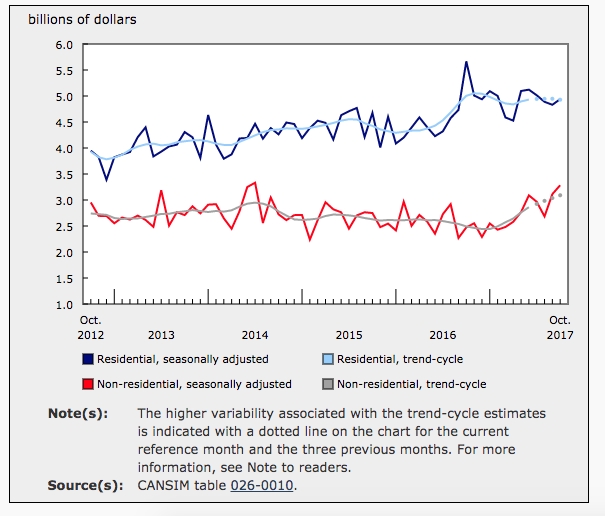 All building components increased with the exception of the institutional component, which declined 14.3%, offsetting much of the gain from the previous month.

The commercial component, which refers to buildings used in the trade or distribution of goods and services, was the main contributor to the 5.5% increase in the non-residential sector. Permits in Quebec for warehouses, as well as permits in Ontario for office buildings, warehouses, and recreation buildings, contributed to the rise in the value of commercial building permits in October.

Ontario municipalities issued $3.5 billion in building permits in October, up 15.3% from the previous month. Just over one-third of the monthly increase stemmed from the higher value of multi-family dwelling permits (+23.1%), which saw its first rise following three consecutive monthly declines.

Quebec municipalities issued $1.7 billion worth of building permits in October, up 21.4% from the previous month. The value of permits for multi-family dwellings led the residential increase (+$127.5 million), while the commercial component (+$127.3 million) pushed the non-residential sector higher.

In Quebec, the value of multi-family dwelling permits was $686.6 million in October, with 78.4% of the value coming from the census metropolitan area (CMA) of Montréal. The value of permits for multi-family dwellings has increased every month since February. This eight-month streak is the longest on record for the province. Multiple high-value permits for apartment condominiums in the Montréal CMA were mainly responsible for the provincial increase in October.