Ontario is deep into work on its 400-series highways 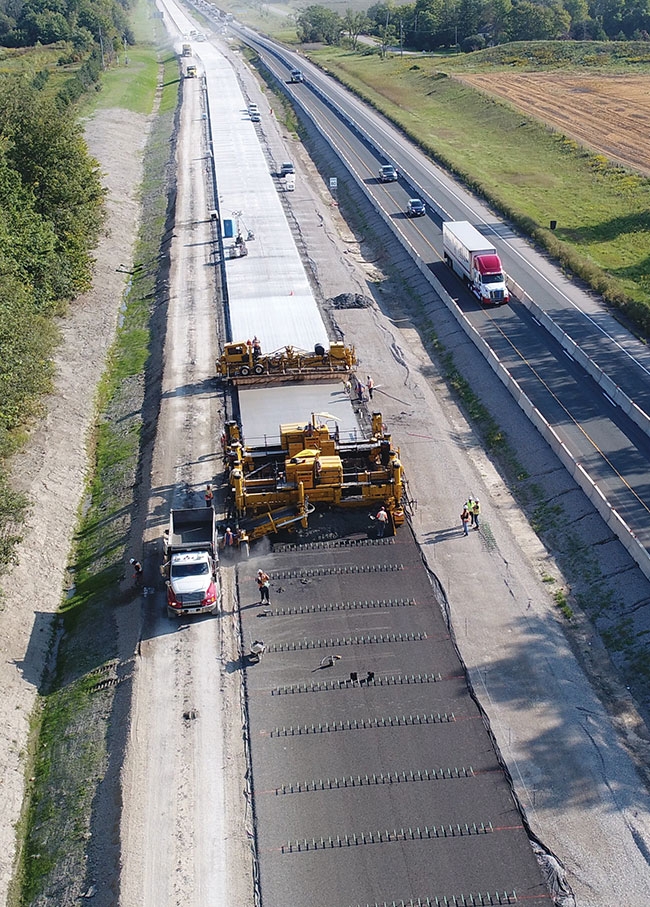 While the greatest concentration of Ontario’s 400-series highways is in the Toronto-Hamilton-St. Catharines area, they radiate west to Windsor and Sarnia, north to Parry Sound, east to the Quebec border and up to Ottawa, and south beyond St. Catharines.

A number of them are undergoing repairs and extensions, and a controversial new one, called the GTA West Corridor, is back on the front burner, it seems.

Also referred to as the GTA West Highway project and Highway 413, this on-, off-, and now seemingly on-again project to cut through the King, Vaughan and Peel and Halton regions would link Highway 400 with Highway 401/407. After years of study it was stalled in 2017, killed in early 2018, resurrected in November 2018 and reportedly bragged up as being back on the radar by Caledon Mayor Allan Thompson in a February 7, 2019 article in the Caledon Enterprise.

A 2016 estimate put its cost at some $5 billion. Opposition to the environmental havoc it would wreak can be summarized in one word: disastrous. Asked about its current status, the Ministry of Transport (MTO) told Rock to Road simply that, “The corridor was referenced in the government’s Nov 21, 2018 Fall Economic Statement, which indicated that Ontario is doing the work necessary to resume the EA (environmental assessment) for the GTA West Corridor.”

Highway 401
A March 27, 2019 MTO backgrounder listing 123 highway build and restoration projects worth $1.3-billion, references 22 on the Central, Eastern and Western Regions of Highway 401, the longest 400-series corridor, at 828 kilometres.

Asked to give a big-ticket example of one of the Highway 401 projects, the MTO offered up the rehab of the “Westbound Express and Collector Lanes from Neilson Road to Warden Avenue and Markham Road, CPR overhead, CNR overhead, Midland Avenue, Highland Creek, Kennedy Road, Birchmount Road, Brimley Road, Milner Avenue, Neilson Road, and McCowan Road, Phase 1A, Toronto.”

Construction is expected to begin this July and last until the fall of 2024.

The MTO stated that the longest Highway 401 project is a 23.6-kilometre pavement rehabilitation from Joyceville Road in Kingston to County Road 32 in Gananoque. This contract is expected to be advertised and awarded in summer 2019 with work anticipated to start in late summer/fall 2019. Also in Gananoque, the MTO announced this February the opening, of a rest area and portable toilet for commercial vehicles at a repurposed truck inspection station.

“Highway 401 is being reconstructed from Elgin Road 20 (Union Road) to Highway 4 (Colonel Talbot Road). Construction started last year and the project is anticipated to be completed at the end of this year,” the MTO stated in a summary of the project.

Highway 407 East
Phase 2 of what the MTO describes as one of the largest highway construction projects ever in Ontario is on schedule and expected to be complete by 2020. The MTO summarises, “The Highway 407 East project is comprised of two P3 projects administered by Infrastructure Ontario and the Ministry of Transportation. It includes the construction and tolling of three highways (Highway 407, Highway 412 and Highway 418). Although connected to the privately operated 407 Express Toll Route, Highway 407 is a separate entity owned and controlled by the province.”

Phase 1, including Highway 407 from Brock Road in Pickering to Harmony Road in Oshawa and Highway 412 (a 10 kilometre north-south highway that connects Highway 407 to Highway 401) opened in June 2016, with tolling starting on Highways 407 and 412 the following February. “Work is continuing to complete Highway 407 through to Highway 35/115,” the MTO stated.

Highway 427
LINK427, a consortium consisting of ACS Infrastructure Canada Inc. and Brennan Infrastructures Inc., is one year into a 6.6-kilometre extension of Highway 427 to Major Mackenzie Drive in Vaughan, north of Toronto. LINK427 is also widening the existing Highway 427 to eight lanes, from Finch Avenue northerly to Highway 7. These two components are a $616-million P3 project with a 30-year concession period. “Completion is anticipated by 2021,” according to the MTO.

Highway 400
Dufferin Construction Company is busy on an $89.85-million project that includes widening 11 kilometres of Highway 400 through Vaughan and King Township. The work began in 2017. Among other things, says the MTO, “The Highway 400 northbound and southbound platform was widened in the vicinity of Major Mackenzie Drive, Cityview Boulevard, Teston Road, Kirby Road and both the northbound and southbound service centres. Ramps at Major Mackenzie Drive, Teston Road and the service centres were also reconstructed on a shifted alignment to accommodate the widening.”

The existing King-Vaughan Road Underpass was demolished and new embankments on both approaches to the structure were constructed. In this year’s construction season, the MTO states, “… the King-Vaughan Road Underpass structure will be constructed. The new bridge, which spans over Highway 400, will be of sufficient length to accommodate the widening of the highway from its current 6-lane cross section to a widened 8-lane cross-section throughout the project limits.”

Nicholas Street Bridge
And in Ottawa, work began this April to replace the Nicholas Street Bridge. To be completed by the fall of 2020, this project includes re-alignment of the associated interchange ramps to fit the new bridge alignment, a short extension of Highway 417 and associated drainage, illumination and roadside protection barriers.

The first stream of the funding, the Rural and Northern stream, is open to cities and Indigenous communities with populations under 100,000. Those communities, about 500 of them, will have eight weeks beginning March 18 to nominate road and bridge projects.

“Our Government for the People is listening and has heard the infrastructure needs of our municipalities,” said Monte McNaughton, Minister of Infrastructure. “This first stream of funding is an invitation to all those communities to get started on the crucial process of project nomination.”

The Investing in Canada Infrastructure Program is a $30 billion,10-year infrastructure program with cost-shared between federal, provincial and municipal governments. The Province of Ontario will be responsible for upwards of 33 per cent of the funding, or $10.2 billion spread across four streams: Rural and Northern; Public Transit; Green; and Community, Culture and Recreation.

The Grants Ontario website (click on Grant Opportunities) will be a “one-window” source for applicants, handling application intake, review, nomination, reporting and transfer payment management processes – all in one place.

“The Association of Municipalities of Ontario (AMO) welcomes this federal and provincial commitment to infrastructure funding across our province. Rural and northern communities depend on safe and reliable roads and bridges. They are essential to local quality of life and prosperity. Importantly, the ‘one-window’ approach that Ontario and the federal government have put in place will offer Ontario’s municipal governments an efficient means to access infrastructure funding,” said Jamie McGarvey, AMO president and Mayor of Parry Sound. Source: Government of Ontario.