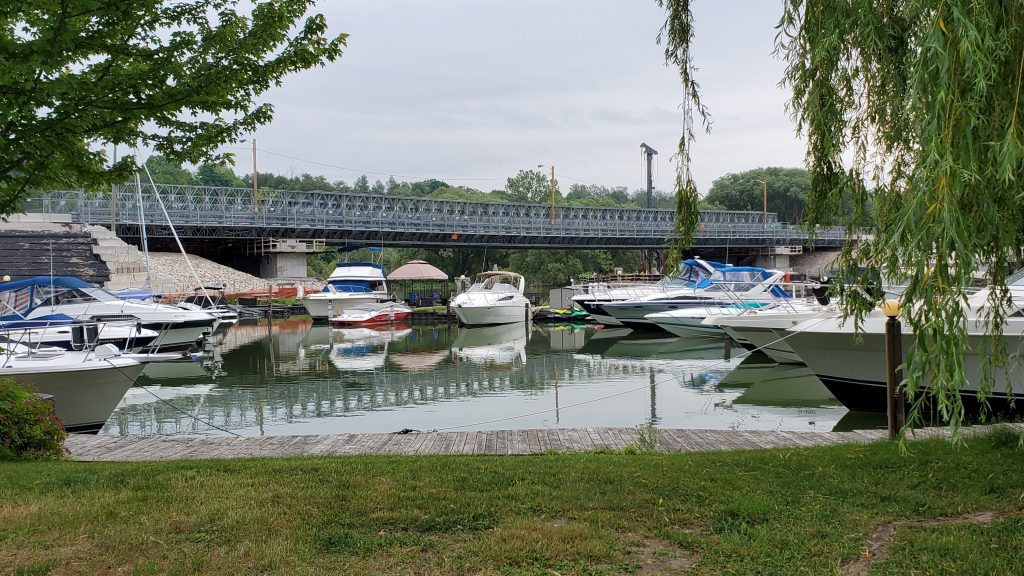 The Bayfield River Bridge, a 70-metre-long two-span deck truss bridge on Highway 21 was constructed in 1949. By 2017, it had reached the end of its service life and preliminary planning for a full replacement was initiated. As the route provides critical access not only for local residents but also for the region’s significant tourism industry, the approved project necessitated the installation of a temporary bridge to provide an on-site detour for vehicles and pedestrians while the replacement bridge was being rebuilt.

The modular steel detour bridge designed and supplied for the project consists of three spans of 18.3m, 76m and 18.3m for a total length of 112.6m, with a roadway width of 9.1m and a live load of two lanes of CL-625-ONT. The bridge has a TL-4 guardrail system, a 1.5m cantilevered sidewalk, and features an anti-skid epoxy aggregate deck surface.

The long length and heavy weight of the main span created numerous challenges to the launching and erection of the bridge. Due to the minimal footprint available to assemble components on-site, the components were delivered in stages to accommodate installation. The bridge was erected on rollers, with additional rollers on top of the piers required for ease of erection and a safe launch. The bridge was then moved to its final position, lowered and set on both abutment and pier bearings to complete construction.

Delivered to contractor Looby Construction in mid-February, the rental bridge was constructed in about four weeks and opened to traffic on April 13. It will remain in service for a minimum of 10 months while a replacement bridge is being built.

“In addition to the obvious safety benefits, detour bridges allow traffic to be maintained at full capacity and speed during construction, decreasing the impact on the traveling public and local businesses,” said Gordon Scott, director of operations and sales, Acrow Limited. “They also offer significant cost-savings by helping ensure a project stays on schedule – a key benefit for both contractors and government agencies alike.”

Bill Killeen, Acrow CEO added, “The rental market has gained a strong foothold in the highway construction industry for its many benefits, and I will add to Mr. Scott’s words by writing that this Acrow bridge will also provide significant regional trade benefits through the flow of commerce not being restricted.  Acrow modular bridges are also an ideal solution for use as permanent structures as they are manufactured with high strength, high quality U.S. steel from ISO-certified mills and galvanized to protect against corrosion.”