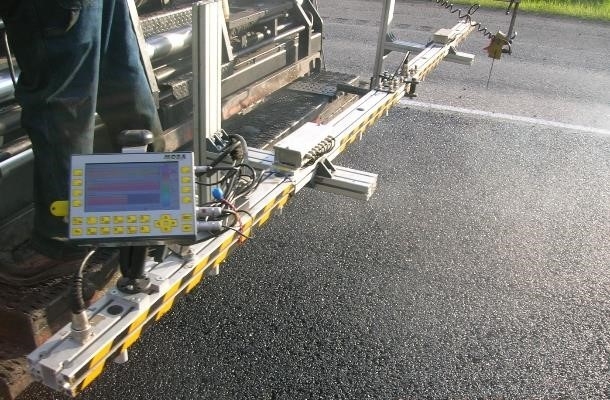 January 9, 2018 – The Alaska Department of Transportation & Public Facilities is on the front line when it comes to promoting new technologies that give them continuous, full-coverage asphalt pavement density testing for road paving projects.

Unlike traditional random sampling, continuous testing uses multiple inputs to “look for” failure zones and has a high probability of detecting defects before they lead to premature failures. The system they opted for combines intelligent compaction (IC), a paver-mounted infrared (IR) thermal profiler/scanner, and ground-penetrating radar (GPR) rolling density meter. Now, Alaska DOT is moving towards a system that will tie project acceptance to data from this system. They plan to offer bonuses for increasing the asphalt compaction averages – and require remediation for compaction below the standards.

Transportation officials look for new pavement sampling paradigm that promotes quality
For the past 40 years, state departments of transportation across the United States have been basing quality measurement testing for road paving projects on random sampling of materials. For example, one lot of asphalt is 5,000 tons, which is divided up into 10 sub lots of 500 tons each.

Quality assurance (QA) personnel use a random number generator to select where each sublot would be sampled while placing the mix on the grade to check for oil and the gradation of the aggregate. They then randomly select a separate location to take a core in the paving mat and at any longitudinal joints between two lanes. QA personal then use statistical methods on these random samples to generate information on the theoretical distribution of road paving material properties, and to calculate the average density of material placed.

This method does not sit well with Rich Giessel, Alaska Department of Transportation & Public Facilities Statewide Quality Assurance Engineer, who maintains that there are numerous problems with random testing. It is not suitable for heterogeneous materials and will not find defects on paving projects.

Giessel believes the method is based on two false premises. The first is the assumption that soils and other road construction materials will fall on a “Gaussian” distribution (a normal curve), which he says they almost never do. The second false assumption is that we should care most about the average density values one gets from random testing.

This is just not so, says Giessel, “Random sampling is a really good way to get the average, but when you are doing one test that represents one square foot every 500 tons there are thousands or hundreds of thousands of square feet we have not even looked at. Also, the average spot is never what gives us a problem or a failure on the road – it is the weak spots. Random testing never finds your low spots and your weak spots so there is little to no probability of locating pot-hole size defects.”

With IC, compaction rollers are equipped with accelerometers and computers that measure surface density and rebound, or relative stiffness. This is related to the materials’ Resilient Modulus (MR), a measure of material stiffness that is used for designing traffic loads. IC offers geo-located data, continuous full coverage real time compaction coverage of the entire hot mix asphalt mat, along with temperature mapping at the time of the roller pass.

Next is an IR thermal profiler mounted on the paver, which provides a continual map of the temperature of the asphalt as it is laid down right behind the paver. The thermal IR scanner provides geo-located data, a complete map of asphalt mat surface temperature that is viewable in real time, and calculates the degree of thermal segregation every 150-feet, providing a permanent temperature record.

The last element in the system is the ground-penetrating radar (GPR) asphalt density meter, which evaluates void content, rolling along and taking a measurement every square foot of the pavement after compaction. This is a huge advance over the prior random sampling method. Instead of 50-100 random tests, the GPR method provides 2.5 million tests – one on every square foot. This enables QA personnel to finally be able to find defects. Since the method provides geo-located data, they can go back and fix issues before they lead to premature failures like road ravelling, cracking, and deterioration along joints.

The ability to measure voids is a major benefit, since inadequately compacted asphalt deteriorates much more quickly than properly compacted material. Asphalt with too many air voids ages at a more rapid rate due to oxidation of the binder. Over-compaction may cause crushing of aggregate or low air void content, leading to rutting or flushing. In either case, the asphalt is subject to early failure and road lifetime is less than asphalt that contains the optimal air void content. Construction engineers are always looking for optimal compaction, and by measuring density variations they can calculate the air void content.

New system in action
Alaska DOT conducted demonstrations of the PAVE-IR technology in 2011 and began using intelligent compaction in 2013. While visiting an infrared showcase, Giessel saw a demonstration of GSSI’s PaveScan RDM, and had the opportunity to see the tool in action.

“I got to walk behind it and watch what it was doing and I was pretty excited about the technology and what it could do for us in Alaska,” he said.

Giessel got the opportunity to use all three components together as part of the recently completed Glenn Highway: Hiland Road to Eklutna Pavement Preservation project, 15 miles of 4-lane expressway, requiring a bit more than 50,000 tons of asphalt. This was a two-inch “mill and fill” project, where contractors milled out an inch and three quarters or two inches and put back two inches of material.

Beginning in 2016, Alaska DOT used the IC and PAVE-IR paver-mounted thermal scanner technologies as contractor pay factors as part of project acceptance. The PaveScan RDM asphalt density assessment tool was used as a technology demonstration only. They obtained full coverage data, but did not connect the information to any pay factors.

Giessel is extremely pleased with the results of the project, noting some unexpected findings. One had to do with the PaveScan RDM’s data concerning compaction at the road shoulder. The project called for milling out and leaving a paved shoulder with a rumble strip. QA engineers found that in some cases the asphalt was not stacked high enough above the paved shoulder to get really good compaction. In the past, they had rarely cored near the edge, so had not observed this area of low compaction; the random selection almost never got within a foot of the rumble strip. Now, the PaveScan RDM measures every couple feet across the road, and engineers were picking up on the shoulder compaction issue.

Another interesting finding observed during calibration is that PaveScan readings are much closer to the cores than the nuclear gauge, which had always been their standard proxy for cores. The correlation coefficient (R2) for the nuclear gauge is only .82 (82 percent accurate), while the R2 with the PaveScan was .93-.95 (93-95 percent accurate), which really boosted their confidence in the data they were getting.

One other significant finding is the ability to use PaveScan to “see” defects they have never seen before, for example, density variation across a longitudinal joint.

“We had never been able to see what was going on at those longitudinal joints before,” explains Giessel. “Instead of just running parallel down the highway, I turned the PaveScan 90 degrees and went across those joints perpendicularly. We could see as much as a 10 per cent compaction dip right at the joint between the milled edge and the new hot mix were the hot and cold edges had not melted together well. That was data we had never been able to see before, so it was pretty exciting.”

They recently received a STIC (State Transportation Innovation Council) incentive award from the FHA, and they want to use the funds to implement this technology more fully.

“We want to use PaveScan RDM on a project in the near future for actual acceptance of the compaction of the highway,” Giessel said. “Instead of the drilled cores that we are currently using, we would use the drilled cores only to calibrate the machine at the beginning of the project. Then we would accept the density on the rest of the project based on the GPR readings. That would be a huge step forward for us.”

Alaska DOT is looking forward to moving away from using statistical methods to generate a distribution of values because, even if the average value is good, there could still be weak areas that are below paving standards. These are more likely to cause early failures and maintenance costs, as well as additional costs due to the need for repaving earlier than planned. With their new technology, they can locate specific weak areas that are below established standards.

For the upcoming STIC project, Alaska DOT proposes paying the contractor based on the average compaction value, with a bonus (up to 5 percent) if he gets the average up to 96 percent. However, if compaction is below 92 percent, the contractor will have to remediate it by going back and applying a sand seal with an appropriate sealer/binder on all low mat sections and joints.

Giessel anticipates that this carrot and stick approach will encourage contractors to pay more attention to quality control up front, so they do not have to go back and perform any required remediation. “We hope their game will be dialed up a bit when they have to go back and fix areas they missed if they do not compact well. It will raise everybody’s awareness of quality work. Basically, we will have no potholes left behind with this program.”

Support from Federal Highway Administration
As the first state proposing to use the new system for acceptance, Alaska has received encouraging support from the Federal Highway Administration, which likes the idea of fixing things that are not right before the contractor leaves the project. They also support the idea of not having to fund another project prematurely because something was not done well. It is just good economic sense to do everything right the first time. This technology and implementing this type of specification has the potential to save the state millions of dollars in annual maintenance.