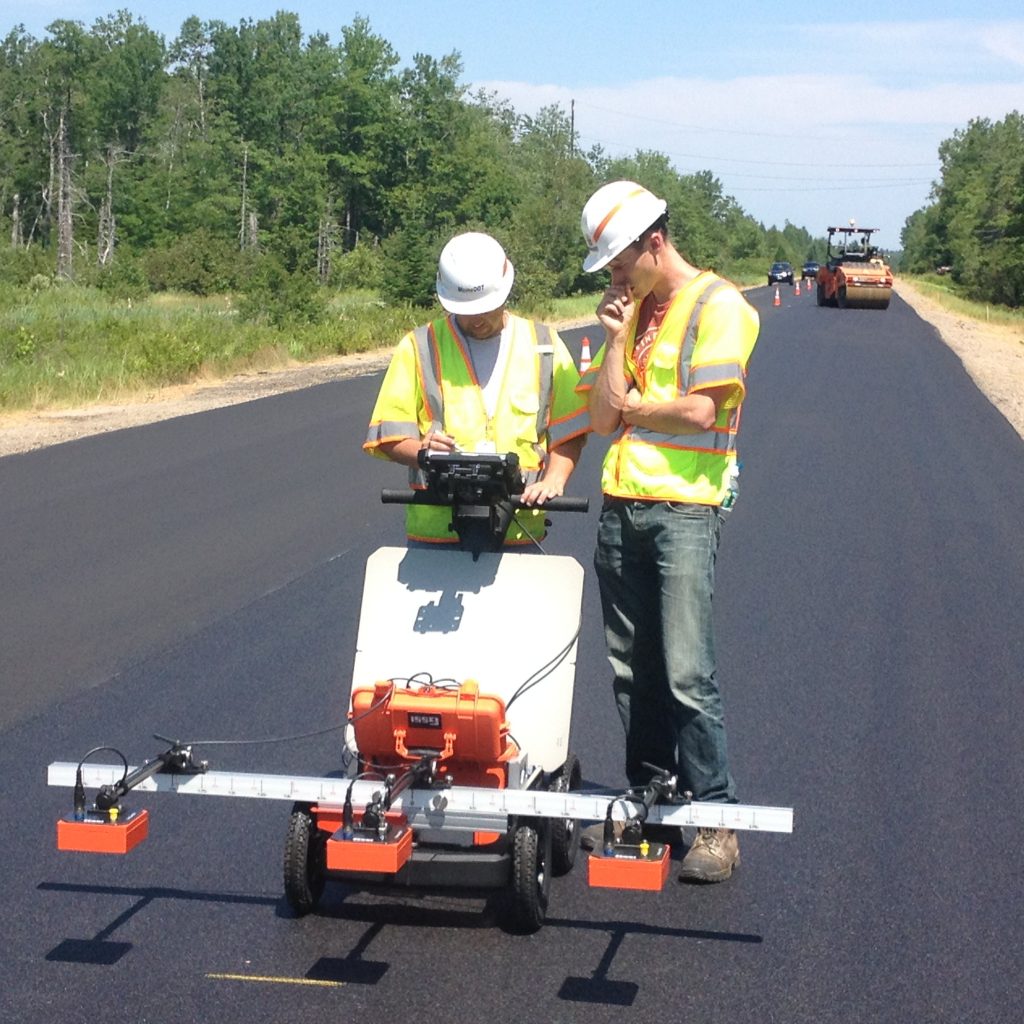 November 3, 2016 – Properly compacted asphalt is a major factor in the lifespan of roads, since inadequately compacted asphalt deteriorates at a more rapid rate than properly compacted material. With the billions spent on road construction and repairs each year, it has become a matter of urgency to find new technologies that can ensure the integrity of asphalt on newly paved roads. New radio wave technology is now available to non-destructively determine asphalt density during application.

Asphalt installation and compaction basics
The air void content within asphalt varies based on the amount of compaction during asphalt emplacement and variations in the asphalt mix composition. Asphalt with too many air voids (often considered to be more than 8 per cent) deteriorates at a more rapid rate. Too few air voids (less than 3 per cent) results from over-compacted asphalt, which is also undesirable. In either case, the asphalt is subject to early failure and the road’s lifetime is less than asphalt that contains the optimal air void content.

Construction engineers are looking for that “sweet spot” where the compaction of the asphalt when it is laid down is optimal. They typically assess asphalt by measuring density variations, which can be used to calculate the air void content.

To ensure optimal compaction, asphalt should be kept at a specific temperature range as it is being laid down. If the paving machine and transfer vehicles do not do a good job keeping the material uniformly hot, there can be “cold patch” areas. When the roller rolls over areas not within the optimal temperature range, it cannot properly compact the material. For example, such cold patches may occur if the asphalt paver is refilled from end-dump trucks, which cool the asphalt more near the metal sides and end of the truck than in the middle. Some poorly-paved roads have regularly spaced defects associated with end-dump truck refills.

One may not be able to notice these areas at first, but they may become obvious later. In fact, there are many roads where one can observe a cold patch every several hundred feet that is starting to deteriorate – turning into a ravelled section in the road. If the work crew does not catch the problem during paving, the road may need to be repaved far sooner than if the material was properly applied.

Another compaction issue occurs when the established “rolling pattern” is not properly followed. The rolling pattern refers to the number of times, speed, and lap pattern rollers should employ when rolling new asphalt to achieve the optimum compaction. If the paving crew misses a section and does not compact the material with the proper number of rolls, they can create areas where compaction is faulty.

Discovering and correcting any rolling pattern issues during the first few days of a paving job benefits both the owner and contractor, since contract specifications may include requirements on how asphalt is laid down in terms of acceptable void content. Contracts may also include a bonus for getting to the specific asphalt void content range – or a penalty if the crew goes outside the specified void content range.

Options for measuring asphalt density and void content
There are several available methods that can be used to measure asphalt density variations, which are then used to calculate void content variation. One non-destructive testing (NDT) method is the nuclear density gauge, which consists of a radiation source that emits a cloud of particles and a sensor that counts the received particles that are scattered back by the test material. By calculating the percentage of particles that return to the sensor, the gauge can be calibrated to measure the density and inner structure of the test material.

While quite accurate, the nuclear gauge has several disadvantages. The gauge is placed on asphalt and measurements are taken over a specific period of time, usually a few minutes or less. The method requires contact, with the device required to remain stationary at the measurement point. Due to the length of time required for the measurement, nuclear gauge measurements are taken sparsely, on the order of a few measurements per 100 lane feet. Collection of only these “spot” measurements does not adequately capture all the asphalt’s variability. Also, because it uses radioactive material, the nuclear gauge requires user training and secure storage. There are also special transportation requirements. Re-licensing, maintenance, and recalibration fees run about $2,000 per year.

Because the nuclear and non-nuclear density gauges may collect only one value over a large area, they are unable to catch all the variations in void content that may be important to ensuring a quality paving job.

Another NDT option is the use of radio waves, which can be used to obtain real time measurements over a large swath of pavement in short periods of time. Radio wave reflections from the asphalt can be used to directly calculate the asphalt dielectric values, which are then correlated with the new pavement’s void content, a relative indication of density.

One other method that should be mentioned is “coring,” a destructive method in which one physically extracts a core from the asphalt and measures its properties. Coring is used as a primary asphalt compaction evaluation method and is always used to “ground truth” measurements from other methods. Coring is done on a very limited basis, so it often under-represents the true variability in asphalt void content.

New radio wave technology used to help improve asphalt mixture quality
The initial relationship between void content and road condition has been known for a long time. In the late 1990s, researchers at the Texas Transportation Institute (TTI) discovered the relationship between the dielectric calculated by ground penetrating radar (GPR), an application-specific use of radio waves, and void content.

Researchers later developed a working methodology for use of infrared and radio wave technologies for improving the assessment of asphalt mixture and compaction quality. They then looked for a way to commercialize it so it could be easily used by state departments of transportation.

Previously, use of the GPR technique required specialized equipment, a great deal of data interpretation, and a number of manual steps. In 2013, TTI began working with GSSI to package the device components into a streamlined and operator-friendly device that would provide real time profiling of asphalt mixture uniformity. The work was done as part of the Federal Highway Administration’s Strategic Highway Research Program (SHRP 2).

Over the next few years, GSSI developed the technology into the PaveScan RDM, which TTI used in several pilot studies. The non-contact PaveScan technology uses a sensor that typically outputs a measurement each half-foot along the lane traveled, so a mile’s worth of data includes roughly 10,000 measurements for each sensor used.

TTI found that the new PaveScan system overcomes hardware, data processing, and staff expertise hurdles that existed in the past. According to TTI, “The utility of GPR was realized on all pilot projects, where the radar results provided quantitative assessment of density and uniformity.”

GSSI later developed a three-channel system that can be vehicle-mounted to obtain moving void content measurements in one pass, covering both wheel paths and between the wheel paths. One sensor is located in one wheel path, one in the middle and one in the other wheel path – so three measurements are output for each half-foot along the lane traveled. In this way, a mile’s worth of data includes roughly 30,000 measurements – all collected in a mere 20 minutes.

The PaveScan RDM system has a number of benefits. First of all, it is a way of ensuring asphalt integrity of newly paved roads. Now, when a contractor lays down a new road, the asphalt void content over the entire area paved is accurately calculated, so both contractors and the owner of the road are satisfied. Secondly, the system is easy to use, bringing down the level of expertise needed to a manageable level. Thirdly, it is a very rapid method, adaptable to being put on a vehicle. The safety benefits of not having someone standing in a lane next to moving traffic are huge.