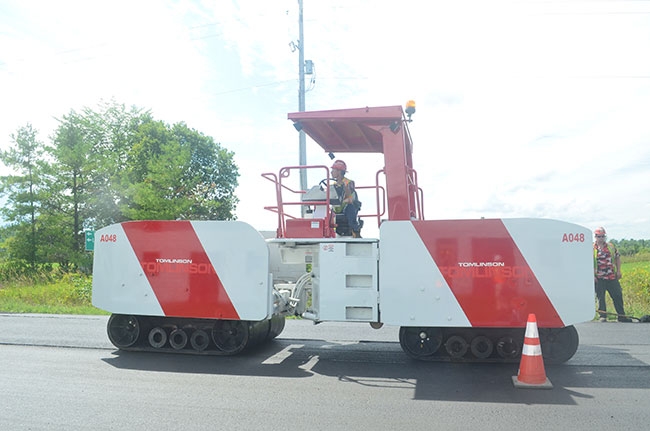 At the head office for the Township of South Stormont in the Cornwall area, the Ontario Asphalt Paving Council (APC) of the Ontario Road Builders’ Association (ORBA) hosted its first Pave-In event since 2012.

The reason for the event was to highlight the AMIR-TRAK compaction technology conversion roller kit for pavers.

Approximately 60 people, including contractors, local municipal employees and members of the Ministry of Transportation of Ontario, were in attendance to learn more about a new technology in a field where new technologies are few and far between.

The technology was invented by Carleton University’s director of the Infrastructure Program and International Security Master’s Program, Dr. A. O. Abd El Halim, who spent the majority of his 35-year career working on the technology and perfecting it through research, trails and tests in Canada, Australia and Egypt.

Halim, who is set to retire later this year, offered the first presentation of the day telling the crowd that he is happy that Canada will offer a new technology to the world for improving roads everywhere and create significant cost savings for taxpayers. He added that getting the technology to this point has been a huge challenge throughout his career.

Contractor perspective
After two unsuccessful trials with contractors in Ontario, the AMIR-TRAK technology found success with the Ottawa-based Tomlinson Group in 2012; after the Ministry of Transportation Ontario resurrected the project to find a solution to asphalt that was
deteriorating on Ontario’s roads at an unacceptable pace.

Ken McIntyre, heavy civil contract manager for Tomlinson Group, discussed why the AMIR/TRAK technology is so appealing from a contractor’s perspective. The main reason is that the technology could require less rollers to complete a paving project. This is appealing for many reasons including a reduced skilled labour force being needed at a jobsite.

“One of the first things that we’re trying to get to is the number of overall rollers required to do the job, because everyone is very well aware we’re having a tough time attracting people to the industry. We have a very minimal skilled labour operator force coming into the industry. Asphalt paving – short season, long hours – it’s hard to attract anybody to that,” McIntyre says. “If we’re able to reduce the amount of rollers, essentially you’re reducing the amount of folks you need operating them.”

Increased competitiveness from using fewer rollers is another benefit of the technology.

“If we’re capable of achieving similar or greater results with fewer rollers, we obviously will be a lot more competitive in the market. If we’re pricing with one single roller compared to a company that’s got three rollers in the fleet then we should get a leg up on them,” McIntyre adds.

Additional benefits from fewer rollers include reductions in greenhouse gas (GHG) emissions, and reductions in fuel and hydraulic oil usage.

Another area where the AMIR-TRAK has offered Tomlinson advantages is in bridge deck paving.

“You ask any contractor in this room to price a bridge deck to pave, they usually shudder at it, because we’ve all had bad experiences in the past,” McIntyre said. “The AMIR-TRAK roller, in our experience, has been an excellent candidate for bridge deck paving. We’re able to pave both lifts in one single application (80mm or 100mm). It’s made our life a lot easier when it comes to paving bridge decks. The other thing, too, is that bridge deck paving is typically slower going, the guys are really taking their time on it – you’ve expansion joints to work with. The Rue Milles Bridge had six or eight expansion joints across it, and that is just a nightmare for a paving crew when they show up to see that, to try and tie into everything and maintain drainage… it’s just some of the hardest paving. The guys will pave the 401 and downtown Toronto before they go pave a bridge deck.”

The quality of the asphalt compaction has also improved significantly.

“We’re able to get better, or as good, compaction at lower compaction temperatures, so it’s also allowing us to pave slower and get that quality because we’re able to compact a quality mass,” McIntyre told the crowd, adding that the AMIR-TRAK allows for a tight mat to be created with consistent texture and no coarse aggregate loss.

Being able to perform at lower temperatures is particularly important since much of the bridge deck paving takes place late in the construction season at colder temperatures, since the majority of the peak season is typically spent on the building of the bridges.

Technology in action
Frank Pinder, area contracts engineer for the MTO’s Eastern Region, offered the crowd results from some of the MTO’s field trials that have taken place between 2012 and 2019, and discussed the potential benefits of the AMIR-TRAK technology from the government’s perspective.

“An analysis that our pavement management people did for us a little while ago showed that if the asphalt in Ontario could be extended even one more year, that would save the province $50 million a year in asphalt costs alone,” he told the crowd.

The field tests that Pinder discussed included an early trial with the AMIR-II prototype in 2012, when Tomlinson became involved with the trials. In September 2012, the first trial was successfully completed on a 500-metre stretch of pavement on Highway 28 in Apsley, Ont., just over 60 kilometres north of Peterborough, Ont. The MTO used Superpave 12.5 FC1 mixes for the field tests. Pinder was quite
impressed with the technology.

“The mat compresses significantly after one pass,” he said. “When I see a single roller go over a job, quite often it seems to just be gliding across the surface. But with the AMIR, you could see pressure right away… you can stand behind the AMIR roller and you can see the difference.”

In November 2014, the MTO performed another field test with the AMIR-TRAK compaction technology with the Tomlinson Group on a Highway 417 underpass at Highway 34 using a Caterpillar D-Series paver. The AMIR-TRAK placed a single 80-mm lift (ambient temperature of -1C), which was compared to a conventionally placed 40-mm lift placed in August 2014. The results of the two paving jobs were compared four-and-a-half years later in July 2019. Pinder said that the conventional lift was exhibiting moderate coarse aggregate loss; while the AMIR-TRAK paving job showed very little wear and coarse aggregate loss.

Most of the other field tests Pinder presented on showed similar positive results for the AMIR-TRAK technology.

In the conclusion of his presentation, Pinder discussed the advantages of the AMIR-TRAK technology after seven years of MTO field tests.

There’s a potentially huge impact to municipalities and cities,” Pinder said. “If we can stretch our dollars a little bit further, that would be a tremendous benefit for the taxpayers.”