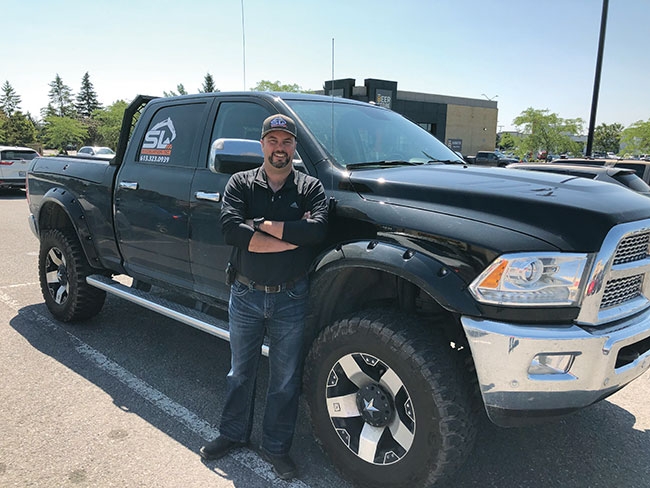 Steve Lafontaine has always wanted to start up his own business. Even in his childhood, he dreamt of the day he would own some big iron.

“It’s something I had in mind for the last 20 years,” Lafontaine says over breakfast at a diner in Kanata, a suburb west of Ottawa. “Even when I was a kid, I wanted my own equipment.”

Lafontaine has been around heavy equipment since working for his father during summer vacations at the age of 12. By the time he was 14, Lafontaine was working with his father at a heavy equipment repair shop in the Maniwaki, Que. area, close to where he grew up; and his uncle was active in the forestry sector.

“I have an uncle with a logging truck, and any chance I got, I was in the truck up in the bush with him,” he recalls.

Lafontaine left school when he was 17 so he could work full-time at a Canadian Tire parts department, until an opportunity came up to get into the forestry sector.

“My dad knew someone that needed a log loader [operator], so I worked the night shift,” Lafontaine says.

Shortly afterwards, he got his AZ truck license so he could haul sand and gravel for the logging roads. Lafontaine worked there until a friend offered him an opportunity to cover him temporarily at his job hauling logs in northern Ontario.

“He needed two weeks to go and see family so I drove 12 hours to cover for him,” Lafontaine recalls. “The company needed another log loader operator, so a couple of weeks turned into four years.”

After four years working in the forestry sector, Lafontaine wanted to try his hand in the construction sector so he moved to Ottawa and started working as an equipment operator for a local contractor, operating excavators, backhoes and dozers. He eventually became a foreman in addition to being an operator and worked there for 10 years.

“I used to come in the morning and get all of the grade and survey equipment ready for the guys, operate all day, then do the paperwork at home,” he says.

From foreman on one job, he grew to overseeing multiple jobs at once, in addition to continuing to operate equipment. After a short stint with another contractor that didn’t work out the way he had planned, Lafontaine worked on the Ottawa LRT project as the general superintendent for three years. After that project was finished, the company asked Lafontaine to relocate to either Toronto or Montreal. Uninterested in a move, he decided to go to work for Ledcor, locally, as a project superintendent for infrastructure work.

“I was there from August to May, and that March was when I decided to start my own business,” he recalls. “As a superintendent, I didn’t have the same satisfaction from getting the job done. When you build a nice wall or a nice ditch, you get that [satisfaction]. Every time I would sit on a piece of equipment, I’d remember how much I missed that.”

Making the leap
While living in Ottawa, Lafontaine was finally convinced to take the leap into entrepreneurship by his girlfriend, Cynthia.

“My father-in-law had passed away and we had a little money to invest, and she pushed me to go for it,” he says. “She said, ‘We’re going to do it. This has been your dream for a long time, we’re going to make it happen.’ So we sat down and made a budget.”

The day Lafontaine decided to purchase his equipment, Cynthia came with him to the dealership so they could experience the beginning of SL Excavation Inc. together.

“I had prices for all types of equipment,” Lafontaine recalls. “I always wanted a Volvo but the John Deere financing was amazing – zero per cent financing and zero interest for five years.”

Lafontaine ended up purchasing a John Deere 210G excavator with a Rototilt attachment.

“I saw Rototilt at a demo 15 years ago in Ottawa. Ever since then I told myself I would buy it one day,” he says. “It’s a lot of money up front, but it pays off in the end.”

He also added a Trimble Earthworks 2D system with automatic guidance. And it certainly didn’t take long for the equipment to see some action. On Friday, May 31 at 10 a.m., the excavator was delivered to Lafontaine. It didn’t even sit idle for one day.

“At 3 p.m. on the same day, I got a call from Jeff Tomlinson [heavy equipment supervisor for the Tomlinson Group of Companies]. He picked up the machine on Saturday morning  [brought to a local work site] and I’ve been working for Tomlinson ever since,” Lafontaine says.

Tomlinson was immediately happy with Lafontaine’s performance. They offered him a two-year contract and a higher rate so he could upgrade his 210G with a Trimble Earthworks 3D system so he could keep running all-year round.

“The Trimble Earthworks system and the Rototilt were a big investment but made a huge impact in my success so far,” he says. “When I come to a jobsite, the contractor sends the job file directly to my machine. I can do most of the work independently. In most cases there is no surveyor or grade man needed. The automatic and the Rototilt together is a huge time saver. Most operators will say they don’t need the automatic because they can pull grade; however, pulling grade with this system is way more efficient – and time is money, after all.”

Unlike most contractors, Lafontaine fabricates some of his own attachments.

“I didn’t even have the excavator yet and I had two attachments ready for it,” he says. “I made a grading beam, a long-nosed bucket for digging around utilities, and I’m making an adaptor so I can put forks and a sweeper on it.”

Future plans
Although things have been moving fairly quickly since Lafontaine started up SL Excavation, he isn’t planning on growing things too big or too quickly.

“If everything goes well, I wouldn’t mind buying a second shovel and putting an operator on it,” he says. “Maybe get some rock trucks, since there’s a need for that. I don’t think I’d want to get much bigger than that.”

If things don’t work out as planned, Lafontaine still isn’t too concerned.

“There’s so much work in Ottawa that if it doesn’t work out, I can still go back to being a superintendent,” he says.